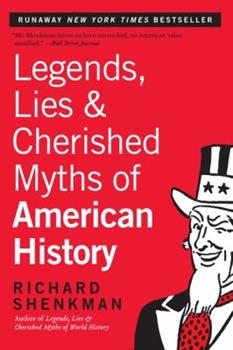 The truth and nothing but the truth Richard Shenkman sheds light on America's most believed legends. The story of Columbus discovering the world was round was invented by Washington Irving. The pilgrims never lived in log cabins. In Concord, Massachusetts, a third of all babies born in the twenty years before the Revolution were conceived out of wedlock. Washington may have never told a lie, but he loved to drink and dance, and he fell in love with...

Published by Thriftbooks.com User , 11 years ago
This is one of the bett history books I've ever read. This book discuss the history that we were never taught in school.

A lot of fun

Published by Thriftbooks.com User , 13 years ago
I bought this for my teen-age son, who is homeschooling, and he loves it. Actually, I learned a lot, too!

There's a lot of bunko in this world...

Published by Thriftbooks.com User , 19 years ago
...but Richard Shenkman tries to give us the critical eye to spot it. This book, though dated and somewhat sketchy in places, at least has the gumption to stir up controversy and allow us to see that history is not the cut-and-dried, "objective" science we've been led to believe. The lists in this book are incomplete, they often contain unproven assertions, and sometimes are a little slipshod. However, no claim is made that these are the final facts, but rather that these are alternate, iconoclastic views that allow you to approach history, not as a sponge to absorb the broad assertions of which teachers are so fond, but as a critically thinking human being ready to separate the wheat from the chaff. Enjoy in good health and don't believe anything just because somebody told it to you!

Learn the History You Didn't Learn in School

Published by Thriftbooks.com User , 19 years ago
This amusing book, by news reporter Richard Shenkman, puts to rest many American myths that we have all been taught growing up. Shenkman tackles explorers, the founding fathers, presidents, the family, education, holidays, art, and quotations, effectively disproving many of America's most cherished myths.Shenckman shows that:- George Washington never chopped down a cherry tree.- Scientists didn't think the radiation from the first nuclear bomb would kill anyone.- Abraham Lincoln was not poor.- The U.S. was warned it would lose in Vietnam.- Charles Lindbergh was not the first man to fly across the Atlantic nonstop.A fun and entertaining read!

So, you think you know your American history

Published by Thriftbooks.com User , 19 years ago
Fascinating, if somewhat controversial, look at our past. Whimsy mixes with fact as some of the "beliefs" surrounding our origins as a nation, our leaders, and our traditions are revealed in this "Cliff notes" journey into Americana. This is light bathtub reading with its text simple enough for all to appreciate and savor.
Copyright © 2020 Thriftbooks.com Terms of Use | Privacy Policy | Do Not Sell My Personal Information | Accessibility Statement
ThriftBooks® and the ThriftBooks® logo are registered trademarks of Thrift Books Global, LLC