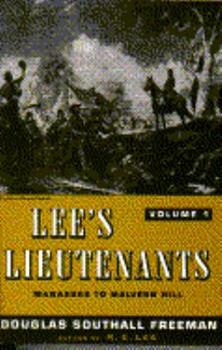 (Book #1 in the Lee's Lieutenants Series)

This description may be from another edition of this product. All unquestioned masterpiecc of the historian's art, and a towering landmark in the literature of the American Civil War. Lee's Lieutenants: A Study in Command is the most colorful and popular of all...

Great Analytical Detail and Story Telling of Lee his Lts.

Published by Thriftbooks.com User , 17 years ago
Very well written book that is really three volumes that looks at Lee's command of his Army of Northern VA. from the perspective of his leadership and the relationship and performance of his key generals. There is newer information on many of the individuals in this classic such as Magruder, Longstreet, Gordon and Hill but Freeman does one of the best blow-by-blow accounts of the battles then anyone. When I first read the book I was very impressed with the detail even about the Battle of Williamsburg and I clearly recall Freeman's description of Jubal Early getting shot down when trying to take redoubts not knowing that Hancock had already arrived on his left. He provides a fascinating analysis of each key officer at the beginning of each volume. The only weakness is that Freeman was a huge admirer of Lee and he accepts Jubal Early's post war philosophy that Lee did not fail but was failed by others. Note that in each volume, the character description of Longstreet grows dark as Freeman starts to write about Gettysburg. Stonewall has less luster in the book as well but in spite of that, the volumes are quite fascinating.

Published by Thriftbooks.com User , 18 years ago
"Lee's Lieutenants" was for many years, the seminal work on the Civil War. This series of volumes almost single-handedly defined Civil War military history, and was a textbook in military academies throughout the world. In fact, it was so authoritative that it focused academic and popular attention on the Army of Northern Virginia and the Eastern Theater; almost denuding the Western and Trans-Mississippi theaters of any mention at all either in the classroom, or popular histories. Although originally published in the early '30's, it is still "required reading" for Civil War historians in the early 21st Century. The current edition in a single volume retains the power of the original series, but without the extraneous appendices and footnotes. The result is a scholarly history that moves quickly, and holds your attention.That being said, the book certainly reflects the agenda of its author, even with (or maybe because of) skillful editing. Growing with the propaganda of the "Lost Cause" permeating his home and surroundings, Mr. Freeman wanted to capture many of the storis of the ANV he heard as a youth, supported by original research. In areas, this desire almost turns the prose into a Confederate Iliad, with perfect physical specimens joyfully lusting for combat. Certainly no discussion of the higher rights and wrongs of the rebellion will be found here (unusual considering that R.E. Lee opposed both secession and slavery and would've made an interesting sidelight into his pysche). That caveat in mind, this is STILL required reading for anyone seriously interested in the ANV, or command as practiced by Civil War armies. Highly recommended.

Published by Thriftbooks.com User , 20 years ago
My uncle had read the three volume series of Mr. Freeman's work on Robert E. Lee's generals and wanted me to do the same. If I start something I like to finish it and I just didn't want to conquer the couple thousand pages in the three volumes so I opted for the one volume abridgement. It is well written, a classic of Civil War history, and gave great insight into the minds and actions of the Confederate military leadership. From reading the introduction this abridgement was made possible not by excising the main text, but by eliminating a majority of the voluminous notes and addendum material present in the three volume series. I don't know what I missed, but what remained was fascinating, extremely readable, and well recommended. At this point I would be very interested in acquiring and reading the three volume set.

Published by Thriftbooks.com User , 21 years ago
Lee's Lieutenants is the most in-depth, comprehensive study of the officers of the Army of Northern Virginia that I have ever read. Not only are the officers we here so much about, like Jackson, Longstreet, Stuart, D.H. and A.P. Hill adequately covered, but other brave and dependable officers like Early, Rodes, Pender, Ramseur, Hampton, Fitz Lee, Hood, Pelham, Alexander, Mahone and countless others including staff members of the major officers, are all given due credit and attention. One of my favorite officers of the confederate command was the young Georgian by the name of John B. Gordon. Gordan was one of those rare men who never had formal military training, but gained such a reputation on the field that as the war progressed, he became one of Lee's most trusted and able officers. The ANV had the advantage of good officers, but as the long, bloody war progressed, so many of these fine officers from the ranks of colonel to lieutenant general were killed. Freeman covers the situation in detail in the latter part of the book. The army fought its way to the very end. At this point it was an army of starving troops, few capable officers, and shattered divisions, brigades, and regiments. A detailed book that covers the officers, the battles, the strategies, and the devotion of the fighting men of the South. A must read for any student of the Civil War. I do agree with the reader who stated that the maps were not all that good.

Published by Thriftbooks.com User , 21 years ago
Freeman accomplishes something with Lee's Lieutenants at which many historians fail: he has written a work that not only instructs and engages the mind, but also transports the reader to the time and place of which he writes. There is nothing dry here. Although more technical (and maybe even a little more accurate) studies have been written on the Army of Northern Virginia, Freeman's rendering of Jackson's Valley campaign will remain the greatest ever put to paper. I also found Lee's Lieutenants to be a better work than R.E. Lee, for the simple fact that Freeman's hero worship is not quite so apparent in the former work.
Copyright © 2020 Thriftbooks.com Terms of Use | Privacy Policy | Do Not Sell My Personal Information | Accessibility Statement
ThriftBooks® and the ThriftBooks® logo are registered trademarks of Thrift Books Global, LLC