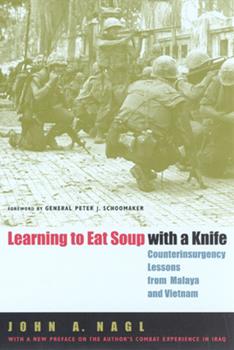 Learning to Eat Soup with a Knife: Counterinsurgency Lessons from Malaya and Vietnam

by John A. Nagl

Invariably, armies are accused of preparing to fight the previous war. In Learning to Eat Soup with a Knife , Lieutenant Colonel John A. Nagl--a veteran of both Operation Desert Storm and the current conflict in Iraq--considers the now-crucial question of how armies adapt to changing circumstances during the course of conflicts for which they are initially unprepared. Through the use of archival sources and interviews with participants in both engagements,...

A New Paradigm for Counterinsurgency Fighters

Published by Thriftbooks.com User , 16 years ago
Lt. Col. Nagl, a West Point graduate and Rhodes Scholar, provides a comparison of counterinsurgency experiences in Malaya (Britain) and Vietnam (U.S.). Gen. William Westmoreland, U.S. commander in Vietnam, when asked his solution to the Vietcong, replied with one word: ''firepower.'' As an example of more accurate thinking Nagl also quotes Marine Gen. Victor Krulak: ''You cannot win militarily. You have to win totally, or you are not winning at all.'' Conversely, the British in Malaya worked to limit damage to the populace's hearts and minds. Nagl's first conclusion is that creating widespread collateral damage while killing insurgents is not going to succeed - you have to select the right amount of power for the situation. It might take longer, but a positive outcome is more likely. Thus, the ideal killing weapon is a knife, the worst is an airplane, and the next worst is artillery. Nagl's second major conclusion is that organizational culture determines whether it succeeds - the British Army better was able to learn and change than the Americans in Vietnam. The book's title comes from Lawrence of Arabia (T.E. Lawrence) - the British officer who successfully united crudely-armed Arabs on camels to oppose the Turks - long before Vietnam, Malaya, or Iraq. "War upon rebellion is messy and slow, like eating soup with a knife," he wrote in his "Seven Pillars of Wisdom." I never saw the sense in burning villages in Vietnam, nor angering Iraqi's with midnight searches and unexplained arrests. Now, after reading Nagl's book, I realize there never was any. The "good news" is that Nagl's book is now receiving wide-spread readership among Army leaders - a copy was even recently given to Secretary Rumsfeld. Hopefully the Americans will learn better this time than in Vietnam.

A Painful Mirror Into Our Present Situation

Published by Thriftbooks.com User , 16 years ago
"Learning to Eat Soup with a Knife" is an essential read for anyone hoping to make sense out of America's current situation in Iraq. Extremely well-researched and accessible, LTC Nagl provides his readers with an accurate examination of America's historical weaknesses in fighting counterinsurgency warfare and lays out lessons for us to take to Iraq and beyond.

Published by Thriftbooks.com User , 16 years ago
How does an army learn to fight an effective counterinsurgency? Sound relevant to today's headlines? John Nagl asked this question before it was "cool" - before the pundits of CNN or MSNBC knew how to spell "counterinsurgency". This book - Learning to Eat Soup with a Knife - is his answer. John is a scholar and a soldier who combines academic prowess and firsthand experience in counterinsurgency. LTC John Nagl is a West Point graduate (and in the interests of disclosure, a classmate of the reviewer), an armor officer, a Rhodes Scholar, a former instructor of International Affairs at West Point, and a veteran of the insurgency in Iraq. The insurgency in Iraq had not begun when the hardcover edition of his book came out in 2002. Unfortunately, it's not at all certain that the people who opened the current war in Iraq read it. This 2nd edition includes a new author's preface discussing the relationship between his earlier scholarship and his recent combat experiences in Iraq. He candidly discusses what he now thinks of his own work based upon his first-hand experience with insurgency. The depth of LTC Nagl's research is evident in every chapter and should satisfy the rigor of academia while, at the same time, his writing style is clear, concise, and leaves little doubt as to his reasoning. To be successful in an age of insurgencies, Nagl concludes that the Army "will have to make the ability to learn to deal with messy, uncomfortable situations an integral part" of its organizational culture. It must, per T.E. Lawrence, be comfortable eating soup with a knife. Victory in a fluid insurgency requires the ability to learn and to adapt and may even require differing victory conditions, organizations, and core competencies depending upon the context. Nagl's own experiences have only hammered home the truth of this necessity. His unit was required to change its equipment, its organization, and develop new core competencies to transform from a tank battalion focused on a Soviet-style armored threat into a counterinsurgency (see "Professor Nagl's War" in the NY Times Sunday Magazine, Jan. 11, 2004). They integrated people and tools not normally found in a battalion task force in conventional battle (such as Civil Affairs and Counterintelligence teams - see "Soldier Uses Wits to Hunt Insurgents" by Greg Jaffe in the Wall Street Journal, Sep. 10, 2004). They hunted the enemy while at the same time acting as impromptu diplomats, aid workers, military and police trainers, and tribal mediators. This experience in Iraq was what Nagl describes as the most intense learning experience of his life. This book was worth it - without the new information - as a hardcover at $89.95. At $17 in paperback, "Learning to Eat Soup with a Knife" should be on the shelf of every American interested in the current situation in Iraq and in how the US can prevail.

Published by Thriftbooks.com User , 18 years ago
The next war and how to fight it are primary concerns today as the Army finds itself engaged in counterinsurgency operations in Iraq and Afghanistan while in the midst of its transformation to a more mobile force. Of utmost concern is how to combat the guerrilla forces in Iraq, well resourced insurgents that strike and then disappear into the population. Major John Nagl addresses the problems of fighting a guerrilla force with a conventional army in his book "Counterinsurgency Lessons From Malaya and Vietnam." In this study, Major Nagl looks at the British Army's experience in Malaya in the 1950's and the American experience in Vietnam. In both of these conflicts, Major Nagl provides an in-depth analysis of the military institutions and how they adapted to combat an unconventional enemy. The British Army of the 1950's was a conventional force fresh from the battlefields of World War II. In the early days of the conflict it was a force unsuited for the task of trying to subdue the Communist guerrillas of Malaya, wasting manpower in huge battalion sweeps of the jungle. Yet its organizational culture allowed it to evolve over time. A history of colonial policing and small unit actions along with a receptive command climate permitted the British Army to adapt to its environment and over time destroy the communist insurgents. The author contrasts this counterinsurgency success with the performance of the American Army in Vietnam. Solely concerned with the next big conventional war and misusing lessons from Korea, the Americans failed to adapt to their environment, preferring to use indiscriminate firepower as the solution and viewing the eventual North Vietnamese invasion rather than the Viet Cong forces within South Vietnam as the enemy. Refusing to learn from the lessons of the British and their own junior leaders in the field, the US Army failed to learn as an organization and eventually lost the conflict. Impeccably researched and well written, Major Nagl has chosen a subject critical to today's Army, namely how to defeat an insurgent enemy. He contends that in order to succeed in the future "savage wars of peace," the Army must be able to adapt as an organization and step away from the preoccupation with solely waging conventional warfare against other nation-states. Overall a great book and a must read.

Published by Thriftbooks.com User , 18 years ago
My own multiple interests in organizational redesign, learning and adaptation, and national security issues led me to read this book. MAJ Nagl is an armor officer, a Rhodes Scholar, and a former instructor of International Affairs at West Point. His book, Counterinsurgency Lessons from Malaysia and Vietnam: Learning to Eat Soup with a Knife, discusses the way armies learn within the frameworks of the British experience with counterinsurgency in Malaya and the American experience in Vietnam. It is particularly timely as the army finds itself in a global war against shadowy networks more reminiscent of insurgencies than conventional armies. These networks have turned the "rules" upside down. Networks that can change direction at will or that can go in different directions simultaneously are not easily defeated by bureaucratic juggernauts that require fifteen years to field a new weapon system or that still apply failed tactics from thirty years ago. Victory in multiple, rapidly changing environments requires the ability to learn and to adapt and may even require differing victory conditions, organizations, and core competencies depending upon the context. MAJ Nagl presents a twofold thesis. First, the British Army developed a successful counterinsurgency doctrine in Malaya due to its performance as a learning institution. Second, the American Army failed to do the same in Vietnam and in fact actively resisted the necessity of learning to fight a new sort of war. But what is organizational learning? Learning theorists tend to recognize the inherently iterative nature of the learning process whether they characterize it using a simple model such as Boyd's OODA loop or Ackoff's more complex organizational learning and adaptation model. To develop his thesis, the author first looks at Richard Downie's model of the learning cycle as applied to the development of doctrine [1]. This model is more complex than the OODA cycle and less complex than some other models. Overall, Downie's model provides a reasonable framework for this study. MAJ Nagl then evaluates each army's experience using a set of questions to measure the effectiveness of each as a learning institution. To answer these questions, the author provides a summary history of insurgency itself, a description of the historical context in which each army's organizational culture developed, and the details of the respective British and American experiences in Vietnam. He finally sums up his conclusions in a "lessons learned" chapter that provides recommendations to foster learning within the army. Largely due to its historical context, the British army developed an organizational culture characterized by a focus on limited war, diverse, global experience, a decentralized organization, and doctrinal flexibility. In contrast, American military history led to an organizational culture focused on absolute victory, large wars characterized by technology and overwhelming firepower,
Trustpilot
Copyright © 2022 Thriftbooks.com Terms of Use | Privacy Policy | Do Not Sell My Personal Information | Accessibility Statement
ThriftBooks® and the ThriftBooks® logo are registered trademarks of Thrift Books Global, LLC