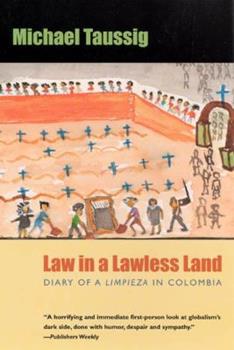 Law in a Lawless Land: Diary of a Limpieza in Colombia

A modern nation in a state of total disorder, Colombia is an international flashpoint--wracked by more than half a century of civil war, political conflict, and drug-trade related violence--despite a multibillion dollar American commitment that makes it the third-largest recipient of U.S. foreign aid. Law in a Lawless Land offers a rare and penetrating insight into the nature of Colombia's present peril. In a nuanced account of the human consequences...

Published by Thriftbooks.com User , 15 years ago
Michael Taussig offers a glimpse of the possibilities in his book Law in a Lawless Land: Diary of a Limpieza in Colombia--limpieza being the term the paramilitaries use to refer to "cleansing" a region of its undesirable elements. Taussig, an anthropologist at the other Columbia (the one on the Upper West Side of New York City) has been doing fieldwork since 1969 in a small city in the Cauca River Valley, a few miles from Cali. Some time around the year 2000, a tax-free, free-trade industrial zone was established just outside town. In February of the following year, a group of paramilitaries move in, hired--Taussig's informants tell him--by the "town's business elite." In the 1990s, in other regions of Colombia, the style of the paramilitaries would have been to move into a town such as Taussig's, identify the supposed guerrilla sympathizers and massacre them all at once, thereby creating headlines and embarrassing human rights inquiries. But in the new millennium the paramilitaries operate in a more discreet fashion, and their enemies are no longer so much political as they are economic. In Taussig's town, they move into El Cupido, a love hotel downtown, with computer lists helpfully provided by military intelligence and go about the work of cleansing the town of its delincuentes--"undesirables," a few at a time. Their victims include not so much leftists or even political activists but street people: kids who've had "problems with the law," beggars, a madwoman, prostitutes not affiliated with El Cupido and a young man who, drunk in the middle of town one evening, makes the mistake of yelling at the paras: Que salgan hijeputas--"get out of here, you sons of whores!" He's killed for his outburst and his body lies on the street all night because people are afraid to move it. In neighboring towns other paramilitaries ban long hair or earrings on men, miniskirts on women, baseball hats worn backward and a gay beauty contest. Life under the paramilitaries doesn't sound like a whole lot of fun. Taussig's book is based on a diary he kept during two weeks he spent in the town in May of 2001 during the fourth month of its paramilitary reign. His most interesting discovery is the support the paramilitaries have in town. One of his informants tells him that eight of ten of the townspeople are for them. There's a reason for this. Until the 1950s Taussig's part of the Cauca River Valley was dominated by small peasant farms. In their river-valley plots, the peasants (descendants of former African slaves) grew cacao trees, plantain trees, banana trees, coffee trees, orange trees, lemon trees, avocado trees, papaya trees, guava trees and many other trees besides. The peasants thereby created a mixed harvest that mimicked the tropical rain forest, required no store-bought fertilizers, no pesticides, little labor, little capital and, perhaps most important, created a continuous, year-round income. But, sometime in the 1950s, the sugar industry arrived. The pea

A book about Colombia's forgotten poor

Published by Thriftbooks.com User , 17 years ago
Michael Taussig is acclaimed in the New York Times as "one of the brightest and most original thinkers in anthropology." I would like to add that Taussig is also a profound student of philosophical anthropology, "the study of the nature and essence of humankind." To this end, "Law in a Lawless Land," is an enormous opening into the minds of Colombia's forgotten poor. This book is like no other written on Colombia. Taussig does not borrow from the research of legendary historical graybeards like Vernon Lee Fluharty, Richard E. Sharpless, Orlando Fals Borda or German Archiniegas. He does not use academic journals, newspapers or magazines to prove a point. Instead he presents a lyrical diary of his extensive fieldwork. In doing so, the author provides a raw and unnerving documentation of Colombia's long tradition of violence.Taussig's work is easy reading for students of Colombian - American affairs and Latin American specialists. However, this book will be a tough road for those unfamiliar with Colombia's culture of denial. For instance, Taussig condemns the government. His work is a glaring spotlight on the government's paramilitary utilization of "limpieza" or "social cleansing" of the bottom dwellers of Colombian society (desechables or throwaways). The author does not rely on Human Rights Watch, Amnesty International or even the U.S. State Department's repeated annual reports on the government's feeble human rights record. Taussig lives with the relatives and friends of victims and dumps eyewitness accounts on the reader instead.The author laments how a handful of wealthy families underhandedly bought and then destroyed an enormously fertile valley for thousands of families...in order to establish theCali sugar industry and institutionalize poverty for the same families as cane workers. He also reports how Colombia's Army & Police intelligence officials create "lists" of people that are handed to paramilitary leaders for execution. Union leaders, teachers, priests and other defenders of the poor often make the lists. Taussig does not defend the guerrillas...he knows they are not angels. This book is more about how the poor are caught in a violent sandwich with no hope in sight.This book discloses a simple fact of life in Colombia. That the ruthless paramilitary death squads are a part of the State strategy...particularly today. The leaders of the paramilitary death squads employ terror and this book is an honest chronicle of regular public assassinations in broad daylight. Yes, it is indeed tragic, that in Colombia the Army will stand aside and allow poor unarmed civilians to get cut to pieces because powerful members of society think this is how you protect democracy. Highly recommended. Bert Ruiz
Copyright © 2020 Thriftbooks.com Terms of Use | Privacy Policy | Do Not Sell My Personal Information | Accessibility Statement
ThriftBooks® and the ThriftBooks® logo are registered trademarks of Thrift Books Global, LLC