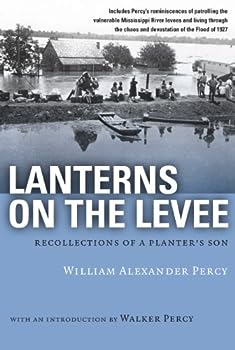 Lanterns on the Levee: Recollections of a Planter's Son (Library of Southern Civilization)

We receive 30 copies every 6 months.

Born and raised in Greenville, Mississippi, within the shelter of old traditions, aristocratic in the best sense, William Alexander Percy in his lifetime (1885--1942) was brought face to face with the... This description may be from another edition of this product.

Published by Thriftbooks.com User , 16 years ago
Percy's approach to life can be summed up by a quote from the book: "It is a very nice world-that is, if you remember that while morals are all-important between the Lord and His creatures, what counts between one creature and another is good manners." Percy's book is a rare member of that most elusive category of books - the autobiography of true literary quality. Percy's touch is honest without being journalistic; poetic without appearing over-embroidered; and in his own eccentric person he provides the subject matter which is required to make such a work interesting. He steps out of the late 19th/early 20th century Mississippi delta as a character that could not have existed anywhere else. Affected, genteel, kind, elitist, romantic and with a view of race more in keeping with British Imperial "white man's burden" line of thought than anything American in origin - Percy the character remains fascinating even as the modern reader disagrees with his positions. A clearly and well told tale of an extinct breed (the gentrified southern aristocrat), a lost land (the Mississippi delta of the turn of the 20th century), and a buried epoch (the pre desegregation era). An excellent book - well worth reading not only to better understand a particular aspect of American history but for the pleasure of reading a well written book, regardless of the subject matter.

Perceptions of a Southern Artistocrat

Published by Thriftbooks.com User , 18 years ago
It is true that this book attempts to explain the South, in both its physical and social aspects, from the point of view of the "landed gentry." However, a more accurate description of "Lanterns on the Levee" is that of an autobiography of William A. Percy, in which he reflects upon his life and the interesting times in which he lived. I found this book very inciteful into the mind of a southerner, and believe that Mr. Percy did a fine job of bringing his broad experiences with different cultures and social climates into this book, and using these to produce a cogent analysis of his homeland. Though not completely objective (and often bigoted by today's standards), I think that Mr. Percy did his best to "tell it as he saw it," and often admits his biases as a precursor to his analysis. The book is very poetic and philosophical in places, and includes both the subjective and emotional sentiments that one must understand in order to come to terms with "a southerner's love for the south." Additionally, I feel that Mr. Percy (especially in his last few chapters) provides the reader with thought-provoking and highly articulate observations about life, time, and human-nature. I think this book is excellent, and believe it to be a "must read" for anybody with an open-minded interest in the Missisippi Delta region, or the South in general.

The Life of a Soul Remembered

Published by Thriftbooks.com User , 20 years ago
Noble, refined, and distinctly tragic in sentiment, this book captures the proud soul of William Percy in eloquent prose. A man, in love with a vision of what is best in the world, in love with what is best in his fellow men, in love with what is best in his home emerges from these pages. He stands defiant in defense of the vision, despite all its imperfections, confident that its beauty outshines its faults. The book stands not only as a proud memorial to a noble vision that has passed into history, but a testimony to the beauty of the human spirit that continues to animate men to strive for nobility of life and the security virtues.

Published by Thriftbooks.com User , 20 years ago
This is about Southern life, but I think it goes beyond that. I think Percy tries to go beyond the sterotypes of the South that are so commonly held by those who do not live in the South so that the South can be better understood. In doing that, I think he speaks of those sterotypes in a way that makes me, at least, realize that much of our thinking (not just about the South), but especially about modern life, is clouded by sterotypes, too. It is as if we so easily accept stereotypes in so many aspects of our lives (and I think Percy felt the same way) that few of us really understand ourselves, how we think or how we live. Finally, he is an excellent writer and a great story teller. Taken altogether, I think it is a true gem of American literature. It is one of those books I truly love to discover. Bravo, William Alexander Percy!

Published by Thriftbooks.com User , 21 years ago
I needed an unabridged dictionary, and a dictionary of cultural literacy to get through this book. Well worth the trouble. Percy's command of the English language is unparalleled. After reading this book, you too will be envious of his education. If you like the book Rising Tide, about the Mississippi flood of 1927, then get this book. I have given this book to more friends than any other book.
Copyright © 2022 Thriftbooks.com Terms of Use | Privacy Policy | Do Not Sell My Personal Information | Accessibility Statement
ThriftBooks® and the ThriftBooks® logo are registered trademarks of Thrift Books Global, LLC