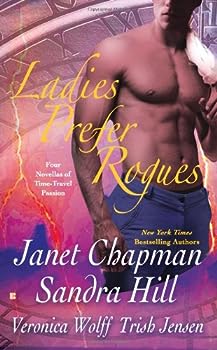 Four of today's most cherished romance novelists prove that when it comes to love, there's no time like the present--no matter what century you're in. In New York Times bestselling author Janet... This description may be from another edition of this product.

Published by Thriftbooks.com User , 11 years ago
Man from the Moon by Janet Chapman is about a group of warriors from the moon. Sounds hokey but when they meet up with a female veterinarian who is witty, bunny loving, and thoroughly likable the fun begins. I really liked this story. 5 stars Tomorrow is Another Day by Sandra Hill was good, but not my favorite. The characters were likable but at the end I wondered why the heroine needed to go back in time. 3 stars Drowning Sea by Veronica Wolff is my favorite. A tale of Scotland about a true and abiding love. A must read by a very talented author. You will love it! 5 stars Sixteen Decades by Trish Jensen is a fun read. A woman jumps forward from 1870 to 2010 and falls for the town sheriff. You'll like these characters. 4 stars

Published by Thriftbooks.com User , 11 years ago
Janet Chapman brings a great story full of fun, excitement, and love. This is a must read. Albeit a bit short but thats what it's supposed to be!

Published by Thriftbooks.com User , 11 years ago
Man from the Moon by Janet Chapman Isobel is a veterinarian in coastal Maine. As she is leaving a store Isobel finds herself kidnapped by four men. Daniel, the leader, has managed to get a tree limb embedded into his side. Time is of the essence and though Isobel is an animal doctor, they have no time to search for anyone else. Isobel is told that for the next five days she will be tending Daniel while the other three men continue with their mission. Daniel and the others are from the moon colony in the year 2243. They have five days to find a certain type of animal and save mankind. As Isobel tends Daniel, the futuristic warrior finds himself falling in love with her. ***** FIVE STARS! Filled with characters that I came to love quickly and lots of silly humor, this story kept me hooked from the first to the last. I especially love the ironic ending! ***** Tomorrow is Another Day by Sandra Hill Larry Wilson, Cage LeBlanc, and Sly Simms are three Navy SEALs. Cage and Sly registered Larry on the Extreme Dating web site, a New Orleans-based dating service owned by Margo Baptiste. Larry did not know what his buddies had done until the crazy women began showing up. Margo pulled Larry's photo and info off the site, but the women were still showing up. The trio goes to New Orleans to meet with Margo and brainstorm ideas on how to solve the problem. After the meeting, Margo enters the elevator of her office building and ends up crashing below when the elevator falters. She regains consciousness to find herself in the year 1870. She quickly meets Laurent Duvall, who looks identical to Larry. Margo ends up traveling with Laurent and his sister, Lettie, to their plantation, Rosylyn. Margo is about to help the people who are dependent on the plantation for their survival by doing what she does best - matchmaking. **** FOUR STARS! Sassy and filled with humor, mostly about the classic "Gone with the Wind", I found myself grinning several times as I witnessed Margo settle in to her new time period. The character of Lettie often stole the spot light! **** The Drowning Sea by Veronica Wolff Set in the year 1662. Iain MacNab sees his love, Cassie, die from a stab wound as her father is preparing to have him hanged. Iain escapes to the sea and becomes a cabin boy for a privateer. Twenty years pass. He is now known as Black John MacNab, a notorious pirate. John will finally get his chance to avenge Cassie. Then Lady Fate takes him by the hand ... *** THREE STARS! As I neared the end of this story I began thinking that perhaps it was not going to be a time travel romance after all. I soon learned differently. Do not be foolish, as I was, to believe this romantic tale has nothing to do with time travel. Enjoy the ride! *** Sixteen Decades by Trish Jensen Set in Little Fork, Nevada, 2010. Sheriff Ty Coltraine is with Fannie Mae, madam of the Rooster Ranch, investigating a missing client. While checking the backyard, Ty hears a lady plead

Published by Thriftbooks.com User , 11 years ago
Man from the Moon by Janet Chapman Is a charming story about Isobel a doctor of veterinary medicine and what happens when a bad of warriors from the future mistake her for an M.D. The men in this story have been sent back in time to save mankind from an event that will happen in the future and they are the only hope of success. While on this mission one of their party is injured and is in urgent need of medical attention. This leads to a case of misunderstandings on the part of the Moon Man sent for help and her arrives back with Isobel who is their only hope. As with all if Janet Chapman's heroines, Isobel is a strong accomplished and self sufficient female who has bad choice in men. But during her time with the Moon men she finds herself believing their story and in turn falling for her patient, she vows to do anything she can to help them on their mission and try to keep her heart in tact; will she succeed in helping the future of mankind and finding her one true love? Or will she have to make the ultimate sacrifice? I loved this story and it left me hoping that there will be more from the moon men at a future date. Tomorrow is Another Day by Sandra Hill Having never read anything by Sandra Hill before I was unsure what to expect but was excited at the prospect of a new to me author. Tomorrow is another day had echoes of Gone with the Wind to me and that was before the reference was made in the story. Marguerite Baptiste runs a highly successful internet dating service for the elite. Larry Wilson is a navy SEAL whose friends decided it would be fun to set a profile up on Marguerite's website and set him up with someone nice. Their plan backfire's slightly when Larry is being overrun with women who want him and he doesn't have any interest in. Despite Marguerite's best efforts with removing Larry from the site he is still being stalked. Between Larry's friends and Marguerite a plan is hatched to solve the problem, but before it can happen Marguerite finds herself thrown back in time to 1870 and things are very different all except for Laurent Duvall. Laurent looks suspiciously like Larry and Marguerite takes off after him and invites herself to his home and into his life. Pitying her Laurent agrees and allows her to come to his plantation. Marguerite slowly gains access to more than just his home and theirs is a relationship that blossoms through time. I really enjoyed this story and I felt that this was the one out of the whole anthology that had all the loose ends tied up at the end. Sandra Hill I think will be a new author for me to enjoy. Drowning sea by Veronica Wolff This was another new to me author and this story I think is my favourite. It had me crying in parts and I thought mid way through it was my least favourite of all. Scotsman Iain MacNab is a peat boy and has noticed from afar the beauty of the lairds daughter, but he doesn't know her name. While cutting the bog one day he hears a lady in distress and hurries to i
Copyright © 2022 Thriftbooks.com Terms of Use | Privacy Policy | Do Not Sell My Personal Information | Accessibility Statement
ThriftBooks® and the ThriftBooks® logo are registered trademarks of Thrift Books Global, LLC