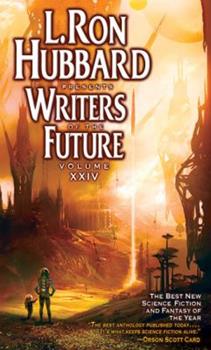 (Book #24 in the L. Ron Hubbard Presents Writers of the Future Series)

Enter 13 spectacular new worlds of imagination and the fantastic . Discover the new visionaries of imagination in the Writers of the Future.. Established in 1983 by L. Ron Hubbard expressly for the aspiring writer, Writers of the Future has become the most respected and significant forum for new talent in all aspects of speculative fiction. Never before published first-rate science fiction and fantasy stories selected by top names in the field. "Energetic,...

Innovative Collection by the Minimally Published!

Published by Thriftbooks.com User , 12 years ago
I don't write too many book reviews, especially anthologies, but I have been collecting these series of books since they first came out with Volume I way, way back in 1986 before some of these readers were born, sadly. L. Ron Hubbard was a noted writer of pulp fiction in the 1930s and 1940s before he embarked upon his establishment of Dianetics. Despite media reports to the contrary, his output of science fiction was minimal, being more heavily influenced by adventure stories (similar to Jack London's tales), crime drama, fantasy and mysteries and even the occasional western and romance tale. In the Eighties he created a contest for writers, which the publishers later expanded to illustrators. The winners get monetary prizes and some exposure. Some who have been published didn't really take advantage. Others such as Kevin J. Anderson went on to write Star Wars novels and adaptations. Anyway, Volume XXIV (24) is not the best set of new stories I've read, which is usually what I expect in an anthology of anyone. But the themes of being more than you are, of freedom and slavery, of relationships with higher authority pepper all these tales. I've read the majority of the book but will keep my comments to a few that I've read. "A Man in the Moon" by Dr. Philip Edward Kaldon is a longish tale of a guy who finds out that he is dying and yet wants to go to the moon to establish a colony that is nearly finished being built. The relationship with his friend the doctor is interesting but there is no real conflict except for the occasional political rhetoric. "Bitter Dreams" by Ian McHugh is an acquired taste. If you enjoy Australian writing, then this may be for you. Racism is confronted heavily in this story. "Taking a Mile" by J. Kathleen Cheney was interesting. Viviana is a "facsimile". Facsimiles are androids made with a limited lifespan of a week and then they die. The Corporation wants to keep it that way. The facsimiles want human rights. Like a Cylon story, in a way. "War Bird in the Belly of the Mouse" by David Parish-Whittaker was fun. Imagine two World War I pilots time-snatched from the past to help tourists fight fake war games in Sopwith Camels in the 21st Century. Sounds hokey but comes off nicely at the end. "Snakes and Ladders" by Paula R. Stiles was a creepy tale about a future war where nanobots invade and kill life. In our hero's body are 'good' nanobots that achieve intelligence and start worshiping him as a god. Finally, my last favorite was "The Bird Reader's Granddaughter" by Kim A. Gillett, a girl who learns how to foretell the future, using seagulls rather than tea leaves and why it might be best to leave the future as it is! As usual there are writing and illustration articles to help the novice. "Circulate" by L. Ron Hubbard was written back in the 1940s and talks about how the novelist gets ideas for his stories and uses many examples from Jack London. "The Four C's to Success" by Cliff Nielsen, gives g

Published by Thriftbooks.com User , 12 years ago
Once more the Writers of the Future contest delivers a great anthology with many interesting and very well written stories. I enjoyed this collection a lot and only one or two stories missed the rhythm (impressive for a long collection like this). Would recommend.

Published by Thriftbooks.com User , 12 years ago
I was very happy when I received Writers of the future. The product was just as it was described, used in good condition. Actually it was in perfect condition including still having the product ordering inserts that I needed. I recommend this seller highly.

The American Idol of Sci-Fi

Published by Thriftbooks.com User , 12 years ago
It takes aspiring writers a great deal of skill and persistence to get past the four judges (all of whom are notable authors) and it shows in the high quality of the stories. An engaging read from the first to the last. My personal favorite was newcomer, Al Bogden's, The Girl who Whispered Beauty, which is set in a future where everything is different, except the harshness of human nature. It is hard not to tip your hat to Ian McHugh for showing off his mad skills in Bitter Dreams, a twist on Zombies that will leave you paying more attention to your own shadow than you did before. J.D.Everyhope is every bit as talented as she is beautiful, which is saying something and she does not disappoint in Circuit, a story about a conscious reference books passage through time into an ever wiser, ever narrower future. A harrowing experience when you are filled with all the broad minded and controversial works of all the greats. I could go on but rest assured there is not a bad one among them. Well worth the price of a fast food meal, and better for you.

Published by Thriftbooks.com User , 12 years ago
Looking for a way in to publishing your fiction/fantasy writing? L. Ron Hubbard presents Volume XXIV. Thirteen of the best tales from the Writers of the Future international writers' program with essays on writing and illustration by L. Ron Hubbard, Rebecca Moesta and Cliff Nielsen. Read these delightful tales the will spark your imagination and take you into unbelievable worlds. After reading these colorful tales, enter into the contest and you could become one of the writers of the future in the next volume. Recommended for fiction/fantasy enthusiasts.
Copyright © 2020 Thriftbooks.com Terms of Use | Privacy Policy | Do Not Sell My Personal Information | Accessibility Statement
ThriftBooks® and the ThriftBooks® logo are registered trademarks of Thrift Books Global, LLC