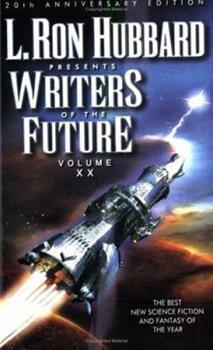 Writers of the Future

(Book #20 in the L. Ron Hubbard Presents Writers of the Future Series)

This description may be from another edition of this product. This historic 20th anniversary edition of the L. Ron Hubbard Presents Writers of the Future anthology, the bestselling and most widely influential anthology of its kind, brings you 15 exciting,...

Visions of wonder, danger, and adventure

Published by Thriftbooks.com User , 16 years ago
"L. Ron Hubbard Presents Writers of the Future, Volume XX," edited by Algis Budrys, collects 15 tales from the Writers of the Future contest for 2003. The collection is illustrated by winners of the Illustrators of the Future International Illustration Program. Interspersed among the stories are essays on writing, art, and science fiction by L. Ron Hubbard, Robert A. Heinlein, Robert Silverberg, Vincent di Fate, and Kevin J. Anderson. The stories fall into the genres of science fiction and fantasy. The selections that impressed me the most are as follows. "Monkey See, Monkey Deduce," by Jonathan Laden: a powerful story about an experiment in scientifically enhanced intelligence. This story gripped me from its great opening line: "He screamed from all his mouths, then covered all his ears." "Bottomless," by Luc Reid: follows a hero in his travels through a world that exists along the edges of a seemingly bottomless pit, lit by a "Sun Thread" suspended in the center of the pit and running its length. It's a richly imagined world, with compellingly rendered geography and culture. "In Memory," by Eric James Stone: about a brilliant mathematician whose consciousness is duplicated and projected into a supercomputer. This is a powerful, disturbing story that deals with memory, time, and family ties. Other standouts: "The Weapons of the Lord Are Not Carnal," by Andrew Tisbert: follows a cyborg whose spiritual quest takes him to a friary on Mars. "SunRunners," by Matthew Champine: an exciting adventure that imagines Earth's moon as a sort of wild west frontier. "Last Days of the Mahdi," by Tom Pendergrass: Set in Egypt, this suspense tale involves genetically engineered spies. It's a vividly written story that draws on Islamic culture and prophecy. Among the essays, I particularly enjoyed Kevin J. Anderson's "False Summits," which uses mountain climbing as a metaphor for a writing career. Overall, I found this to be a fine anthology. The collection as a whole features truly compelling themes and characters and takes the reader to some truly fantastic places. I especially recommend this collection to those who love science fiction.

Published by Thriftbooks.com User , 17 years ago
Writers Of The Future: Volume XX is the 20th anniversary edition of the L. Ron Hubbard presents Writers of the Future anthology. Featuring 15 amazing, original stories showcasing rising creative talent in speculative fiction, all winners of the Writers of the Future contest, Writers Of The Future: Volume XX is an anthology that transcends imagination and transports the reader into the most mind-blowing and exciting new worlds. All the pieces within have never before been published, and the professional judges who screen the submissions include such well-known story weavers as Orson Scott Card, Larry Niven, Anne McCaffrey, Andre Norton, Frederik Phol, and much more. Award-winning black-and-white illustrations, also judged for their expertise, enhance the mass-market edition of this world-spanning and immensely entertaining collection.

Weapons of the Lord are not Carnal

Published by Thriftbooks.com User , 17 years ago
Hope we hear more from Andrew Tisbert in the future. Real ingenuity, great writer.

Great read - a strong collection of stories by new writers

Published by Thriftbooks.com User , 17 years ago
Enjoyed all of the stories in this collection - there were no duds. Most were engrossing, well written, and had novel ideas as any good sci-fi story should. Primarily, they were good reads. My disclaimer, I am married to one of the writers (the last story), so I may be somewhat biased in my judgment Monkey See, Monkey Deduce - Starts with a bang and is a great first story in the series. Fun, charming, and packed with action (like E.T.). Presents the world through the eyes of a young, male, monkey very well. I especially liked the passage where a woman scientist introduces herself. "His noses sniffed... His Alpha nose picked up the sure sign of estrus. He puffed out his chests to impress her... 'Hi, Caps.' She bared her teeth, but he did not feel threatened." Bottomless - An engrossing story about a simple goat herding boy who happens to live in a world that appears to be a bottomless pit. The boy is in for multiples shocks of a lifetime when he falls... A very well told yarn with strong character development and smooth transitions. Flotsam - An extremely well told story about an alien race that resembles an amphibian. Their leader is enslaved to humans out of his feelings of moral obligation. This is a very sensuous story. I can feel his keen longing for the water under my fingernails as he sits marooned on a human ship resenting his bondage. Kinship - Although well written, was not one of my favorites. Extended scenes where Alexander is jacked into the net and approaches a bright light source (as in Nuromancer, Snow Crash) seems to have been overdone. Also did not agree with the seeming moral of the story, that physical existence was more important than cerebral existence. In Memory - Presents an interesting world where a person can scan-in his entire brain along with his personality and memory into a computer. A geek who has uploaded himself is presented with an interesting problem when he discovers his memory bank is faulty... but then the story seems to end abruptly just as it was getting good. Please, I am waiting for a little bit more! The Key - still reading this one. Reminds me of Talisman. Cancilleri's Law - about a young man entranced by a woman frozen in time. This also seemed too short. The story behind the woman that will explain her reaction and her fate when she is brought into the future may need more development. Sleep Sweetly, Junie Carter - a feminine story about the wife of an officer, who suffers through long waits (or sleeps) during her husband's trips. There are catty scenes and fashion screams. But my favorite part was Junie's junkie like addiction to the sleep chamber. I almost think that the exquisitely physical longing described might be modeled after the writer's real-life experience with a drug stronger than pot -- but I think it's just being a good writer. Conversation with a Mechanical Horse - really enjoyed this story. Reminds me of Princess Bride. The Weapons of the Lord Are Not Carna

Best new sicence fiction of the year!! A must read!!!

Published by Thriftbooks.com User , 17 years ago
Fabulous stories by new sci-fi authors including Gabriel Koch's terrific time travel thriller Cancilleri's Law. You should enjoy every story in this book if you enjoy sci-fi/fantasy!
Copyright © 2020 Thriftbooks.com Terms of Use | Privacy Policy | Do Not Sell My Personal Information | Accessibility Statement
ThriftBooks® and the ThriftBooks® logo are registered trademarks of Thrift Books Global, LLC