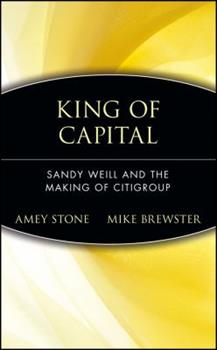 King of Capital: Sandy Weill and the Making of Citigroup

by Mike Brewster and Amey Stone

A fascinating story of a legendary dealmaker who masterminded an unprecedented merger Citigroup CEO Sandy Weill orchestrated many deals over his legendary forty-five year career--none bigger than the 1998 epic merger of Travelers and Citibank to create the international conglomerate, Citigroup. King of Capital tells the compelling story of how this complex man revolutionized the banking world and transformed Citigroup through a combination of mergers...

A Talent for Deals and Recognizing Value.....

Published by Thriftbooks.com User , 18 years ago
I've just started reading this book and it is most certainly a good buy. The businesswoman in me loves Weill's ability to recognize value where others fail to see it (don't all the great ones have this unique characteristic?); the future wife in me admires his dedication, love and adoration of his spouse, a true confidante and partner in every sense of the word. I really enjoy reading about powerful men who are not afraid of telling the world how much of an intellectual and mental impact their wives are. More later....

Published by Thriftbooks.com User , 19 years ago
This book captures the very essence of the famous (and infamous)king of Wall Street..Sandy Weill. From his humble beginnings to his staggering success in the world of business and finance, this book leaves no stone unturned in detailing fascinating facts and trivia on both his personal and professional life.This is a must read for any Sandy Weill fan, businessmen and businesswomen alike, or simply a CEO star in the making.Fascinating...once you pick this book up, you won't be able to put it down!

Published by Thriftbooks.com User , 20 years ago
"King of Capital" is a must read for every investor who wants to learn more about how to be "Wall Street Smart," and how to chose effectively and honestly managed companies. Sandy Weill's clear vision, while not always apparent to those who work with him, becomes very apparent to the readers of this intriguing, reader friendly, and well-researched book by Stone and Brewster. Sandy is smart, competitive, and clean. How he became "King of Captial" should inspire future corporate leaders as they embark on their journeys which will be under closer scrutiny than ever before. However, even if you are not an investor or future CEO, this timely book is packed full of so much information about the deal makers of past few decades, that it makes for thoroughly enjoyable reading for those who desire just to be informed.

Published by Thriftbooks.com User , 20 years ago
King of Capital is a refreshing departure from the countless biographies that are written for no other purpose than to profit from exposing the personal frailties of the rich and famous. Instead, authors Stone and Brewster provide an inspiring account of how Weill worked his way up from a stock runner on Wall Street to the CEO of Citigroup. The picture of Weill that emerges dispels the notion that he is merely another "Barbarian at the Gate'' who rose to the top by acquiring other companies. Unlike the Wall Street celebrities of the 1980s whose quest for personal gain caused them to look no further than the price of a company's stock, Weill forged his path to success by mastering the mundane details of his brokerage firm's back office operations. The book describes how Weill used this knowledge to acquire and successfully turn around a series of increasingly larger financial institutions that fell into disrepair. Weill's life story also tracks the evolution of the financial services industry and the demise of the Depression-Era banking laws, which prohibited banks from engaging in the securities business. Interestingly, King of Capital notes that Weill had considered as early as 1968 the concept of a financial holding company that sold an array of financial service products. The fact that Weill would go on to orchestrate a merger between Travelers and Citibank 32 years later is a testament to his vision. This book is a must read for any serious observer of the financial services industry.

Published by Thriftbooks.com User , 20 years ago
Didn't Sandy buy Nikko Securities? And make it successful, as opposed to Merrill's flop with Yamaichi? I think so, and this episode is omitted from this book.But forgive Stone and Brewster this one error because their book is excellent. It is a simple, straightforward, easily-read history of an extraordinary man's accomplishments.I've watched Sandy through the eyes of the WSJ's reporters over the many years he's been building his legacy and I can quote a few individual soundbites like the one about Nikko, but the whole panorama of Sandy's career only came into focus with this book. A great man, Sandy is, and he makes me proud to be part of the same industry; and I hope in small ways I can imitate him.The authors are obviously fans of Sandy's, which may make them somewhat biased, but so am I.
Trustpilot
Copyright © 2022 Thriftbooks.com Terms of Use | Privacy Policy | Do Not Sell or Share My Personal Information | Accessibility Statement
ThriftBooks® and the ThriftBooks® logo are registered trademarks of Thrift Books Global, LLC