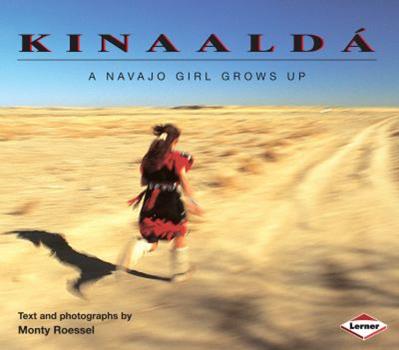 Kinaald?: A Navajo Girl Grows Up

An insider's view into the world of the contemporary Navajo people, this is a story about a tribal family that keeps alive a traditional coming-of-age ceremony.

Published by Thriftbooks.com User , 14 years ago
Cultures celebrate children's coming-of-age in many different ways, but one of the nicest (at least for girls) is the Navajo Kinaalda ceremony, celebrating the girl's maturing into womanhood. In this real-life story, readers watch as Celinda McKelvey, at age 13, celebrates her maturity over several days at the family's traditional Hogan, used mostly for ceremonies. In a Navajo blanket dress and buckskin moccasins, specially made for her celebration, and decorated with turquoise and silver necklaces, Celinda grinds corn for a cake large enough to feed the entire family, and she is "molded" into the woman she is becoming, after which she runs into the sun---first at daybreak (since for Navajos, all things begin in the east) and sunset---a way of asking for long life and good health. The book also explains the resurgence of Navajo tradition after long decades during which the U.S. government forcibly removed Navajo children from the reservation and tried to teach them Western culture, language and job skills. Learning Western culture and English are of course critically important for success, but not at the expense of children's family lives and destruction of centuries' of tradition. Growing up is difficult, particularly for girls reaching puberty. The Kinaalda is a beautiful native American way to celebrate the hopes and successes along with the future opportunities too often expressed by fear.

Published by Thriftbooks.com User , 20 years ago
It is a topic that many use slang and euphemisms to describe,or avoid talking about at all. Mother's pass along factual books and try to bravely discuss it with their daughters, who approach it with mixed feelings. "It" has been called many things in American culture, but in Navajo culture, it is celebrated at a Kinaalda.A young woman's Kinaalda is celebrated around the time of her first menstrual cycle. She celebrates the time when she is being shaped into a woman in a ceremony that lasts two to four days. Photographer and writer, Monty Roessel, allows us to be privledged viewers of 13 year old Celinda McKelvey's Kinaalda. During the ceremony, Celinda wears a traditional blanket dress, takes on the adult role of grinding corn to make a huge corn cake, is literally molded into a woman by the hands of others, and runs a race for blessings of health and longevity. It is a trial of endurance, as growing up often is. This book presents a view of menstruation that can be difficult to convey to the newly initiated and to those who are still waiting. This book tells us that it is a time to celebrate. It is a time to acknowledge becoming a woman. Celinda is both honored and validated in her new status. She finds support and positive attention during her Kinaalda. Even though many young women outside of the Navajo culture may not want a ceremony for their special time, this book is an asset to own. It is a wonderful way to see this experience across cultural beliefs.
Trustpilot
Copyright © 2022 Thriftbooks.com Terms of Use | Privacy Policy | Do Not Sell or Share My Personal Information | Accessibility Statement
ThriftBooks® and the ThriftBooks® logo are registered trademarks of Thrift Books Global, LLC