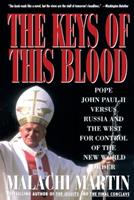 Keys of This Blood: Pope John Paul II Versus Russia and the West for Control of the New World Order

Only Malachi Martin, consummate Vatican insider and intelligence expert, could reveal the untold story behind the Vatican's role in today's winner-take-all race against time to establish, maintain, and control the first one-world government. * Will America lead the way to the new world order? * Is Pope John Paul II winning the battle for faith? * Is the breakup of the Soviet empire masking Gorbachev's worldwide agenda? The Keys of This Blood is a...

Published by Thriftbooks.com User , 16 years ago
This book is a masterful analysis of modern geopolitics. It is different from other books on the subject in that it adds a vertical or spiritual ingredient to the often horizontal only analysis of history. This allows the author to delve deeper into the meaning and consequences of world politics as they exist today. It also provides plausible explanations to modern world events. Malachi Martin rightly contends that unless one takes into account the fact that there is a spiritual warfare going on at the same time, modern history and geopolitics make no sense. The book seeks to look at history through the eyes of John Paul II, a pope and a master in geopolitics. John Paul II, Martin contends, was a man singularly prepared for his time through life experience, nationality, culture and education, much like St. Paul was the best man to christianize the world through his combination of Jewishness, Roman citizenship and Greek education. John Paul II was aware of his role and place, and once Martin explains the centrality of the history of Poland and the identity this provides to John Paul II, his fixation with geopolitics as his battle field for man's soul becomes a lot clearer and many a question is answered regarging John Paul II's papacy. In the book, Martin identifies the two main players vying for world domination in the spiritual sphere today and thus lays the ground for his historical analysis: materialism with the East and West in their communism and capitalism, which Martin places on one side together -- and the Catholic Church, the only truly geopolitical spiritual organization in existence today. One of the two sides must win, for they cannot coexist. Either materialism coopts or conquers the Church or the Church ends materialism and Christianizes man again. Martin treats his subject always with this Christian spiritual dimension and point of view in mind, therefore you will read modern history through the eyes of the papacy as it stood with John Paul II, taking into account the message of Fatima, the role of Poland in Christianity and several other often neglected aspects of history that cleary show the "hand of Providence" and how God is truly the Lord of History. The book is a great resource for students of Church history, modern events and the Catholic Church. It is also a great resource for those non Christian or non believers seeking to understand John Paul II better and why the Catholic Church reacts(ed) as it does(did) in modern times. Martin has a masterful section on the silenced history of Poland, its central role in Christian history, how it was the first republic and example to Europe and a wonderful analysis of the Messages of Fatima and what they may mean in today's world. Malachi Martin was a gifted author (died in 1999), priest (ex-Jesuit), Vatican insider and exorcist. He claimed, and substantiated his claims in his writings, to know the inside story. Much of what he wrote about has come true (for example, Martin

John Paul II is the "Servant of the Grand Design"

Published by Thriftbooks.com User , 21 years ago
Malachi Martin's work is a veritable "tour de force." With authority (he was one of the world's foremost Vatican Scholars), skill and erudtion he meticulously traces the geopolitical ambitions of Rome from beginning, i.e. Christ's alleged comments to Peter that upon him the church would be built, to end where the Vatican winds up in charge of the One World Government. Martin posits that anyone who was under the age of 70 at the time this book was written would be alive to see the day when the nation-state, as we know it, would cease to exist. What will be most surprising to most readers is how intimately involved the Papacy is in world politics, all for the purpose of establishing the Catholic Church as the One World Government. (See Revelation 13, 17).Whether or not Pope John Paul II turns out to be the eventual ruler of the One World Order is irrelevant. Dr. Martin's book goes into exhaustive detail how this Pope, more than any of his predecessors in this century, has worked feverishly to keep the Vatican on the world stage as a major player. Karol Woytila has had a clear-eyed view of what the church's role should be in world affairs dating back to the time when he was a priest during the Second World War working undercover for the US Government. He learned well at the feet of the master in this regard; Stephen Cardinal Wysinzski took the young cleric under his wing during the formative years of his priesthood, and the account of his tutelage of Woytila is spellbinding.Readers will be fascinated to learn just how much the Vatican was behind the fall of Communism in Eastern Europe, and just how closely the US and Vatican work on foreign policy issues.This book could very well be subtitled "Prophecy Made Clear by Modern Events." John Paul II is the "Servant of the Grand Design;" papal hegemonist ambitions are in plain view. A blockbuster!!....

Ecxellent, as usual, from Fr. Martin

Published by Thriftbooks.com User , 21 years ago
I thought that this was excellent and fast-moving, despite it's intimidating size and subject matter. Fr. Martin writes succinctly and beautifully, his research and knowledge of the subject are obvious. I always obtain many insights from his writing, and this is no different. Wonderful insights into the geopolitical plans of all the various international power brokers. A striking part for me was the succinct history of Poland, from the time that they were just tribes, to the civilizing of Eastern Europe, their 3 pacts with God and the Church, and the history of Cardinal Wyzinski and Cardinal Wojtyla, and the role they played in the history of that great Catholic country. Fr. Martin helped me to understand a little bit where Pope John Paul is coming from, although the events have progressed 6 years beyond the scope of the story. I also sensed Fr. Martin's great love for Pope John Paul II. I have loved every book I've read by Fr. Martin. May God rest his soul.

Published by Thriftbooks.com User , 21 years ago
Malachi Martin was a prolific excorcist and an advisor to two popes. He knows what he is talking about. Without this book, you'll have a hard time ever getting this kind of insider's knowledge about the evils of the impending global government (official in May 2001) and the Vatican. Unfortunately, this book is out in the middle of a heated debate between those who champion Vatican II (Novus Ordo Mass) and those who don't. Both sides claim to be completely right. Niether will consider their own flaws, or look at the good points in the other. It's an old war in the Church, and both sides are missing out on some great points. Both sides are very bigoted toward each other. In the middle of it all, is Father Malachi Martin, just trying to tell it like it is. Both Masses are technically valid, WHEN they are executed and followed carefully, and Father Martin says that, but the real problem facing us is the new global government. Watch out for some very strange changes in 2001. For those who want to know what to expect, this book will give you some great clues. Basically, we'll be enslaved by communism. The Humanist Manefesto of the U.N. is the same as the Communist Manefesto. In this book, Father Martin explains how the Fatima prophecy was right after all.

Published by Thriftbooks.com User , 24 years ago
The Keys of this Blood is not only profound scholarship, but galvanizing drama as well. Martin's fluid prose is addictve as he superbly chronicles the geo-political poker game between the Vatican, Russia, and the West. In addition, this is a far more superior study of Pope John Paul II than Carl Bernstein's and Marco Politi's recent His Holiness (1996, Doubleday). Consistent with his oeuvre, Martin is critical of Vatican II policies and how they feverishly feed into socialism. With his brilliant examination of Antonio Gramsci and his unheralded yet highly influential brand of clandestine Marxism, one really must wonder if Communism is as crippled as the media has let on. Martin indicts many as he exposes some of the shocking Faustian alliances the Church has made over the years. Moreover, Martin is truly convincing in his assertion that the Church has been infiltrated by full-fledged Marxists, a point that he examines in his highly controversial 1987 best-seller The Jesuits. This is a must-read for all pious Catholics who worry about the Church's survival.
Copyright © 2020 Thriftbooks.com Terms of Use | Privacy Policy | Do Not Sell My Personal Information | Accessibility Statement
ThriftBooks® and the ThriftBooks® logo are registered trademarks of Thrift Books Global, LLC