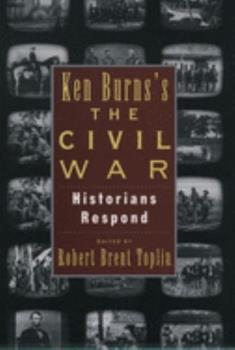 Ken Burns's documentary The Civil War made television history, breaking all viewing records for a PBS series. Indeed, forty million people saw it, more than the populations of the Union and the Confederacy combined. Newsweek praised it as "a stunning television documentary." For a generation of Americans, this documentary is the Civil War. Yet many professional historians criticized it sharply for ignoring the roles of minorities, pointing to a lack...

an interesting look at the series

Published by Thriftbooks.com User , 17 years ago
this book is an interesting critique of the great Civil war series. I think the best essay was that done by Ken Burns himself. This book gives a fair and balanced look at the series through the eyes of different minded historians

Lots o' laffs at the critics of Burns masterpiece

Published by Thriftbooks.com User , 18 years ago
This book is a riot. I have always thought Ken Burns' Civil War miniseries was a one of the best 12 hours of TV ever shown. The series recently aired again for the first time in a few years and it's just as good as I remembered, possibly even better. Granted, it's not perfect and one could probably nitpick it forever, but few TV shows have ever equaled it for sheer emotional impact. This book is not about nitpicking. It is about politically correct professors ripping it to shreads, and is it ever funny. In general, they whine about how the series devotes too much time talking about battles between dead white males, instead of the really important stuff, such as slavery, women's issues, class struggles, and the like. One (I think it was Eric Foner) has a bone up his kiester over the fact that the miniseries devotes almost nothing to Reconstruction (his speciality, by the way) and instead shows photos and movies of Confederate and Union veterans at a reunion picnic at Gettysburg. Another complains about the use of the term Rebel. Somebody whined about the fact that Shelby Foote, the white Southern popular writer got more airtime than Barbera Fields, the black female professor. And so on. If you want to know why liberal professors get so little attention outside their own circles and why, on the other hand, non-specialist Civil War history is so popular, you have to read this book. It's worth it for the laughs alone.

Okay Book of the PBS Series

Published by Thriftbooks.com User , 22 years ago
This book was fairly good in how it compiled complaints lodged by historians against the PBS series, "The Civil War". However, one critic (Leon Litwack) was extremely off base in his condemnation of Burns and Shelby Foote. Because they didn't think soldiers of the USCT were supermen, Litwack can't stand them. Litwack needs to plow through the accounts of battles in which the USCT participated. These soldiers could stand up to battle like white troops, but they weren't any better. Litwack is just in the thralls of PC-mania and refuses to acknowledge fact. Overall, though, the book is worth reading if one ignores the ignorance of certain critics.

Published by Thriftbooks.com User , 22 years ago
This book is composed of historians' critiques on the PBS series, "The Civil War", the most widely watched PBS series. Most of the historians make good points in showing areas that Burns left out of the series but all of them need to recognize the fact that it wasn't possible for Burns to show everything they wanted. No series could do that. Moving on to individual historians, most are very fair with Burns but two were not in parts of their arguments. These two need to be taken to task. Firstly, Catherine Clinton attacked Burns for not showing enough females in his series. She then spends a large amount of space discussing women who disguised themselves as men in order to fight. I hate to rain on Clinton's parade (well, not really) but it is estimated that only a few hundred women both North and South did that. Compared to the males in the armies (something like 1.5 million), that is EXTREMELY tiny portion. Burns spent a lot of time with the males because the made up the VAST majority of soldiers, both USA and CSA. Period. Clinton is on firmer ground when she berates Burns for not giving more time to women on the home front who kept the war supplies moving. In reality, these women were really the precurser of Rosie the Riveter. Secondly, Leon Litwack attacks Burns for not concentrating on the legacy (at least, the legacy Litwack says) of the Civil War. Granted, the civil rights struggles could be mentioned. However, Burns should not be damned for going the "reunion" route with his documentary. Reunion is what happened between North and South and that should NOT be forgotten, especially since both sides were killing each other just a few years earlier. On another topic (and one of the faults I found with "The Civil War") Litwack keeps maintaining that the war was fought over slavery. That is simply not the case. The Northern states WERE NOT threatening slavery where it existed. Abe Lincoln wasn't threatening slavery where it existed. The Republican party platform of 1860 didn't threaten slavery where it existed. Abolitionists in the North were threatening slavery but they were a VERY small group and were thought of as kooks by fellow Northerners. Any sampling of these materials and the letters of Northern soldiers will reveal that they were not fighting for emancipation. They were for emancipation only if it helped destroy the South. Thus, the South's "peculiar institution" wasn't threatened. If the argument is made that the South's leaders felt that slavery was threatened, why didn't the Southern states go back into the Union when the Congress made enticements of legal protection of slavery? Economic factors (tariffs especially) was a larger part of the South's secession than slavery. It is curious, though, that Litwack's litmus test of a just cause, the American colonies shouldn't have been granted independence because they had slavery. America shouldn't have come out as wel

Other viewpoints given expression concerning the Civil War

Published by Thriftbooks.com User , 23 years ago
Although Ken Burns' PBS series, "The Civil War," won wide acclaim from viewers and critics and was PBS best-watched show, many historians disagreed in differing degrees to Ken Burns' approach to portraying the Civil War. Thus Robert Brent Toplin solicited and gathered responses from several historians, some who agree with Burns' methodology and some who disagree. What emerges is a portrait not only of a war that divided our nation over slavery in the 1860's, but a war that continues to divide us as we seek to define and explain that war. Of interest was the editor's thesis that each age looks at the Civil War through it's experiences and times: WWI era saw the Civil War as a silly regional conflict, much as they viewed WWI; WWII era saw the Civil War as a battle between good and evil and the start of civil rights. Today, we view war as a waste in the aftermath of Vietnam and that is reflected in our contemporary views of the 1860's conflict. That viewpoint is seen in Burns' epic.
Copyright © 2020 Thriftbooks.com Terms of Use | Privacy Policy | Do Not Sell My Personal Information | Accessibility Statement
ThriftBooks® and the ThriftBooks® logo are registered trademarks of Thrift Books Global, LLC