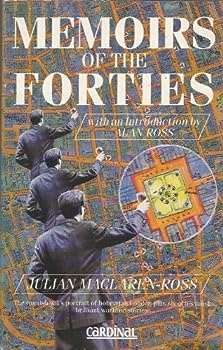 Memoirs of the Forties

Julian Maclaren-Ross was one of the most colourful inhabitants and chroniclers of the Soho and Fitzrovia of the forties, fifties and sixties. He knew and wrote about its most memorable characters... This description may be from another edition of this product.

Published by Thriftbooks.com User , 11 years ago
This is mostly about a group of characters, including Dylan Thomas, who drank around the Soho district of London. It was a time of privation and actually they couldn't afford to drink all that much because both food and alcohol were in short supply. A positive aspect was that those were days when periodicals like the London Magazine could not only survive but pay their contributors enough to keep them in drinks and enable them to live in central London. Maclaren-Ross is as famous for being written about as for writing, and some of his best writing is about other writers. As well as the actual memoirs, this contains six of his short stories to give an idea of where his standing is. They are moderately good. He is best-known now as the original for the character of X Trapnell in "The Valley of Dry Bones" in Anthony Powell's "Dance to the Music of Time" and it's interesting to compare his accounts of life in the British army during World War II with Powell's.
Copyright © 2022 Thriftbooks.com Terms of Use | Privacy Policy | Do Not Sell My Personal Information | Accessibility Statement
ThriftBooks® and the ThriftBooks® logo are registered trademarks of Thrift Books Global, LLC