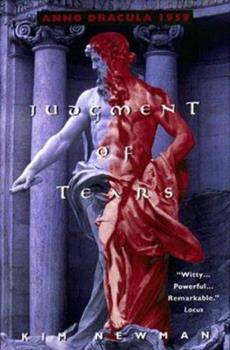 (Book #3 in the Anno Dracula Series)

It is a new era of lascivious excess and the unending pursuit of pleasure. The year is 1959, and La Dolce Vita cannot hold a candle to La Dolce Morte. The jet setters, the intelligentsia, the artists and luminaries, the powerful and the merely curious from all over the world are descending upon "the Eternal City." The paparazzi have gathered en masse to chronicle the raucous wake of a remarkable decade -- and to shoot the beautiful ones who have arrived...

Newman's considerable talents are on full display in this clever novel

Published by Thriftbooks.com User , 15 years ago
In ANNO DRACULA, Kim Newman posited a world where Count Dracula triumphs over Abraham Van Helsing, marries Queen Victoria, and becomes England's Prince Consort. Newman followed this triumph with THE BLOODY RED BARON, chronicling the events of the First World War as it took place in this alternative history. JUDGMENT OF TEARS, the third novel in this consistently inventive series, takes place in post World War Two Europe, circa 1959. In Rome to cover Dracula's royal wedding to undead Moldavian Princess Asa Vajda, journalist Kate Reed, a vampire herself, witnesses the brutal public slayings of two elder (long-"lived") vampires by the flamboyant Crimson Executioner. These killings, it seems, are only the latest in a series of murders--all the authorities can be sure of is that someone has declared open season on vampire elders. Her journalist's instincts aroused, Kate investigates, and is drawn into a web of intrigue involving, among others, Dracula, undead British secret service agent Hamish Bond, and Italy's own Mater Lachrymarum (The Mother of Tears), a mythic figure who may be the force behind The Executioner's bloody exploits. As in previous works, Newman rewrites history, providing readers with an addictive mix of the familiar and the new, skillfully manipulating a huge cast of fictional (such as Iowan Clark Kent, and Drs. Pretorious and Herbert West) and historical (like Orson Welles and Anita Ekberg) characters. A la Tom Wolfe, Newman renders the political, social and cultural scene with great panache, providing generous helpings of action and humor along the way. The book can be read as an entertainment, or taken as a challenge, to see how many references readers note--Newman helpfully appends a key of sorts to the novel, so readers can gauge how well they do. Either way, the novel is consistently entertaining. You finish this book almost out of breath with the nonstop quality of the action, and with a new appreciation for Newman's considerable talents.

Blood Gelato? You Gotta Love It!

Published by Thriftbooks.com User , 21 years ago
Newman's third book in the ANNO DRACULA series is arefreshingly light look at post-WWII Italy in his alternate universewhere Dracula (after having ruled England as Queen Victoria's PrinceConsort from 1885-88, then acted as Kaiser Wilhelm's chief militarystrategist during WWI) has retired in semi-exile to a large castlejust outside of Rome. Having recently announced his engagement to thevampiress Princess Asa Vajda of Moldavia, vampire elders aredescending upon Rome. This has upset the natural order of things, andvampire elders are being slaughtered by a mortal known as the CrimsonExecutioner. Also in Rome are the dying Charles Beauregard and hislover, 500+ year-old vampire Genevieve Dieudonne. Charles is beingquestioned by England's top spy, a vampire with a license to kill,about Dracula's possible motives for this wedding. Things soon take anasty turn, and vampire journalist Kate is soon in the thick of thehunt for the Crimson Executioner, too. The story takes great delightin lifting elements from Felini, Italian giallo horror movies, andeven THE EXORCIST! A great, fun read, not terribly scary but stillquite exciting as a vampire story where the bloodsuckers are bothheroes and villains. Can't wait for Newman's next, JOHNNY ALUCARD.

Published by Thriftbooks.com User , 21 years ago
Ciao Bella! Ye Gods! Newman is a fiendishly clever polymathic (sic?) confabulatory yarn spinner. Do ya like Alternate History? Do Ya like Vampires? Do Ya like Fellini, Il Maestro? If the answer is yes or even 'well maybe' to any of the above questions, then check out Newman's Anno Dracula stuff. Prior installments not neccassary, but recommended. Never have Vespa Scooters, sunglasses and blood drinking been so amusing, sexy, fun and witty. If you love playing 'spot the reference', you'll have a ball (Clark from Kansas and Gomez Addams, anyone?) Also features an exteneded cameo, nay a supporting role even, by a character stand in for the late great MARCELLO MASTROIANI, for my money to coolest thespian even to commit his immortal soul to celluliod, although I'm not sure I've spelled his name correctly (!). Also, Velvet Undergrounf fans are in for a small treat too...

Published by Thriftbooks.com User , 22 years ago
As an avid fan of Kim Newman I was thrilled to see this book come out. I never fail to recommend Kim Newman's books to everyone I meet, especially Anno Dracula, which I have read and re-read joyfully. I read Judgment of Tears and was not surpised to find that, as with all of Newman's works, I couldn't put it down. This is an excellent read and I recommend it highly!
Copyright © 2020 Thriftbooks.com Terms of Use | Privacy Policy | Do Not Sell My Personal Information | Accessibility Statement
ThriftBooks® and the ThriftBooks® logo are registered trademarks of Thrift Books Global, LLC