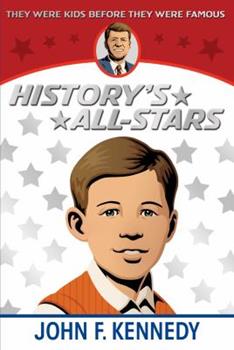 (Part of the Childhood of Famous Americans Series)

From Navy war hero to President of the United States, John F. Kennedy was an influential all-star in American history whose childhood is the focus of this narrative biography. Born and raised in Massachusetts, John F. Kennedy, nicknamed "Jack" was the second oldest of nine siblings. Despite a preference for fun over schoolwork, he graduated from Harvard, joined in the Navy, and went on to earn recognition for "extremely heroic conduct." He later served...

Published by Thriftbooks.com User , 19 years ago
John F. Kenndy was Americas Youngest President. John had 8 brothers and sisters. When John was in his teens, he loved to play all kinds of sports. For example, he played football, but did not make the team. In one game of football, John hurt his back very bad and had to have many surgeries. Later in life, John became very interested in politics and wanted to be a part of whatever might happen to America, so, he finally joined the Navy. On a boat with 4 other crew members and huge cruiser split the boat in half and it quickly sank. John saved 2 lives and received an award for their rescue. This book has many interesting stories about JFK's life. If you like reading books about Famous Americans, I recommend this book.
Trustpilot
Copyright © 2022 Thriftbooks.com Terms of Use | Privacy Policy | Do Not Sell My Personal Information | Accessibility Statement
ThriftBooks® and the ThriftBooks® logo are registered trademarks of Thrift Books Global, LLC