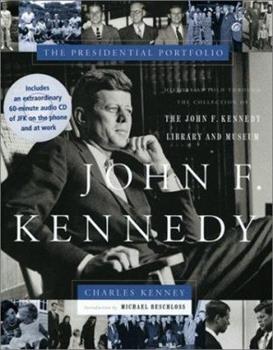 PublicAffairs is proud to introduce the first volume in our new Presidential Library Series, edited by renowned presidential historian Michael Beschloss. Each year, thousands of people visit the John F. Kennedy Library and Museum to experience the "thousand days" of his presidency and learn what it took to be the leader of the most powerful nation on earth. Now readers can revisit the tenure of one of America's most mythic figures and most controversial...

Published by Thriftbooks.com User , 18 years ago
there are over 250 pictures ans documents, it's very complete. the texts are interessing, not boring.there is a cd also.we can hear a few dialogues,. there is one with rfk and on the 14 tracks we can hear young caroline.there is part to rfk and jbk too.so I enjoyed it.

Published by Thriftbooks.com User , 19 years ago
John F. Kennedy: The Presidential Portfolio features more than 250 photos and documents from the John F. Kennedy Presidential Library and Museum that capture the essence, style, and excitement of the Kennedy presidency. Included in these pages are the artifacts from a lifetime young Jack's letter requsting to be made Godfather to his brother Teddy, a handwritten fragment of the inaugural adress, correspondence from Nikita Khrushchev, Martin Luther King, Jr., Jacqueline Bouvier Kennedy, Robert F. Kennedy and many others. Providing the backdrop for these images is a carefully rendered narrative highlighting the many remarkable events of Kennedy's life and his presidency: the tremendous physical ailments JFK had to overcome on a daily basis, his privileged chilhhood, transformation from reluctant student to Pulitzer Prize - winning author, dramatic political campaigns, struggle over the Cuban missile crisis, and his efforts to end segregation as well as counter nuclear proliferation, are all recounted here.To Enhance The Experience of reliving the Kennedy years, a riveting 60 - minute audio CD of JFK'S phone conversations and personal dictations is packaged with the book. The following is a list of the recordings.- An undated memoir entry concerning JFK'S entrance into politics.- A dicated letter (circa 1959) to Joseph P. Kennedy on election and poll results.- A dictated letter (circa 1959) to Jacqueline Kennedy on weekend in Rhode Island. - Phone Conversation with Sargent Shriver recorded on April 2, 1963 regarding keeping CIA out of the Peace Corps. - Three phone conversations with Ross Barnett recorded on September 30, 1962, regarding the University of Mississippi crisis.- Phone conversation with Richard J. Daley recorded on October 28, 1963 regarding the civil rights bill. - Phone conversation with Charles Halleck recorded on October 29, 1963 regarding the civil rights bill.- An undated phone conversation between JFK and RFK concerning articles in Newsweek and Time magazines.-Phone conversation with Dwight D. Eisenhower on October 22, 1962 regarding Cuban missile crisis. - Phone conversation with Dwight D. Eisenhower on October 28,1962 regarding Cuban missile crisis.-Phone conversation with Lincoln White on October 26,1962 regarding comments to the press concerning Cuban missile crisis.- A dictated memoir entry dated November 1963.

Pleasant but not outstanding

Published by Thriftbooks.com User , 20 years ago
As a twenty-something, I really don't know much about John or Robert Kennedy other than the vague "Camelot" fantasies tossed around. I acquired this book as part of my recent appetite for understanding JFK/RFK.I found it to be a light-weight overview of the major periods of JFK's life, along with some information on RFK and Jackie. While it revealed a few new things I hadn't heard before, this book is really of interest primarily as a coffee table book for ocassional perusal, and not for study. It's a great combination of stories you will have heard and pictures you have already seen.The accompanying CD, however, is particularly interesting in what it reveals about JFK the man and his way of being. Overall, I enjoyed it.

The Most Complete & Accurate on JFK

Published by Thriftbooks.com User , 20 years ago
This book is the most complete and accurate book on President John F. Kennedy. With the contribution from the John F. Kennedy Library & Museum, the true and exact data regarding the man who changed the life of many Americans is shown here in a direct manner. Great pictures. In conclusion, this book deserves to be at each home in the USA and abroad. JFK is worth to be known and admired through this masterpiece. This book is a must.
Copyright © 2020 Thriftbooks.com Terms of Use | Privacy Policy | Do Not Sell My Personal Information | Accessibility Statement
ThriftBooks® and the ThriftBooks® logo are registered trademarks of Thrift Books Global, LLC