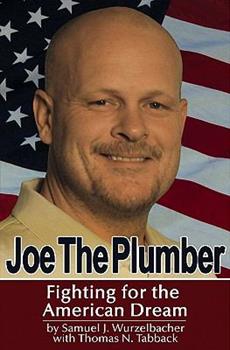 Joe the Plumber: Fighting for the American Dream

Joe exemplifies how one person speaking up can really make a difference. He is truly a great American. Sean Hannity, Fox News Hannity s America , Syndicated Talk Radio Joe's story is the iconic... This description may be from another edition of this product.

Excellent reading! Joe hits the nail right on the point.

Published by Thriftbooks.com User , 13 years ago
By far the best book out since the Wassup guys self titled bio. SamJoe tells it like it is, except for the written parts. I've read some really bad books, but this one was the best!

The Hasselhoff of Literature

Published by Thriftbooks.com User , 13 years ago
I don't know how express to you the glorious joy of this book except to say that Samuel "The Joe" Wurlitzerbonker is to literature what David Hasselhoff is to music [...]. After reading the other glowing reviews here, I just knew that I had to get a copy for myself. I was not disappointed. This book literally changed my life. Knowing his audience well, The Joe starts off with a simple and straightforward chapter titled "Achieving the dream without skills, talent or brains." This chapter alone, with is striking subtlety, carefully honed insight, and superb mastery of the English language should be enough to transport even the starving masses of Somalia into a state of sheer bliss. But The Joe doesn't stop there. He builds slowly, revealing in gentle steps the sublime world of his own self discovery so eloquently expressed in the chapter "Admit you know nothing but say it in front of the camera." By this time, those of you yearning for climactic release will be rewarded with the magnificent crescendo to be found in the chapter "Palling around with Palin." I don't want to diminish your pleasure by giving away any details so let's just say that, being a plumber, The Joe knows a thing or two about laying pipe. Make no mistake though, Sam isn't spent. He goes on and on for several more pages spraying pearls of wisdom in every direction. So don't just buy this book and leave it on your nightstand for dreamy bedtime pleasure. Read it daily to remind yourself of what might have been, and what you need to do to insure a successful future for yourself and your loved ones.Looking For-Best of David Hasselhoff

Published by Thriftbooks.com User , 13 years ago
SPOILER ALERT!!! In Joe's own words: "My story? Okay. It was never easy for me. I was born a poor black child. I remember the days, sittin' on the porch with my family, singin' and dancin' down in Mississippi." And from there Joe's story gets even more inspiring!! Joe also talks about somebody named Samuel, who is maybe like an imaginary friend. Next to that hot cougar Sarah Peelin, or whatever her name is, Joe is the perfect conservative Repuglican. He proves that an average American is just as smart as somebody who goes to Harvard or Oxford or University of Moscow like Barrak H Obama.

Published by Thriftbooks.com User , 13 years ago
RINO spinmeisters, aided and abetted by the liberal media, have promoted Joe the Plumber as being an everyman, the archetypical "average American." This book shatters that image. Joe the Plumber is not the "average American." He's the "average conservative," and I thank God for that. Last year, the "average American" elected an Harvard educated constitutional law professor to the presidency. Average conservatives knew better. They rallied behind Joe the Plumber and Sarah Palin, people like ourselves; people I proudly call "mediocre Americans." And that's why Joe is still so immensely popular. He's angry, vicious, ignorant, and intellectually incurious. He's one of us, and like us, he didn't learn about public policy and international relations at a university or from books or journals; he learned everything he needed to know by tuning into Rush, Hannity, Savage, and Ingraham. This is a great book, one every true conservative should buy, and more importantly, read. Yes, I know that sounds like a tall order, but it's an easy read. Joe uses one and two syllable words (many of them, written forms of various grunts) almost exclusively. If I have one complaint, it's that the publisher, Pearlgate, printed it in ink rather than crayon like the original manuscript. Other than that, I think it truly is the perfect book for the average conservative.

Published by Thriftbooks.com User , 13 years ago
I was startled and deeply impressed by the honesty and forthrightness with which Mr. Wurzelbacher dealt with his personal, human foibles: his failure to pay taxes, his dependence on welfare, the breakup of his marriage, and why he lied to Barack Obama about his income and his intention to buy a business. What a brave, selfless man. Hahahahaha, just kidding! Not-Joe the not-a-Plumber is the perfect symbol of today's Republican party -- attention-starved, intellectually bankrupt, pathologically dishonest, blatantly hypocritical, inexplicably proud of his ignorance and bigotry, and utterly unconcerned with the well-being of his fellow Americans and the welfare of his country. I predict this book will become a camp classic.
Trustpilot
Copyright © 2022 Thriftbooks.com Terms of Use | Privacy Policy | Do Not Sell My Personal Information | Accessibility Statement
ThriftBooks® and the ThriftBooks® logo are registered trademarks of Thrift Books Global, LLC