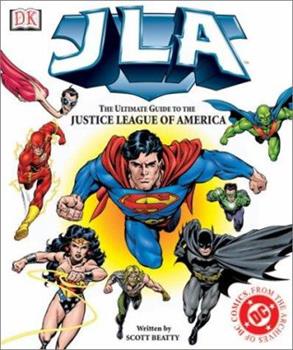 JLA:The Ultimate Guide to the Justice League of America

For the last 40 years, DC Comics' Justice League of America has united the most powerful superheroes -- Superman, Batman, Wonder Woman, The Flash, Aquaman, and Green Lantern -- against some of the most diabolical villains in comic book history. The Ultimate Visual Guide tells the history of the Justice League of America; their epic battles against awesome adversaries such as The White Martians, The Key, and Megaddon; and includes specially commissioned,...

Published by Thriftbooks.com User , 12 years ago
I was somewhat worried about getting my nephew a book versus a toy for Christmas, but he loved this book. I flipped through it and the content was fine for a nine years old versus some other comic books that I had looked at.

An incredible guide for the Grant Morrison JLA

Published by Thriftbooks.com User , 18 years ago
This guide follows the rest of the Ultimate Guide/Visual Dictionary series of books by DK, with the emphasis on the current JLA envisioned by Grant Morrison.Full of pictures, and "popup video" style tidbits about the characters, it is a quick, easy to absorb gallery of characters used in the JLA comic book series by DC.What it lacks is the comprehensive info for the Justice League of America and its other incarnations, but then again, it was listed as JLA: the Ultimate Guide. Because of that it's great for what it's worth. The timeline does make a nice attempt to mention all of its past incarnations.One thing... it keeps mentioning Triumph, but it didn't really show who this traitorous character is or looks like.

Published by Thriftbooks.com User , 18 years ago
One of the better superhero guides put out recently, this presents a highly entertaining overview of the League. Wisely, it opts to forgo a mind-numbing encyclopediac recitation of every hero who somehow stumbled into the JLA, and instead focuses on the most recent series. For purists, there is a fairly complete (if brief) history of the JLA's previous incarnations, and a detailed timeline that acknowledges both the actual comics and the multiple revisions that DC has made to the JLA's history over the years. Even longtime fans of the JLA should find new information, or at least a convenient (and attractively designed) handbook giving a helpful history of the JLA. Though there are one or two characters that get short shrift (Zatanna and Captain Atom, for example), this book remains one of the more informative and entertaining "ultimate guides". Recommended.

Published by Thriftbooks.com User , 19 years ago
The latest in DK's series in looking at DC's superheroes and by Mr. Beatty. The first two being last year's Batman and this year's Superman. The work that goes into these books is phenomenol, and the effort really shows. It'a a fun read, and full of facts from the forty some years of Justice League history. The maps on the JLA watchtower and various sites are incredible, and the imagination of those who work those sites out are astonishing. One thing that is a challenge to Mr. Beatty is DC's "revisionism" of its own history. So the good author has to try to keep current with the what's going on now, and sort of put the discontinued history on the back burner. Which is sort of a shame, because the pre-Crisis Universe had some good stories and characters that we haven't got the time to focus one. The last six pages which gives the run down on ALL the Justice League history is the best part for me, because it goes despite the revisionism. For me the ORIGINAl Justice League will always be Superman, Batman, Wonder Woman, Flash, Green Lantern, Aquaman, and the Martian Manhunter. Not the revised Black Canary filling in for Wonder Woman.It's little things like this which makes it harder for authors such as Mr. Beatty to work on doing "histories" as opposed to the Marvel Group which hasn't done such rewritings. I still would have like some photos from the Justice League Incarnations from the various television shows and such. This is knitpicking on my part. It's a good read, and a good run down on the group. Hopefully Mr. Beatty can continue on in the series, and do a few more.

Published by Thriftbooks.com User , 19 years ago
I bought this book and I think it's pretty cool. I like Superman & Batman. I think if you like Superheroes then you should defintily by this book. It ROCKS!!!! NUff Said.
Copyright © 2020 Thriftbooks.com Terms of Use | Privacy Policy | Do Not Sell My Personal Information | Accessibility Statement
ThriftBooks® and the ThriftBooks® logo are registered trademarks of Thrift Books Global, LLC