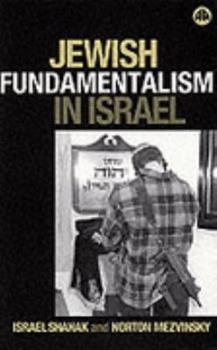 by Norton Mezvinsky and Israel Shahak

Published by Thriftbooks.com User , 19 years ago
"We realize that by criticizing Jewish fundamentalism we are criticizing a part of the past that we love. We wish that members of every human grouping would criticize their own past, even before criticizing others. This, we further believe, would lead to a better understanding between human groups and would be followed, perhaps, slowly and hesitantly, by better treatment of minorities." -authors.Far from being anti-Semitic, a label being thrown around carelessly these days which is most unfortunate. Shahak (himself a Jew) takes pains to separate fundamentalists from secular and traditional Jews. He further differentiates between groups under the fundamentalist influence. This book gives the reader a rare look of what happens in rabbinical circles and what is printed in Hebrew press that the rest of the world doesn't get to see. I wish MEMRI would be more altruistic and translate some of the Hebrew press. The major threat is that these groups pose a threat to Israel's democracy, and are major deterents to peace in the region. Without a doubt, Palestinian Muslim fundamentalists are equally to blame, however this book focuses (as the title indicates) solely on Jewish fundamentalism. A very eye-opening book and a bit frightening for lovers of peace and democracy. The complexity of Jewish society and culture is absolutely incredible. This book was clearly written for academics, NOT anti-Semites looking for "ammunition" with which to spew their hatred. I only wish there was a book written by Muslims that was as open and honest in their criticism of Islamic fundamentalists as this book is of Jewish fundamentalists. One certainly learns that broad generalizations of culture groups is wrong and non-representive. Shahak details the history and development of events leading up to Rabin's assasination, the massacre committed by Baruch Goldstein, and more. The book also details the rise of the Haredim in Israel and how political influence is won and lost in the Knesset. When an orthodox Jewish friend of mine told me how cruel Jews can be to other Jews, I had no idea how serious he was until I read this book. It is saddening to read. An excellent book recommended to those who are reading to learn of another perspective, not for those looking to increase their anti-Semitic hate. The information in this book could easily be taken out of context; the beauty of this book is that it provides everything IN context so that the reader understands the severity of the problem of fundamentalism without drawing the incorrect conclusion that Jews are somehow racist. Truly an incredible read.

Published by Thriftbooks.com User , 20 years ago
Fascinating insights into the groups which are generally over-simplified into the "ultra-Orthodox" (itself a serious misnomer, since "Orthodoxy" isn't the issue at all). The authors explain the differences between the various fundamentalist factions and sub-factions (Haredim, Shas, NRP, Kookists, Gush Emunim, etc., etc... and the black vs. knit skullcaps), who often put more energy into battling each other and other Jews than they do against the Palestinians. Perhaps the most interesting aspect of the book is that it draws almost entirely on Israeli sources in Hebrew, rather than the self-censoring and often apologetic English-language press which attempts to put as good a light on things as possible, largely for the benefit of the diaspora. I was unaware, for example, of the extent of open rejoicing among fundamentalists (and many other Israelis) over the Patriarch's Cave massacre and the murder of Rabin; and the role of "magic amulets" in election campaigns. Alas, the book does not make one optimistic about the prospects for reaching peace through rational discussion.

Published by Thriftbooks.com User , 21 years ago
Add Kevin MacDonald's CULTURE OF CRITIQUE [1998] to Israel Shahak's ["IS" ]latest work, result = a genuine binary intellectual weapon. Such items can be hot to handle. Opening at random my copy of "JFII", I find a reference to an execution in the Spanish city of Alicena nearly a millennium ago "dictated by the need to explain to all Jews that the duty of killing a Jewish informer is more important than other religious considerations...Maimonides said that the obligation to kill both informers and heretics is a tradition that is applied in all cities of the west." [p.140] As Gore Vidal has rightly suggested, IS qualifies through his three recent titles as a sage roughly on par with the prophet Isaiah. Since the clique which IS so learnedly describes has managed to achieve a decisive degree of influence over the Gore-Clinton regime, the American reader will find the remarks herein striking home to quite an intimate degree. IMHO the single most important sentence in JFII = "since the inception of Israel the secret slogan of Israeli politicians was 'we shall conquer first the security apparatus and then the Knesset and government." [p.93] The phrase "security apparatus" can be better translated into plain, old-fashioned English as "the secret police". Students of recent politics will want to review the Oklahoma City bombing, that moment of salvation for Mr.Clinton & the C.I.A, in the light of JFII. I would describe the author as the insider's insider who, to the great benefit of the species at large, has opened the door at the top of his tower in order to get an essential breath of the fresh air of truth, that vitally inflamatory oxygen of the human spirit. So how long will the Sulzbergers' New York TIMES take to get around to reviewing Shahak?

Published by Thriftbooks.com User , 21 years ago
Shahak explains in vivid detail various strains of Jewish fundamentalism and their political ambitions. Having come from a religious background, he describes accurately the mindset which the ultra-orthodox have and their motivations.

Published by Thriftbooks.com User , 21 years ago
I enjoyed this book. There is a tremendous amount of detail on the different Jewish fundamentalist political groups, the major one being Shas. Certain areas of the book interested me more than others. I felt the points on religiosity and fundamentalism were interesting. Another major point of my interest was the work on Baruch Goldstein. Shahak and Mezvinsky did an excellent job in substantiating that Baruch Goldstein was part of a larger Jewish fundamentalist movement that is accepted by Israel rather than a single crazy man.
Copyright © 2020 Thriftbooks.com Terms of Use | Privacy Policy | Do Not Sell My Personal Information | Accessibility Statement
ThriftBooks® and the ThriftBooks® logo are registered trademarks of Thrift Books Global, LLC