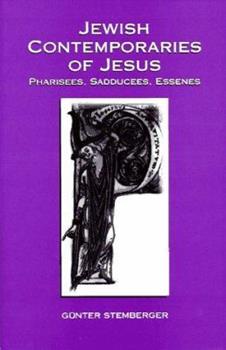 This description may be from another edition of this product. This book looks carefully at the sources of information for the three most prominent religious groups of first-century Judaism. Mahnke presents a close reexamination of the sources, history and...

Is That All There Is??

Published by Thriftbooks.com User , 15 years ago
To the reviewer who felt short changed by this book, we all feel the same way. However, if a careful analysis of the remaining evidence leads to a less than complete view of the past than we might wish, so be it. I think the author has done what he can with the sources. If you wish to know more about the sects of Judaism during the Second Temple period, you will need to look somewhere outside the texts as Stemberger exhausts them. There may be many things we can know about the past, however, somethings we will never be able to reconstruct. Of interest is the fact that Stemberger excludes the Zealots from his consideration of the Jewish contemporaries of Jesus. This is consistent with current scholarly thought on the time in question and the available evidence. Stemberger gives us a reasonable and reasoned assessment of what we can know from the texts. Conservative, judicious, and always erudite this is scholarship at its best. This book is a great cautionary into reading things into texts that are simply not there. Furthermore, if the author of this book has "a dog in the fight" that we call modern biblical scholarship, I can not find it. So, at least in some circumstances, it is still possible to write reasonably objective history where Jesus of Nazareth is concerned. Within its limits, this book is the state of the art on the topic it covers. If Second Temple Judiasm and the formation of Christianity are on your lists of concerns, I recommend this book most highly.

Good Assessment of Subject and Sources

Published by Thriftbooks.com User , 17 years ago
Stemberger begins his book with a description of the primary sources for the contemporaries of Jesus. These are Flavius Josephus, the New Testament, and Rabbinic statements. The next section of his book compares the theology of the groups. Then comes the histories of the groups. Stemberger concludes with the question of whether rabbinicism is a direct descendent of Phariseeism. Stemberger has written a good assessment of his topic. One might wish that he had included some other group, but it probably was not a Jewish contemporary of Jesus. His fair treatment of his subject and his sources may be seen in his final chapter where he says that rabbinicism was a compromise.

Published by Thriftbooks.com User , 18 years ago
This is an excellent, restrained and well-balanced study of the three most prominent Jewish religious groups around Jesus' time. The author successfully integrates all the available sources, including: the New Testament, rabbinical sources, Yosef Ben Mattathias, a.k.a. Josephus Flavius, Dead Sea scrolls and apocrypha. This is a daunting task because their perspectives and agendas are incongruent. Throughout, he maintains lucidity and caution in judging how useful they are for the purpose of delineating who's who and what's what in Jewish society in the first century A.D. Usually, he cautions, these sources are not very helpful. The gaping holes in our knowledge tempt the creativity of the researcher to fill them up with his intuitions. For example, a basic assumption of writers in this field is that the New Testament Pharisees represent the same group as the rabbinical "Prushim." I am not even convinced that this identification is correct. Stemberger does not address this issue explicitly. He has his theories, but he exercises academic discipline and points out the limits of our knowledge. I felt the book added a lot to my grasp of the contentious nature of the New Testament and of the rabbinical sources, as well as Ben Mattathias' disregard for consistency.Stemberger was in his element in his comparison of the shifts in the portrait of the Pharisees in the New Testament, particularly his emphasis on Luke's surprising description of the Pharisees. According to Luke, Jesus' relationship to the Pharisees could not have been as bad as they are portrayed in the other Gospels. "In the banquet scenes, Luke emphasizes the closeness of the Pharisees to Jesus, and in Acts he clarifies the points of association between the Pharisees and the Christian community." This is one of the few areas where the author indulges in some connecting of the dots. It is worth quoting him at length. "If it were possible, using various arguments, to doubt that Paul had been a Pharisee at first, it would still be difficult to question the role of the Pharisees among the first Christians. What reason might Luke have had for such a position, if corresponding tendencies did not exist? This might shed some light on the anti-Pharisee polemic in the Gospel tradition, especially in Matthew and John. Is this not at least partially an intra-Christian polemic in the process of the community freeing itself from the roots of the law? It is not contradictory that we find the polemic especially sharp in the Gospels to which we credit a Jewish-Christian background. It was there that the problem of differentiation was greatest!" One can stretch this insight to understand the anti-Jewish tenor of parts of the Gospels, which is grounded in early church politics. Parts of the Gospels seem to have a clear agenda to distance Jesus from his Jewish milieu. This is done without much subtlety. This tension determined editing decisions the authors of the Gospels made with their source material. Thei
Copyright © 2020 Thriftbooks.com Terms of Use | Privacy Policy | Do Not Sell My Personal Information | Accessibility Statement
ThriftBooks® and the ThriftBooks® logo are registered trademarks of Thrift Books Global, LLC