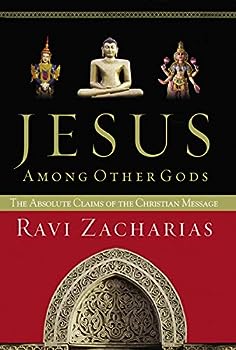 Jesus Among Other Gods: The Absolute Claims of the Christian Message

In a world with so many religions, why Jesus?We are living in a time when you can believe anything, as long as you do not claim it to be true. In the name of "tolerance," our postmodern culture... This description may be from another edition of this product.

Please evaluate this book in context!

Published by Thriftbooks.com User , 17 years ago
I've read many previous reviews that object to the fact that this is "not a true comparative study" or that it is "not objective and biased". Please remember that the title is "Jesus Among Other Gods" not "A bunch of Other Gods"--it was Ravi's intention to place Jesus as the centerpoint of the conversation, and this fact was even disclosed in the opening chapter. There are many great books out there that are created to objectively contrast the world religions, but this is not one of those books. I would especially recommend this book to an analytical Christian who may have been brought up as a Christian and who is searching for answers to the question "Why do I believe what I believe?". In America, this is a widely prolific problem, from my perspective. Again, if this book is read and evaluated in its proper context, it is a wonderful work that will offer insight after insight.

A must read for every Christian Parent and Teen

Published by Thriftbooks.com User , 22 years ago
This book is superb. It provides a biblically based response for the most common attacks made upon Christians and Christianity today. It is scripturally sound and a wonderful tool to assist in preparing a college bound Christian teen for what lies ahead in academia. I couldn't put it down. I will be handing out several copies of this book as gifts to parents and teens.

Published by Thriftbooks.com User , 22 years ago
This book is a wonderful antidote for our modern epidemic notion that all religions are the same. Zacharias compares how major world religions answer six major philosophical questions. The author skillfully yet respectfully shows how world religions are not the same and how one must make honest decisions about which is true. I appreciate Zacharias' apologetic works because while he is fully capable in the area of logic, he also approaches his subject with a very human and personal touch. The section in this book on the question of evil is especially good.

I thought that the book was excellent

Published by Thriftbooks.com User , 22 years ago
I write this mainly in response to the first review of this book. The person's first critique of the book was that Ravi had treated Buddha as a god, whereas he was not nor did he claim to be. Two quotes from the book I think will suffice to show how this misrepresents the ideas expressed in the book, and begs the question, has this person read this book, and if so, how carefully did they read it? On page 5, Ravi refers to Buddhism as a "non theistic, if not atheistic religion." Again on page 90 in reference to Buddha's stance on allowing women as disciples, Ravi says, "Whatever one may make of all this, we must be clear that in a non-theistic system, which Buddhism is...."Implicit in both of these statements is the realization that Buddha did not claim divine status, rendering the argument made by the first reviewer inaccurate.I found the book to be compelling, and the information presented, clearly demonstrated the uniqueness of the message of Christ when contrasted against other prevailing worldviews.In reference to the comment about Ravi's hypocrisy, I would merely point out the lack of differentiation between an argument and a person. If indeed one man fails to live up to the claims of Christ, which the bible clearly states is impossible for man without divine intervention, the message itself is not compromised. Especially when the inability of man to do so is implicit in the message. The message of Christ stands on its own even in light of the attacks of its critics from all sides, and in light of the failure of His followers. (It should be noted that I am not at all implying that Ravi is a failure.)First, the first reviewer is basing his/her claim of Dr. Zacharias' hypocrisy on a request in a review that he may never see, responding to a person who included no address to which to mail a check.Second, The argument is based on a person's obedience to a command; not the validity of the one who gave the command, therefore, the criticism fails to disprove the christian message.Third, the argument seems to be a verbal smokescreen composed of second-hand doubt to hide behind in order to justify the refusal to come to terms with the personal implications of the christian message being true. I mean this in no way to offend the reviewer.The book, which I think was excellent, discussed how Jesus' claims are unique, and would not have been made by the founders of any other religion. My personal favorite chapter was entitled "a taste for the soul." In this chapter, Ravi points out how Jesus constantly pointed people to a need that was deeper than their physical hunger, to a spiritual hunger that everyone has. He goes on to say that when Jesus says he is the bread of life he is establishing himself as the source of satisfaction, and is actually positing himself as his message. In other words Jesus doesn't point us to satisfaction; he is our satisfaction. As Ravi points out, other founders of religion
Trustpilot
Copyright © 2022 Thriftbooks.com Terms of Use | Privacy Policy | Do Not Sell My Personal Information | Cookie Preferences | Accessibility Statement
ThriftBooks® and the ThriftBooks® logo are registered trademarks of Thrift Books Global, LLC