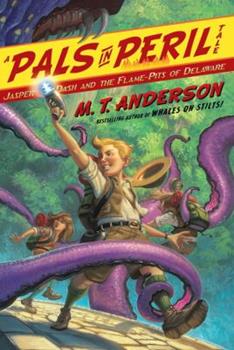 Jasper Dash and the Flame-Pits of Delaware

(Book #3 in the Pals in Peril Series)

It is a land of wonders. It is a land of mystery. It is a land that time forgot (or chose specifically not to remember). Cut off from the civilized world for untold years by prohibitive interstate tolls at the New Jersey border, this land is called: Delaware. It is into the mist-shrouded heart of this forbidden mountainous realm that our plucky and intrepid heroes Jasper Dash: Boy Technonaut, and his friends Lily Gefelty and Katie Mulligan, must journey...

This one had to grow on me

Published by Thriftbooks.com User , 11 years ago
You really have to be over 50 to appreciate the plot of this book (or a old time SF geek). If you were so lucky as to be a 12 year old kid in 1920 and hung off of the words of Edgar Rice Burroughs' fiction you will understand this book completely. Otherwise required reading might be John Carter of Mars, A Princess of Mars and, so on. Jasper Dash is obviously modeled off of a 1920's pulp fiction character and in keeping with this theme the book is modeled off of the same genre. Fortunately the book is entertaining on its own but, I will admit the style can be a bit tedious all at once. I got the book read by Mark Cashman ( Cashman is brilliant at the voices) on CD for my nine year old daughter who loved Whales on Stilts and Lederhosen (...she was a nun, she was a nanny, we thought she could fly...) and I must admit that it took a couple of listens before I really started to enjoy it thoroughly. She however is not affected by the style and regularly adds it to her list of spoken books that she chooses. So perhaps over 50 or under 16 is more appropriate.

Published by Thriftbooks.com User , 11 years ago
I've read several of M. T. Anderson's books now, and I'm amazed at the depth he can maneuver in literary waters. He can write intriguing fantasy stories, nonsensical adventure stories that belong in the pulps, and serious historical fiction for kids. Jasper Dash is definitely a fun book. You can see that from the cover. The prose is easy to read, the adventure is fun to bang through, and the sensibility is that of a Tom Swift adventure on speed. This is one of those books that I'll have to read to my 12 year old. I wish I'd known that at the beginning. I would have stopped reading, but school's going now,and the book was just too easy to read. The black and white illustrations throughout are a lot of fun as well.

Published by Thriftbooks.com User , 11 years ago
According to M. T. Anderson's latest inspired bit of lunacy, that would be a blrga-shirt and pochbtvms, traditional dress of Dover (see illus. by Kurt Cyrus on page 130). I had resigned myself to loving this book because I had loved the previous two books in this series: Whales on Stilts and The Clue of the Linoleum Lederhosen, but I did worry about what the author was going to do with all the extra pages, this book being twice as long as the first one and half again as long as the second one. As it turned out, he used the extra space to produce arguably the craziest travel novel ever published, depicting "the jungles and mountains, the beaches and subaquatic cities, the volcanoes and ziggurats, the deserts, caverns, lost temples, and spires... of Delaware," defended it by claiming complete ignorance of Delaware except for twenty minutes he once spent on the tollway from New Jersey to Maryland, and urged any readers who questioned his description to write to the Governor of Delaware at the address he helpfully provided. Note: Delaware Governor Jack Markell deserves some kudos for reacting to this lunacy with good humor; his letter in response, currently available on the publisher's web site, is funny enough that it ought to be included in future editions. I'd also like to hear a recording of M. T. Anderson's crazed replacement for the official state song. I'm forced to admit that I consider this to be the best of these books so far. Either Mr. Anderson is betting better, or my standards are starting to slip because now IMHO Mr. Anderson is fully three quarters as funny as he thinks he is. In addition the characterization is becoming more realistic,... relatively speaking. I've never been to Delaware. My father was born there, and from his description, it didn't sound that interesting, but now I might just have to visit. If I do, I'm taking this book along and bringing it into the first Delaware Visitor's Center I see... just to see if their sense of humor matches the governor's.

Meant to be read aloud

Published by Thriftbooks.com User , 11 years ago
Some of the feedback is missing the point? I have read all three of the Lily, Jasper and Katie books aloud twice to my now-9 and 12-year olds. When the allusions are too obscure, the parody too arcane, they ask. Either the anything but MT-headed Mr. Anderson does read them aloud before they publish or he has an incredibly rich inner life. These books are a great way to read with and to your young readers.

Published by Thriftbooks.com User , 12 years ago
I'm not sure why those who did not enjoy this book describe it as overlong or unplotted or poorly written. I suspect that the majority of Anderson's wit went right over their heads. I found it to be a complete delight, giddy in its determined inventiveness and rapturous in its assault on the world of children's series. Nearly every page contained a sly reference to some great children's book or other cultural signpost. (In the description of Lily's boring town, there was even a reference to Alfred Hitchcock's "The Birds"!) And Anderson's loopy, grotesquely exotic world of Delaware was hysterical from beginning to end. I was astonished at the end of the book, during the celebration at the monastery, when the narrator turned rhapsodic about joy and the sense of place. For a book that had kept me laughing out loud for the majority of its pages, I was surprised to be brought to tears. Those who suggest that the author of "Feed" and "Octavian Nothing" has come up short in this book have failed to get the point themselves. This book is a fine work, one of dense style perhaps, but a huge reward to those who are willing to submerse themselves in Anderson's subversive world.
Copyright © 2020 Thriftbooks.com Terms of Use | Privacy Policy | Do Not Sell My Personal Information | Accessibility Statement
ThriftBooks® and the ThriftBooks® logo are registered trademarks of Thrift Books Global, LLC