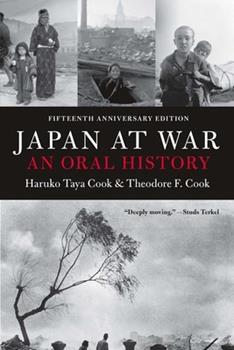 Japan at War: An Oral History

A "deeply moving book" (Studs Terkel) and the first ever oral history to document the experience of ordinary Japanese people during World War II"Hereafter no one will be able to think, write, or teach about the Pacific War without reference to [the Cooks'] work." --Marius B. Jansen, Emeritus Professor of Japanese History, Princeton UniversityThis pathbreaking work of oral history by Haruko Taya Cook and Theodore F. Cook was the first book ever to...

A "must read" for anyone who want to understand the Japanese psyche during the war.

Published by Thriftbooks.com User , 16 years ago
Being an ethnic Chinese, though born after the war, I just couldn't understand the Japanese inability to accept that they have been behaving in a most atrocious manner during the war, given the massive amount of evidence that has been accumulated to prove that point. Despite there being so much evidence pointing to the fact it was the Japanese who started the war, and yet, they seemed to think of themselves as the victims rather than the victimizers. That was something I couldn't understand. But now, having read this book, though I don't agree with them, I could, in an intuitive sense, understand them. At the beginning of Part Four, on page 259, it's printed these words: "Umi yukaba, misuku kabane...Across the sea, corpses soaking in the water, Across the mountains, corpses heaped upon the grass, We shall die by the side of our lord. We shall never look back." "Umi yukaba.." is from a collection of poetry known as Manyoushu, which dated from around 700 AD, around the Nara, Heien period. This specific poem, "Umi yukaba..." was set to music in 1937, and after 1943, it preceded radio announcements of battles in which Japanese soldiers "met honorable death rather than the dishonor of surrender." In a flash,I understood the mentality of the time. They were really still set in the medieval feudal samurai mentality. The veneer of modernity was just that, a veneer of modernity. They might be able to build and master complex machinery of the modern twentieth century, the mentality was still of feudal Heien period. Their treatment of the conquered people was justified. That's how the Heien period warriors behaved. Their perception of themselves as the victims were justified. That's what samurai warrior would feel. They were all prepared, or at least indoctrinated to be prepared to die in the service of the emperor. I cannot imagine any other country which would announce their battles lost with such a song. The army doctor, Yuasa Ken, described his wartime experience, that of experimental surgery on perfectly healthy, well except for the fact that they have been starved, perfectly healthy Chinese. To them, there was nothing wrong. The Chinese were the conquered people. The Imperial Army needed doctors to treat the wounded soldiers, so many doctors were recruited into the army, including pediatricians, dermatologists, ophthalmologists and so on. These doctors have no experience in treating trauma injuries. How to train them? What better way than to use the Chinse as experimental animals for their training. Only in the light of the concept of "human rights", a concept developed in the West, was that kind of experimenation considered wrong. In the feudal samurai ethics, that was not considered wrong. Now look at the situation this way. From the samurai ethics point of view, they had not behaved wrongly. But after the defeat, and the acceptance of the world view of "human rights", what they have done was definitely wrong. However, in their minds, they ha

An Illuminating View from the Other Side

Published by Thriftbooks.com User , 16 years ago
I have sought, over the years, to try to understand the nature of our enemies in war. Some wars, like WWI, were essentially fought over the issue of power and control. Some wars, like the US Civil War, get redefined periodically and often to the advantage of who's redefining it. Today, July 4, is a good day to reflect on our Revolutionary War and, although I don't do it annually like I feel I should, reading the Declaration of Independance is an excellent way to understand the grievances that led to war. It is WWII that had been my biggest challenge to comprehend and it was the Japanese side of this conflict that I understood the least. I can't say that one book clarified everything I didn't understand but "Japan at War: An Oral History" put me on the fast track to getting there. This is an amazing book in many ways. First, the scope of the book covers the many different facets of the Japanese experiance in WWII. For example, the war begins for them with the invasion of China and the conquest of Manchuria; aspects we generally know little about. It has a chapter on the kamikazi's and the similar sailers who volunteered to man suicide torpedos. It looks to the glory of the height of conquest and to the chaos and destruction of the waning days. It takes a look at the little mentioned Soviet invasion of Manchuria (that began after The Bomb). It takes a brief look at post-war Japan as well. It does all of this through the interviews the authors conducted with a number of soldiers, sailers, officers, civilians, and conscripts. To their credit, the husband and wife team of Haruko Taya and Theodore Cook constructed their book by publishing the reminiscences of their subjects. We read the words they heard supplemented briefly by overviews provided by the authors. This first-person recounting of events and the reactions to them brings everything to life for us. Whatever passions we may have from our own perspectives are, at least temporarily, set aside with the riminder that war victimizes everyone it touches. The Cooks have done an excellent job of finding persons who were not only first-hand witnesses but excellent historians as well. The stories that they were able to collect were so personal and down-to-earth that the one exception (a professor's educated treatise on the censuring of textbooks) sticks out noticeably in comparison. The witnesses let us in on many events but it is their editorial perspective of how these events changed their lives (and the lives of other Japanese) that reaches across the animosities of war and touches us deeply. There are interviews with some of the volunteer suicide soldiers who would have carried out their mission but for time and/or equiptment failure. There are stories of Koreans brought to Japan and insights on how they were treated. However, the most impressive were the stories of the witnesses and survivors of the Atomic Bombs that fell on Japan. Whatever your feeling on this subject are

YOU HAVE TO GET THIS BOOK!

Published by Thriftbooks.com User , 18 years ago
We read this book in a Non Fiction class that I took. I never would have known to read it otherwise, but I couldn't put it down. Every single story in there is shocking and amazing. This is the stuff they don't teach you in school. The stories are written by bomb victims from Hiroshima, villagers who were told to run at the enemy with grenades and become human bombs, doctors who preformed horrible opperations on the chinese during their occupation, wives of kamakaze pilots, and so many more. I'd recommend it to anyone, and have given it as a gift several times. If you like to know the story behind the "story" then this book is perfect.

A FASCINATING PERSPECTIVE FROM THE OTHER SIDE

Published by Thriftbooks.com User , 19 years ago
A remarkable tour through the Japanese war in China in the 1930s, the salvage man to man combats in the Pacific islands, the horrific bombings of Tokyo, Hiroshima and Nagasaki and the aftermath of a totally devastating war on the psyche of the Japanese people.Haruko Taya and Theodore Cook have done a remarkable reconstruction of this story, through the testimonies of the "other" protagonists.One cannot came out of this tour, but with another perspective about the motivations and commitment of the people who fought or endured the destruction of this war, from the Japanese side. Common people and soldiers, willing to pay the ultimate price in order to defend their patriotic and religious believes, give a different, individual, impression from the one we derive from the analysis of the motivations of the War Lords and the militaristic complex in Tokyo. Some fascinating facts are confirmed in this book . We have the story of private Tanisuga Shizuo, gas soldier in China from 1937, candidly telling some truths about the use of poison gas in that front. Now he is seeking compensation from the Japanese Government for the injuries he suffered while making poison gas during the war........ Tominaga Shozo gives a truthful account of the training of soldiers in China. That training included the practice of the proper technique to use the sword to decapitate live prisoners. Also, the last stage of conscript training required him to bayonet a living human, in order to condition soldiers to kill without remorse or hesitation during combat. The book contains some foggy accounts about certain events, like the story told by Tanida Isamu, staff officer in the 10th Army, during the period of the rape of Nanking (self denyal?) about the appalling number of civilians killed in the incident.But the balance is surely positive, if you consider the moving stories of sacrifice told by the people in the Homeland, and the individual mystical motivations of the soldiers engaged in Special Attacks.A revealing book, which I consider required reading for those interested in the War in Asia.

Published by Thriftbooks.com User , 20 years ago
...if you are interested in history in general, or this war or nation in particular, then you must have this book. It is the definitive oral history from the perspective of the Japanese people.Most of the interviews are with "common folks", only a few in positions of war-time influence are here. This is natural, given that these interviews were conducted long after the war ended. Also, similar to Studs Terkel's work, these are "worm's eye" views, very personal, very moving, with necessarily limited fields of view. Regarding "david"'s comments in the preceding review: the issue of blame is not squarely addressed by most of the people being interviewed. Unlike david, however, I do not find this disturbing. These are common people. Like the interviewees in Terkel's work, they were caught up in a conflagration, moving from one private experience to another, motivated by needs of family and friends and simple survival. After the defeat, they were then caught up in the re-building. They buried their private pain, with these interviews, in many cases, being the first time they shared their experiences with anyone. This INCREASES the value of the oral history, it does not decrease it. Also, the authors clearly address this issue of "blame avoidance" and provide speculative, but very sensible, reasons for it. Not justification, quite the opposite, just reasons. Finally, some of the more well-educated interviewees DO address the issue. I have had this book for years and have re-read it many times, always with a little greater understanding and appreciation for its value. When you consider that the individuals born after the war are still DISTINCTLY uncomfortable talking about it (even in private, even between husband and wife), this shows you just how searing the experience was for the Japanese and how priceless this window into the Japanese soul really is. How much more do you want for the 12 bucks or so that it costs?Again, it is a "must have" for anyone with an interest in history.
Trustpilot
Copyright © 2022 Thriftbooks.com Terms of Use | Privacy Policy | Do Not Sell or Share My Personal Information | Accessibility Statement
ThriftBooks® and the ThriftBooks® logo are registered trademarks of Thrift Books Global, LLC