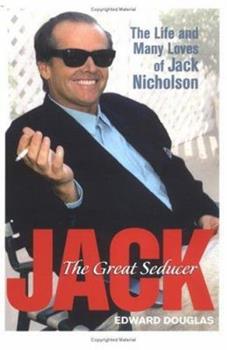 Jack Nicholson is one of the longest-lasting and most recognized sex symbols of our time. This sizzling biography goes deep in-depth, relating exclusive interviews with past flames and flings, to shed light on the unique charisma and magnetism of one of America's most respected and desired movie stars. Among the startling revelations: A longtime girlfriend who describes Jack's reaction when he at last discovered the long-buried, dark secret of his...

Excellent overview of his life and loves

Published by Thriftbooks.com User , 16 years ago
as a casual movie goer who is no specialist on Jack's romantic and professional history, I found this to be a very comprehensive, continuously enlightening tour through all that he's accomplished in his amazing private and public life... although I couldn't help but be familiar with his reputation as the consumate rogue, I had no idea of the staggering quantity (and quality) of his conquests and of the 8 kids he's fathered and what's become of so many figures in his life... a very enjoyable read...

Published by Thriftbooks.com User , 17 years ago
"Jack: The Great Seducer" offers an excellent chronological and referenced account of his interworkings with the women in his life and career. The book itself offers one new revelation I was unaware of in the likes of Cynthia Basinet. Depicted as one of Jack's gals and downplayed as an "aspiring singer", I found her compassion, courage, insight, and humor within what seems to have been a geninue love affair to be inspiring. Cynthia is a single mom who took to assisting W. Sahara refugees after separating from the actor. Upon further research, I discovered Miss Basinet single-handedly transformed her career as a successful model/actress into a recording artist with a philanthropic platform with no apparent assistance from JN. Her rendition of "Santa Baby" was originally recorded for Jack as a Christmas gift, and has gone on to become a Holiday favorite. It's the version often thought to be Marilyn Monroe, which appears in the 2003 film "Party Monster". On the surface, the book resonates as a rah-rah "harem" lifestyle most men only fantasize about, however as I gave it more thought I couldn't help but wonder: where is the love?
Trustpilot
Copyright © 2022 Thriftbooks.com Terms of Use | Privacy Policy | Do Not Sell or Share My Personal Information | Accessibility Statement
ThriftBooks® and the ThriftBooks® logo are registered trademarks of Thrift Books Global, LLC