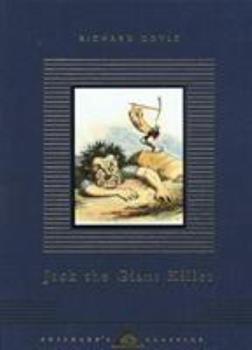 The story of Jack, the intrepid boy whose courage and ingenuity defeated a host of many-headed giants, has been told to children for hundreds of years. In 1842, when he was just 18, Richard Doyle,... This description may be from another edition of this product.

A Wonderful Imagination with a Taste for the Grotesque.

Published by Thriftbooks.com User , 16 years ago
The author Richard Doyle was the son of a political caricaturist who went on to become a very gifted artist in his own right. In addition to working at some famous magazine of the time (called "Punch"), he also did the illustrations for the "Fairy Ring" (1846) which was a collection of newly translated Grimm's Fairy Tales. He combined a wonderful imagination with a taste for the grotesque. In 1842, while still a teenager he took a popular collection of traditional giant tales out of "The Child's Own Book" and retold it with such wonderful illustrations that it turned it into a classic. This is not "Jack and the Beanstalk". There is no magic beans, or golden goose. It's the story of a little boy named Jack and his adventures as he has to fight and kill several giants in some very gruesome ways. I don't know if I'd recommend this book for anyone faint of heart. In most tales he outsmarts the giants. In others he uses special gifts he has obtained, including a Cap of Knowledge, Shoes of Vast Swiftness, a Sword that can cut through anything, and a Coat that turns him invisible. The giants are very mean, and kidnap and eat people, but still for some reason or other, I couldn't help but feel sorry for some of them at times when Jack, who was already so much smarter than the giants, also becomes better equipped than them as well. Towards the end I guess I got the feeling that he had an unfair advantage. During one of his later adventures Jack briefly travels with King Arthur's son and eventually becomes a Knight of the Round Table. It was a very entertaining book, but a quick read. It was only 92 pages in length and most of those were taken up with the picturesque illustrations.

Published by Thriftbooks.com User , 17 years ago
This book, a title in the Everyman's Library Children's Classics series, is a retelling of an old, old story. Richard Doyle was 18 in 1842. He copied the text of this book from a fairy tale that was already hundreds of years old, and he illustrated it with his own drawings, turning it into a picture book. He did this for his own amusement; he did not try to publish it. But five years after he died, his family published it, in 1888. The book is chock-full of drawings. Full-page and half-page pictures, plus small paintings within the sentences themselves, can be found throughout. And the text itself is fun to read, especially from our modern-day viewpoint and what we've learned to expect from stories. For example, you won't find as much conflict and drama as you're used to. Jack decides to kill a giant, he goes out, and he kills the giant. He never loses, and the giants don't really put up much of a fight. But the story is still interesting because Jack defeats many different kinds of giants --- one-headed, two-headed, and even three-headed ones. And slaying isn't Jack's only claim to fame. Sometimes he doesn't kill the monsters, he just outsmarts them. The old-fashioned language of the story is fun to read, and some of the storyteller's phrasing might even make you laugh. Here is an example: "Now Jack, though only the son of a poor farmer living in Cornwall, was very clever, for he not only fought and wrestled with all the youths within twenty miles round but he beat them likewise. Can it be wondered at that under these circumstances he should be his father's hope and his mother's joy and that the neighbours should look upon him with the greatest respect?" We might not admire little boys who fight quite as much as they admired them hundreds of years ago, but for Jack's chosen occupation, it was a necessity and it brought him great renown. You will love the pictures, the fast pace, and exciting exploits in Jack's story. King Arthur even shows up on the scene, fitting in perfectly in this fairy-tale world of pure-hearted knights and fair damsels, castles and moats, and magicians with their enchantments. Don't miss this classic. ---Reviewed by Tamara Penny

Published by Thriftbooks.com User , 21 years ago
Jack the Giant Killer requires good reading skills but tells the story of Jack, an intrepid boy who sets out to kill giants. Draftsman/author Doyle's watercolors have been enlarged for this edition, and text given greater legibility: the result is a beautiful Victorian classic easily accessible to modern audiences.
Trustpilot
Copyright © 2022 Thriftbooks.com Terms of Use | Privacy Policy | Do Not Sell My Personal Information | Accessibility Statement
ThriftBooks® and the ThriftBooks® logo are registered trademarks of Thrift Books Global, LLC