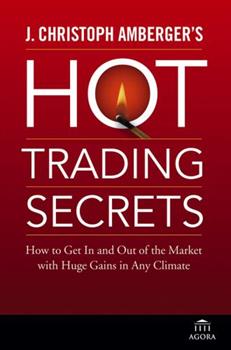 J. Christoph Amberger's Hot Trading Secrets: How to Get in and Out of the Market with Huge Gains in Any Climate

Master the market for maximum profits with HOT TRADING SECRETS Playing the trading game takes audacious confidence, but winning takes more. It's about making chances instead of taking chances. As founder of the remarkably successful Taipan Group-a team of independent financial analysts-author J. Christoph Amberger knows: "There is always an opportunity to make exceptional stock market profits . . . as long as you know how to read the signs." In Hot...

Published by Thriftbooks.com User , 15 years ago
C'mon, Chris, quoting Karim Rahemtulla as an "independent" reviewer is misleading and sleazy - Karim operates an option trading service (specializing in covered calls, iirc) that's part of the same Agora "empire" as the Taipan Group - why don't you get "independent" reviews from Porter, or Steve Sjuggerud, or Chris Mayer or Dan Denning (maybe he's the Dan who reviewed the book, or was it Dan Ferris..)? It's a touch suspicious as well that two of the four positive reviews come from Baltomore or the Maryland suburbs, Agora's and Taipan's home base - ask for some favors down at the Yacht Club, did we? I've been a happy subscriber to Taipan for years, and I've always liked Amberger's work. Four stars for a good book, demeaned by Chris's response in this list of reviews.

It's No Secret When Trading with Mass Media

Published by Thriftbooks.com User , 15 years ago
Trading services are a dime a dozen, or more accurate, about $1,000 a whack. So to find one that works, that works consistently and that works in all markets can be an incredibly expensive endeavor. Thank god then for a book like Hot Trading Secrets. In it, Amberger gives an overview of what he calls 13 trading secrets - really 13 different types of trading systems - and the foundation of each. In my mind then, Hot Trading Secrets provides about $13,000 in valuable trading education. The book was also a welcome relief in that it tackles the world of trading systems in language that's easy to understand. For this reader, too many times the only reading that's available for trading services are the self-agrandizing promotions that seem to endlessly land in my e-mail inbox or hardcopy mailbox. I've given up trying to cut through the hype of those things to try to find a nugget of truth. But again, that's where Hot Trading Secrets differs. And don't worry, I'm not so blind that I can't see that Amberger would certainly have us buy his services. But he amps down the hype quotient in favor of discussing how the specific services cleave to his group's particular brand of Dynamic Market Theory. And so much of it makes sense, especially in the way that he discusses how the media perpectuates highs, lows, middles, all levels. It's virtually impossible to discuss today's markets without discussing media's impact on them. And that's where I have to hand it to Amberger... A couple of his systems hinge on this media-crux, and that's where you can bet I'll be using my speculative cash. Finally, for what it tries to do, educate on proprietary trading systems, Hot Trading Secrets is very good. I would have no qualms recommending it to traders... and not even to family members - as long as they're using their speculative cash.

Published by Thriftbooks.com User , 15 years ago
I can say, as a long time subscriber to all of the trading services mentioned in this book, that it's worth a read. I've made a fortune trading with this group of people over the last four plus years. I can't say enough positive things about them.

The Author responds: "Everyone's a critic!"

Published by Thriftbooks.com User , 15 years ago
One of the "Ninja Secrets of Invisibility" is that a man, looking forward, cannot see the tip of his toes, even when he's not shaped like John Goodman. The average person is also unable to see his ears, or other things just outside his range of peripheral vision. "That's not a secret, I knew that all along" clamor those who just bought the book on Ninja Secrets of Invisibility (there's actually a few of them) -- not noticing they are standing on a fifty-dollar bill. Relish the irony: While former also-rans of the 2004 gubernatorial race in California grouse about the non-secretiveness of Hot Trading Secrets and the fact that they've read some of it before in my free Dynamic Market Alert, those who've actually been applying our "secrets" are sitting rather pretty: For example, since the book came out in late November 2005, followers of the Extreme Volatility strategies detailed in Chapter 10 had the chance to walk away with profits of 18%, 110%, plus a one-day gain 62% and a one-day gain of 50% on GM news. (Right now, they're up more than 180% on Tyson Food puts as weak hands get shaken out not only on earnings but on the fear of bird flu...) Volume Spike Alert traders (detailed strategies are outlined in Chapter 9) just were advised to sell GoRemote Internet Communications for gains of 24.63% after the system had pinpointed unusual trading activity in October... two months before the company announced it would be bought out for a hefty premium. Our December play on an uranium stock volume spike is up 30%... and December has been a bit of a slow month in regard to volume spikes. The RedZone strategies (outlined in Chapter 13 as trading secret number 7) -- which are designed for the medium term rather than rapid turnaround profits, banked safe, solid returns like 28% on Nvidia, 37% on Qlogic and 35% on VCA Antech. But the system also cranked out an amazing amount of triple-digit "kickers"-like 147% on Biophan, 122% on Penn National Gaming, 193% on Hollis-Eden calls, 127% on PetroKazakhstan calls, 302% on Aastrom Biosciences, and a phenomenal 3-day gain of 515% on PalmSource calls after our suspicions of a buyout proved true. The RedZone's unaudited average gain for the year (thus far) is 13.57%-a gain that beats the Nasdaq's nudge by 248% and blows the Dow away by 1,030%. And we're ready to do it all over again in 2006. All track record claims quoted above are, of course, still subject to our rigorous legal auditing process. But even based on these unaudited and preliminary numbers, keep in mind that these were generated based on just three rather basic strategies we outline in Hot Trading Secrets. Pretty decent haul for "secrets that are no secrets"? You betcha. That's the point! But don' listen to me! Here's what others have to say: "Hot Trading Secrets is a excellent compilation of the various technical trading strategies created by the Taipan group. It provides any investor, novice or advanced, an important insight into the world

Published by Thriftbooks.com User , 15 years ago
I have read many books on trading. Most inundate the reader with technical mumbo-jumbo making them not only boring, but barely worth reading. While Mr. Amberger's book does include some technical information, he focuses much more on the theories and innovative systems behind the numbers. Once you understand how these systems work, then trading for profits seems like a more practical way for the average investor to make money in the market. Mr. Amberger also provides us with a healthy dose of plausible economic predictions. Even buy and hold investors will find these sections enlightening. S. Franks
Copyright © 2020 Thriftbooks.com Terms of Use | Privacy Policy | Do Not Sell My Personal Information | Accessibility Statement
ThriftBooks® and the ThriftBooks® logo are registered trademarks of Thrift Books Global, LLC