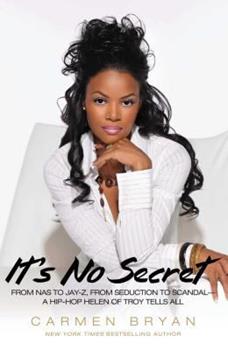 It's No Secret: From NAS to Jay-Z, from Seduction to Scandal--A Hip-Hop Helen of Troy Tells All

Carmen Bryan is no stranger to the rap world. Not only did she work at Def Jam and Capitol Records but she shares a daughter with hip-hop superstar Nas -- a relationship made extremely public through Nas's celebrity status, rap lyrics, and the ever-present media. Now, in It's No Secret , a strong, resilient Carmen bares all, telling her side of the story and leaving no detail unturned -- with the true candor and raw emotion of someone who has been...

WOW! This book is HOTT!!

Published by Thriftbook reader retnjie , 1 year ago
I loved this book. Carmen is better woman than most. Especially all the drama she went thru with Nas And Jay-Z (whom ahe affectionately calls SC). Most women would have been out of there but not her, she did what she had to for her daughter

Published by Thriftbooks.com User , 11 years ago
I can't believe it. I never knew must of this stuff. I had to download the songs in question because I had never heard them. I even looked up the lyrics online. I loved the book. It was great. I'm just shocked by some of the things mentioned. If you want to find out, you must read.

couldnt put it down

Published by Thriftbooks.com User , 11 years ago
i really enjoyed reading this book i couldnt put it down. its crazy how the lifes of people in or associated with the music biz get down

This Is Her Life Let Her Live

Published by Thriftbooks.com User , 14 years ago
I will start off by saying I took along time to read this book. The reason being the reviews well I won't let that effect me again. This book is a good read. I think the problem people have with it is because they are looking for another tell all like Karrine Steffans and this is not that type. She is telling the story base on her trial and tribulations in her life. Which happen to include some well known people. She is basically saying that her life is no differnt from anybody else she makes bad choices and she has to deal with it. I mean did anybody read her final words in the book where she says there are no victims or villians. Meaning everybody knew how the situations could turn out. With that being said Everybody Get Over It. To tell the truth people will probably be up set with Karrine new book if she doesn't drop enough names.

Published by Thriftbooks.com User , 14 years ago
I thought the book was very tastefully done. It was exciting and believable. It is funny to me that when a woman is promiscuous, she is called a slut but when it is a man he is "the man". Carmen had a story to tell and she did, kudos to her. I don't think this is the end for Nas and Carmen.

Published by Thriftbooks.com User , 14 years ago
This book was excellent, it was a great read. I enjoyed the concept of the book and I wish it had a sequel, but I know that was impossible. I would recommend this book to anyone who likes to read.
Copyright © 2020 Thriftbooks.com Terms of Use | Privacy Policy | Do Not Sell My Personal Information | Accessibility Statement
ThriftBooks® and the ThriftBooks® logo are registered trademarks of Thrift Books Global, LLC