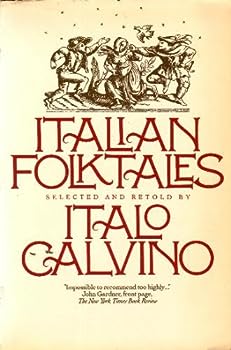 This description may be from another edition of this product. One of the New York Times 's Ten Best Books of the Year: These traditional stories of Italy, retold by a literary master, are "a treasure" ( Los Angeles Times ). Filled with kings and peasants, saints...

Published by Thriftbooks.com User , 15 years ago
This collection of Italian folktales, collected and rewritten by Italo Calvino, is a cornucopia of tiny tales. The 200 stories (twice the number in that other great collection of Italian tales - the Decameron) of this 700 page book sparkle with wit and provide insight into the minds of the poorer classes of medieval and premodern society. The tales are, according to the introduction, from previous collections made by folklorists, mostly during the 19th century, when people still made a hobby out of collecting such things. The stories come from all around Italy and each has, at its conclusion, the name of the region from which it was drawn. I am under the impression that Italo Calvino rewrote them from their original dialects into standardized Italian. He also added his own special touch, distilling, trimming and rewriting them as only a master could. The English translation by George Martin is taut and clean and makes the read all the more enjoyable. The book includes an introduction by the author, somewhat scholarly in nature. It also has a note for each story discussing technical issues and origins. It could be used as a scholarly reference for folklore studies but it is a delight to read just for pure pleasure. If you are looking for a book of fairytales for your children this collection is probably on par with the Grimm Brothers or the Red Fairy Tale Book. It was written, however, considerably later, in 1956. The book shares with these collections (their unexpurgated versions at least) a certain earthiness, an occasional tendency towards brutality and a distinct lack of political correctness. If you are offended by golden donkey dung, witches defenestrated, tarred and burned at the stake, or princesses killed by their husbands later resurrected and remarried to their repentant murderers, you might want to avoid this book. At the very least you might want to pick and choose which tales you read to your children. Not that the tales dwell on these things in detail but you will encounter them. You will also encounter the three little pigs (as geese), little Red Riding Hood as herself, a Snow White who falls in with thieves, a Sleeping Beauty awakened not by a prince but by her newborn child, and Aladdin, Ali Baba and Ulysses dressed up as merchants, peasants and monks. One can also hear vague echoes of celtic mythology, prehistoric magical rites and even a plot I find reminiscent of Gogol. Two hundred stories is quite a few and while there are occasional variations on a theme, on the whole they remain remarkably fresh. Just when you think you've seen everything, a new plot twist comes along to enchant and amuse.

Published by Thriftbooks.com User , 17 years ago
I haven't been a particular fan of folk tales in the years that have passed since more or less my tenth birthday, but it's hard not to adore this charming, magical, and fantastic collection of traditional Italian stories as recounted by master storyteller and author Italo Calvino.In the book's introduction, Mr. Calvino seems to regard his production of this almost 800-page volume as a sort of obligation. But in reading its pages, it's clear that it was really a labor of love, a massive project undertaken by an already established writer who had no need to produce something so unusual and challenging in order to help his own reputation. But we are clearly better off because of he did produce it. Inside are exactly 200 precious stories, parables, fables, and good old fashioned yarns -- all of them plucked from the Italian folk tradition, dusted off, and improved by Mr. Calvino. I admit that "improved" is not a word I'd usually want to read in regard to a modern production of classic literature, but from the bits and pieces I know from experience, improvement was needed: many of the tales were originally published based on cobbled together version of traditional oral stories with partially-developed sub-plots and characters whose names or motives change partway through the story. I have seen the original Italian versions of at least three of the stories between this book's covers -- Fra Ignazio, Rosemary, and the Peacock Feather -- and was thoroughly confounded by the original, only to be charmed later by Mr. Calvino's cleaner and more thoughtful retellings.It is important to remember that the Italian literary tradition dates further back in a direct line than any other in Western Europe: many of these tales were originally written in Italian long before the language evolved beyond being anything more than a vulgar street slang and when only Latin and Greek was spoken in the drawing rooms of literate Italians. And yet it wasn't until 1956 and Mr. Calvino's self-described obligation that more than a couple dozen or so of these wonderful stories was gathered in a single volume. Hats off also to George Martin, Mr. Calvino's translator, surprisingly enough, for only this book. Mr. Martin does a terrific job of preserving Mr. Calvino's cadence and subtle linguistic flare, and he does it while staying away from the temptation of translating too literally, a flaw that has a hold on many less talented translators.

Published by Thriftbooks.com User , 18 years ago
Here's a tip of the hat to the English translator (George Martin) of this wonderful collection. If you've noted the glowing reviews and prizes, you might still hold back, thinking "Well, I'm sure it's fantastic in Italian, but the English probably doesn't quite capture the brilliance of the original." Maybe so, but -- unless you're fluent in Italian -- there's no reason to skip this sparkling, wonderful English translation. It's -- well, delicious.I first read this book years ago -- out loud, to my kids, and it quickly became a family favorite. Be aware that this collection isn't your usual compendium of "I've heard that before" stories. They're all rather strange; sometimes, they're downright weird, as if the good folk of traditional Italian villages were tuned into the X-Files several centuries ago. Some of them -- my favorite example is "Ari, Ari, Ari, Money, Money, Money" -- are flat-out, bust-your-gut hilarious. If the stories don't do you in, you'll find some of the most gorgeous and unforgettable English you'll ever read, thanks to the brilliant translation. It's spare - it's closer to Hemingway than Faulkner, perfectly pitched to its task - and exquisitely structured and paced. This is a book that truly belongs on every shelf. Give it for the holidays, birthdays, or for the hell of it -- and, please (if you love English and fine writing) treat yourself.

Magical reading aloud for both adults and children

Published by Thriftbooks.com User , 23 years ago
Read this book to yourself, or better, aloud to your favorite adults and children. The tales, some short and some longer, offer magic, fantasy and adventure for the kids and sly insights into human nature for adults. The tales are not "dumbed down" as unfortunately happens in some folktale collections. Calvino preserves the flavor of the spoken word, but these stories work as literature, too. For the scholarly-minded, an appendix in the back gives the provenance of each story.

An easy road to the future

Published by Thriftbooks.com User , 24 years ago
Some books are best read nightly in small doses. A novel we pick up at any time, bound to the characters and their impulses; poems become a solid mass of emotion as we touch their seemingly amorphous edges. These folktales, retold by Mr. Calvino, allow us to take our world in by stripping down our guard. We laugh at the comical characters and the fanciful predicaments they find themself in, only to have our laughter fulfilled by understanding. These stories are as much about us and our deepest fears, emotions and it is only one by one that we can approach these tales, because otherwise we waste the lessons they teach us. Incredible reading
Copyright © 2020 Thriftbooks.com Terms of Use | Privacy Policy | Do Not Sell My Personal Information | Accessibility Statement
ThriftBooks® and the ThriftBooks® logo are registered trademarks of Thrift Books Global, LLC