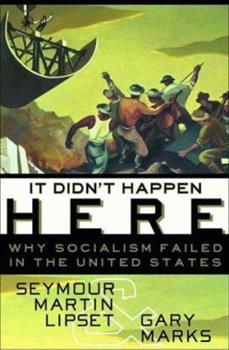 It Didn't Happen Here: Why Socialism Failed in the United States

This description may be from another edition of this product. Why socialism has failed to play a significant role in the United States--the most developed capitalist industrial society and hence, ostensibly, fertile ground for socialism--has been a critical...

Published by Thriftbooks.com User , 17 years ago
Americans do a lot of talking about their world historical destiny but a close look at the video tape shows they are missing some major marbles in the democracy check list, as this old chestnut makes clear. Karl Marx minus his ravings about revolution spent the dog years after 1848 doing class struggle 101 in the labor movement, and the results speak for themselves in the social democracies of most advanced industrial nations, and the lack of results in the USA, now beset with the dismal swindle underway in this land of the brave. Among multiple aspects recounted in this highly instructive history is the ironic way universal suffrage appeared very early in the Americas, but only appeared in the European systems as a result of leftist agitation. That and many other factors might explain the facts of the case to anyone suddenly puzzled at why he is losing his shirt in the botched American system. With the passing of the left it was only a matter of time before the whole pack of thieves came out in force.

Socialism in the American Political System

Published by Thriftbooks.com User , 20 years ago
This ambitious and generally excellent book by two veteran political sociologists seeks to explain why the United States, alone among industrial societies, lacks a significant socialist movement or labor party. According to Seymour Martin Lipset, who currently teaches at George Mason University of Virginia, and Gary Marks of the University of North Carolina, Chapel Hill, they are addressing " a classic question of American historiography." That is an accurate assessment, and the authors tackle it with intelligence, imagination, and useful comparative analysis. In an era of global capitalism triumphant, I suspect that most readers will not be interested in a long, albeit erudite, discussion of why the working-class challenge to industrial capitalism failed in the United States. Nevertheless, I recommend this book because it offers deep insights into American society which go far beyond answering the narrow question presented in the title. Lipset and Marks present three principal reasons for the failure of socialism in the United States. First, that it is "but one instance of the ineffectiveness of third parties in the United States over the last century." Second, socialists and labor unionists "never succeeded in bringing the major union movement, the American Federation of Labor and later the AFL-CIO, to support and independent working-class political party." Third, "immigration created an extremely diverse labor force in which class coherence was undermined by ethnic, racial, and religious identity." Lipset and Marks devote a long, detailed chapter to each reason, and they are the heart of the book, along with the authors' fascinating discussion of the socialists' tendency to battle among themselves over issues of "ideological purity." Rarely has the history of the American labor movement and its political failures been surveyed so effectively.Even general readers will instantly grasp why, as Lipset and Marks put it, the Great Depression "presented the Socialists with their final opportunity to build a viable political party." Especially in the early 1930s, in the authors view, "[r]ampant poverty, mass unemployment, widespread bankruptcies, and the public's general uncertainty about the future gave the Socialists grounds for believing that they could finally create a durable mass movement." That failed to happen and, in 1932, the Socialist candidate for president received only 2.5% of the total popular vote. The authors write: "Socialists were bitterly disappointed by the vote for [Norman] Thomas in 1932." Even in this time of obvious economic crisis, most American voters refused to turn to a third party. One reason certainly was the Socialists' extreme positions. According to Lipset and Marks, "the majority of Socialists stood far to the left in the first years of the Roosevelt administration, sharply attacking the New Deal as state capitalism." President Roosevelt shrewdly adopted "leftist rhetoric," offered "progressive pol

The Exceptionalism of the United States

Published by Thriftbooks.com User , 20 years ago
Seymour Martin Lipset's and Gary Mark's book, It Didn't Happen Here, explores the various reasons why Socialism never became an influence in the United States. They combine an historical perspective looking at events in America with a comparative approach to politics in other countries where Socialism influenced the political life. The book is thorough and well researched and should set an example for an approach to the subject. There are times that it does become repetitive in presenting a point repeatedly and much of the book is not as fascinating as the first and concluding chapters where a whole range of ideas are presented in a more general fashion. This book, though, is ideal for the reader with an interest in comparative politics who desires an in-depth look at left wing politics in connection with unions, immigrants and American exceptionalism (an idea that is in some ways showing a bit of decline as the rest of the world becomes politically more similar to the United States). The intellectual effort getting through this book does eventually pay off.

Thorough analysis of complex subject, tho rather laborious

Published by Thriftbooks.com User , 21 years ago
The authors take on the perennial question of why a strong socialist movement never developed in the United States from virtually every imaginable angle--including American "exceptionalism," our electoral system, American federalism, the nature of unionism in the U.S., persection of leftists, etc. The emphasis here is on thorough--they have obviously reviewed all the major social science thought and research on this issue and added some original thinking of their own. (The footnotes are extensive, if not somewhat overwhelming.) They seem at their best when they approach the issues from the perspectives of political science and history, less so when they attempt sociological or economic explanations or attempt to draw lessons from international comparisons or multivariate analysis. (They frequently make comparisons with the experiences of such nations as Canada, Australia, and New Zealand, which seem to verge on irrelevance in places.) The style of the book is that of a social science textbook--at once both its strength and its weakness, in that the book's theses are well developed but hammered home rather repetitively. The summaries at the end of each chapter are especially useful. The book is something of an effort to read, given the amount of detail offered, but it is a worthwhile and thought-provoking investment of time.

A complex and convincing story

Published by Thriftbooks.com User , 21 years ago
Gary Marks and Seymour Lipset may seem to be taking on an easy mark in their book explaining why socialism never made much headway in the United States. However, they are doing something much broader and more interesting than simply explaining a single failure; instead, they have constructed a theory of American political life that shows (according to them) that socialism NEVER COULD HAVE been successful in the United States. In some ways, it is a pity that this book's title will probably limit its appeal to students of socialism, because it addresses far more.Their thesis has many, many supporting arguments, but the two most important to me seemed to be first, that American political culture is naturally predisposed against collectivism and class warfare. The authors trace this tendency back to 19th-century economic and social conditions, and discuss how it interacted with incoming groups of immigrants. Second, the authors discuss the inability of socialism to offer the most attractive vision of the future to the working class (unlike in Europe, where the unions are all socialist). This failure meant that socialism could never attract a mass base, and as a result was confined to the vocal but numerically insignificant leftist intelligentsia.I did not agree with everything in this book, but I found it extremely thought-provoking and recommend it wholeheartedly.
Copyright © 2020 Thriftbooks.com Terms of Use | Privacy Policy | Do Not Sell My Personal Information | Accessibility Statement
ThriftBooks® and the ThriftBooks® logo are registered trademarks of Thrift Books Global, LLC