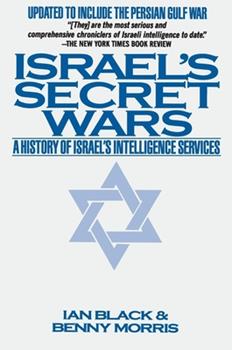 by Ian Black and Benny Morris

One of the events most crucial to the war in the Persian Gulf occurred nearly ten years before it began, when Israel destroyed Iraq's most advanced weapon, the nuclear reactor at Al-Tuweitha, acting on information obtained by Israeli intelligence. Israel's Secret Wars is the first documented, comprehensive history of all three of Israel's intelligence services, from their origins in the 1930s, through Israel's five wars, up to the present, including...

The Dark Side of Statecraft

Published by Thriftbooks.com User , 13 years ago
In Israel's Secret Wars Ian Black and Benny Morris explore the "secret" wars Israel fought against its Arab and Palestinian foes from the pre-state institutions of the Yishuv to 1990. They begin with the earliest manifestations of an intelligence service in the attempts of the Jewish Agency's Arab Department, following the Arab revolt of the 1930s, to keep files on Arab affairs. These note cards stored in a file cabinets became the cornerstone of Israel's espionage industry. With the founding of the state, Black and Morris take us through the evolution of these cards into the Mossad (the equivalent of the CIA) and the Shin Bet (roughly equivalent to the FBI) and their challenges in the Sinai Campaign of 1956, the Six Days War of 1967, occupation of Gaza and the West Bank, the Yom Kippur War of 1973, the struggle against Palestinian terrorism in the 1970s, both in Israel and abroad, and the Intifada in the late 80s. The book is seemingly exhaustive in its use of available sources, is well written and generally non-judgmental, keeping its conclusions close to the "facts." Overall it is the kind of scholarship we have come to expect from a first class historian like Benny Morris.

Published by Thriftbooks.com User , 14 years ago
Comment on its cover: absolutely appealing! Comment on its scope: comprehensive! What makes this book so much more fascinating is the fact that it was screened by the Israeli intelligence community before its release. Based on this fact, one would've assumed that the Israelis would censor huge chunks of information provided in the book. Which makes the historical account from the Israeli viewpoint brutally honest. If it was assassination, they'd call it assassination and take credit for it. One can't help but admire this brutal honesty. You can probably find it in your local library, but this book is something you might want permanently in your bookshelf.

A excellent primer on all things HUMINT and the Middle East

Published by Thriftbooks.com User , 14 years ago
This would be an ideal book if you are an American who needs a crash course in HUMINT and War in the Middle East. In much the same way that David Halberstam and Neil Sheehan were writing by-lines from the Mekong in 1963 urging American military leaders to learn from their French antecedents, I think American military and intelligence officer's would be well served by reviewing this book as a kind of lessons learned manual of the Israeli experience. The chapters which cover the efforts of the Israeli security forces to police the occupied areas, especially Lebanon, are the most relevant today.

A must read for student's of the intelligence industry and it's players.

Published by Thriftbooks.com User , 16 years ago
For students of the history and evolution of intelligence and it's major players, ISRAEL'S SECRET WARS is one of the best comprehensive surveys of the subject available. Messer's. Black and Morris provide a balanced, thoughtfully researched, and well-written account of the complex world of intelligence operations. The concluding points taken are poignant, and pithy. o Israel has consistently been good at human intelligence, the oldest form of spycraft, which remains, despite sophisticated surveillance satellites, computer cryptanalysis and the other vast technological advances of recent years, the best way to find out what an enemy is doing, thinking and planning. o The classic ideological spy, motivated by a belief in the system of his country's enemy, does not exist in the Middle East conflict. There are no closet Arab Zionists, no Syrian, Iraqi, Egyptian or Palestinian Kim Philbys who believe that the transformation of Palestine into Israel, the dispossession and partial exile of an Arab people, is a good and positive thing. o Ingenuity, ruthlessness and dishonesty have played their part in this history, as they have done, and continue to do, to a greater or lesser degree, in the work of all intelligence and security services everywhere. o Israel's secret services have always gone far beyond the traditional tasks of espionage and counter-espionage. Early operational versatility - was carried over {from the British}into the years of independence. o Obtaining weapons and advanced technologies secretly, and often illegally, and denying them to enemies remain a preoccupation. o Using the media to disseminate stories and warnings that help Israeli operations and undermine the country's enemies has long been a speciality.

An Interesting Look At The Intelligence Services of Israel!

Published by Thriftbooks.com User , 21 years ago
This was a very interesting book. It gave a good background ans history of the intelligence services that serve Israel. You have to remember that Israel's very existance depends upon them having an above average intelligence machine. The Intelligence network of Israel have been acclaimed the best in the world.This book besides describing the intelligence services also tell of some of the operation that have been launched by these services. This book describes how the Israel intelligence services provided the location of all aircraft of the Arab world allowing the Israelis to destroy the aircraft of the Arab world and turn the six day war into a rout. The book also details the Israeli services gaining revenge on the terrorists who were responsible for the murder of the Israeli Olympic team during the 1972 olympics. There is also a section about the kidnapping of Adolph Eichmann(the man in charge of the Final Solution) from Argentina. Especially interesting was the bombing of the Iraqui nuclear reactor that was made possible by Israeli intelligence. This book contains some very interesting reading about the accomplishments of Israeli Intelligence. This is an outstanding book that I certainly enjoyed.
Copyright © 2020 Thriftbooks.com Terms of Use | Privacy Policy | Do Not Sell My Personal Information | Accessibility Statement
ThriftBooks® and the ThriftBooks® logo are registered trademarks of Thrift Books Global, LLC