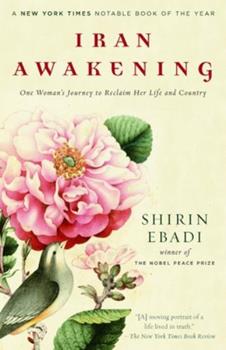 Iran Awakening: One Woman's Journey to Reclaim Her Life and Country

by Shirin Ebadi and Azadeh Moaveni

A NEW YORK TIMES NOTABLE BOOK - The moving, inspiring memoir of one of the great women of our times, Shirin Ebadi, winner of the 2003 Nobel Peace Prize and advocate for the oppressed, whose spirit has remained strong in the face of political persecution and despite the challenges she has faced raising a family while pursuing her work. Best known in this country as the lawyer working tirelessly on behalf of Canadian photojournalist, Zara Kazemi--raped,...

Published by Thriftbooks.com User , 14 years ago
A woman of faith and conviction, with a stubborn determination to adhere to her principles of justice and fairness, Shirin Ebadi sets forth a boldly narrated memoir. Bold in blatantly ignoring likely repercussions by her enemies and their threats of assassination. Beginning with her childhood years during the reign and fall of Mohammad Mossadegh - Prime Minister of Iran, 1951 to 1953 - Ebadi recounts her life primarily in relation to the various changes in the Iranian political scene, from the once powerful, then deposed, Shahs of Iran, to the suppressing reign of the Ayatollah Khomeini and the Islamic Revolution in 1979, and finally to the democratic leader, Mohammad Khatami, who was elected president in 1957 and again in 2001. Ebadi, brilliant, and a self described intellectual, studied law and practiced as a judge during a more politically lenient period of Iran's history. Under the Ayatollah Khomeini, a female judge was relegated to menial clerk positions, power removed. Ebadi never faltered in her fight to attain and maintain justice for all who were oppressed or unjustly accused, male or female, not even during her brief period of imprisonment. Although Ebadi notes in her epilogue that "it is not a political memoir," one can hardly separate her life, after reading the memoir, from politics - politics not only in Iran but politics world wide as it affects Iran and its people. She has not, as she said, "attempted to offer a political analysis of how and why certain events came to pass," but through mere "factual" statements, one can detect a political intent or meaning. And what does one make of these, her words: "Now you are watching faded video footage of Donald Rumsfeld shaking Saddam Hussein's hand, smiling at the butcher who made our capital's cemetery a city. Now you are listening to President George W. Bush promise he wants to bring democracy to the Middle East. You are hearing him address the Iranian people in his State of Union address, telling them that if they stand for their own liberty, America will stand with them. Do you believe him?" Such questions, by their provocative nature, may be as overtly political as any blanket assessment. But at least it provokes thought. The ending chapter of the memoir is devoted to the highest honor achieved by Ebadi - the touted Nobel Peace Prize. Many Nobel Peace Prize choices are steeped in controversy and dissenting opinions. Ebadi's case is no different. Regardless, there is no doubt about the positive elements of Ebadi's moral convictions, and of the sincerity and strength of her aggressive actions in her pursuit of justice for all. If those are the prerequisites for a Nobel Peace Laureate, then justice is served here, too.

An excellent and honest if horrifying picture of today's Iran.

Published by Thriftbooks.com User , 14 years ago
An excellent and honest if horrifying picture of today's Iran. I found Ms. Ebadi's book as fascinating as Hillary Clinton's. An extremely smart and brave woman, Ms. Ebadi clearly loves her country and is ready to sacrifice her life for Iran. I was happy to read about the few improvements in the lives of ordinary citizens as well as changes in women's education in the Islamic republic, but it pained me to read about the human rights violations, the killings, and the tortures used by the mullahs on their own people. I spent 7 years in Iran before, during and after the revolution and left when Iraq threatened to bobmb Tehran. I loved Iran, its ancient history, beautiful poetry, and lovely countryside. But most of all I loved its friendly, hospitable, and talented people and to read that the nation's suffering wasn't over was very hard for me. However, it made me happy and proud to know that Iran, once more, produced a gem, and this time it was a woman, who despite the terror of the Islamic republic was able to make her voice heard in the world and received a Nobel price!

Published by Thriftbooks.com User , 14 years ago
This is probably the best book that I have read this year. Shirin Ebadi tells of her brave defense of human rights in post-revoluationary Iran. Although she is a widely respected, famous Noble Peace Prize winner, she shows humility throughout. I also enjoyed reading her opinions on Iranian leaders, past and present. Highly recommended!

Published by Thriftbooks.com User , 15 years ago
Very accurate description of daily lives in Iran, I'm very pleased that finally someone -and who could be better than Ebadi- wrote a book explaining the strange phase Iranian people went through in the past half a century. I specially enjoyed the parts where she explains the gradual enforcement of Hejab (women's dresscode), and the gradual fading of women's rights in the Religious regime. I've recommended this book to all my friends. For anyone who is interested on the subject, this is as close as one can get to how it feels to really live in Iran. Additionally, Ebadi is able to transfer her amazingly strong personality right to the reader. You'll finish the book thinking that you should seriously put up with a lot less s*** than you do, even if it might sometimes be scary to single-handedly stand up for what you believe.

Published by Thriftbooks.com User , 15 years ago
Finally, we learn about Shirin Ebadi's struggles and trials and tribulations from inside Iran. This Nobel Peace Prize Winner candidly discusses her country's realities -- her struggles, her hopes and the importance of US-Iranian dialogue. Shirin Ebadi's story is unique in every way and we learn about the fine line she walks while surviving under the Islamic Republic of Iran. She's daring, brilliant and a trail blazer ... If you liked "Reading Lolita in Tehran" and "Lipstick Jihad" you will be sure to enjoy this book!
Copyright © 2022 Thriftbooks.com Terms of Use | Privacy Policy | Do Not Sell My Personal Information | Accessibility Statement
ThriftBooks® and the ThriftBooks® logo are registered trademarks of Thrift Books Global, LLC