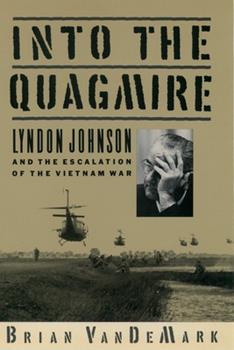 Into the Quagmire: Lyndon Johnson and the Escalation of the Vietnam War

In November of 1964, as Lyndon Johnson celebrated his landslide victory over Barry Goldwater, the government of South Vietnam lay in a shambles. Ambassador Maxwell Taylor described it as a country beset by "chronic factionalism, civilian-military suspicion and distrust, absence of national spirit and motivation, lack of cohesion in the social structure, lack of experience in the conduct of government." Virtually no one in the Johnson Administration...

Review of Into the Quagmire

Published by Thriftbooks.com User , 21 years ago
Very often the American public has tended to view Lyndon Johnosn as the evil villian who escalated America's involvement in the warr in Vietnam. However, few people, including historians, know how the escalation came about. In this book Brian VanDeMark does not try to justify the decisions that were made between 1964 and 1968, but tries and explain how those decisions came about. VanDeMark also shows how Johnson slowly and reluctantly led the United States deeper into what has often been called the "quagmire" of Vietnam. VanDeMark balmes the American Policy maker's ignorance of the culture and politics of Southeast Asia for the slow deepening of the conflict. VanDeMark gives teh reader a very good view of how this happened by carrying the reader through almost every major decision made by the Johnson administration throughout this time period. Writen in a very readable style the near day-to-day account helps to emphasize the snowball effect of the events. The author uses a good range of source material for this book. THere is a strong reliance on government manuscripts and primary sources of the administration. He also includes oral histories and interviews. It is by using these sources and many quotations that VanDeMark is able to carry the reader through the day-to-day accounts of what happened. This book is very important for anyone interested in the VIetnam war or American foreign policy.
Trustpilot
Copyright © 2022 Thriftbooks.com Terms of Use | Privacy Policy | Do Not Sell or Share My Personal Information | Accessibility Statement
ThriftBooks® and the ThriftBooks® logo are registered trademarks of Thrift Books Global, LLC