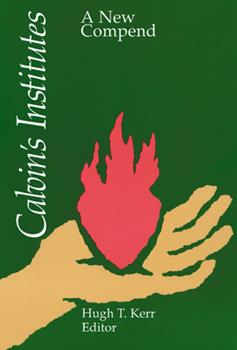 This new and concise abridgement of Ford Lewis Battle's Calvin: Institutes of the Christian Religion is an easy-to-read introductory overview that will better acquaint the reader with Calvin. Consisting of thoughtfully chosen selections, this condensed edition of the Institutes helps fulfill the contemporary demand of scholars, ministers, students, and other persons who desire authentic texts of a relgious and cultural tradition.

Published by Thriftbooks.com User , 14 years ago
Shepherd's Notes on Calvin's Institutes of the Christian Religion is a condensed summary of John Calvin's two volume work. For a layman who may not have the time nor the inclination to purchase and enjoy the theolocical logic of John Calvin and his musings on the depths of Almighty God's magnificent designs for mankind this is a "godsend" if you will excuse the pun. One doctrine that comes across loud and clear is the total depravity of man which in relief shows the awesome character and love God has for his creatures. Ron Houser

Published by Thriftbooks.com User , 21 years ago
This is the hard core of the much longer Institutes. The translation of the title is slightly different than the Ford Lewis Battles full-bore 2-Vol. set, which goes by "Institutes of The Christian Religion." Perhaps that's refreshing for hard-core students of the Battles version.I was describing this abridgement to a friend as "pretty much the core of the 15% to 20% of what's left of the Insitutes when when you cut out all Calvin's footnotes ranting against the Catholics and accusing his foes of being dogs returning to their vomit." The friend's reply: "But those are the best parts." However, for those readers who would be put off by the hand-to-hand combat found in Calvin's profusion of footnotes (or more properly, in Dr. Battles's vast multiplication of explanatory footnotes), this volume is helpful. Here we have simply Calvin cut loose from his scholastic bickering conflicts.It only seems less Calvinistic to read through this so easily.

Published by Thriftbooks.com User , 23 years ago
There's so much here, it's difficult to write a review of it. Perhaps my main recommendation of this book is that it presents such a clear, organized outline of the "basics" of the Christian faith. Regardless of one's position on the man or his theology, one cannot escape the fact that this man's faith was obviously vital to him, and he passionately describes his beliefs in these volumes.Reading Calvin's Institutes was, for me, quite valuable in finally being able to separate John Calvin and his theology from later "Calvinism" that followed, including some of its excesses. I found John Calvin's Institutes to be a balanced, easily understood outline of biblical Christianity. My final commendation would address the organization of the work. The fact that Calvin has provided the reader with a clear outline and direction in his writing, and addressed each point of his outline in concise, manageable units makes the reading of this immense work much more approachable; the brief readings on each topic, with the saturation of biblical references throughout, makes the reading of the Institutes almost a devotional experience.
Trustpilot
Copyright © 2022 Thriftbooks.com Terms of Use | Privacy Policy | Do Not Sell or Share My Personal Information | Accessibility Statement
ThriftBooks® and the ThriftBooks® logo are registered trademarks of Thrift Books Global, LLC