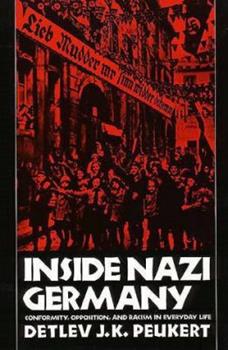 Inside Nazi Germany: Conformity, Opposition, and Racism in Everyday Life

In this remarkable social history of the Third Reich, Detlev J. K. Peukert surveys how ordinary citizens evaded or accepted Nazi policies of repression, terrorism, and racism. Peukert discusses not only the popular consensus that supported Nazism but also the opposition of the German middle class, working class, and youth. "A highly original and informative synthesis of the most exciting new scholarship on Nazi Germany. It gives an intimate insight...

How did German social groups react to the Reich?

Published by Thriftbooks.com User , 20 years ago
The main emphasis of this book is on German social groups and classes and their behavior in Nazi Germany. Peukert looks at the working and middle classes, as well as the youth, and shows how each choose to conform or resist to authority. The youth, we are told, resisted actively by banding together in small groups to resist the Hitler Jugend and passively by listening to forbidden music. Working class organizations resisted in small ways but were generally unable to offer any real challenge to the Nazis. The book's second half looks at Nazi terror and racialism. Peukert explains how much of Nazi ideology was in fact borrowed from 19th Century sources. He also argues that the Third Reich broke up traditional social networks, thereby 'atomizing' every German. My one major fault with this book is that pivotal events such as the seizure of power in 33, the Rohm purge and the Kristalnacht are referred to only in passing. I know the author did not intend to write a general history by any means, but such fascinating events should not be thought unimportant by any researcher of Nazi Germany

Published by Thriftbooks.com User , 21 years ago
While this book isn't as revealing as it's title would suggest, it's a worthy contribution to the vast amount of literature on the subject. It makes good use of primary sources to illuminate the era, though the author often quotes these at excessive length. Some of the revelations surprised me, like the amount of juvenile resistance to Hitler that took the form of listening to "decadent" forms of music like Jazz. It's admirable in it's lack of willingness to point the finger at anyone for the existence of Nazism and level-headed in it's conclusions about the amount of continuity between the "Third Reich" and it's predecessors and successors in Germany. Sometimes the sobreity of it's tone can be grating, but there's enough fascinating details to keep you reading.
Trustpilot
Copyright © 2022 Thriftbooks.com Terms of Use | Privacy Policy | Do Not Sell or Share My Personal Information | Accessibility Statement
ThriftBooks® and the ThriftBooks® logo are registered trademarks of Thrift Books Global, LLC