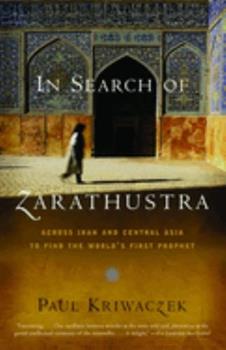 In Search of Zarathustra: Across Iran and Central Asia to Find the World's First Prophet

Long before the first Hebrew temple, before the birth of Christ or the mission of Muhammad, there lived in Persia a prophet to whom we owe the ideas of a single god, the cosmic struggle between good and evil, and the Apocalypse. His name was Zarathustra, and his teachings eventually held sway from the Indus to the Nile and spread as far as Britain. Following Zarathustra's elusive trail back through time and across the Islamic, Christian, and Jewish...

Published by Thriftbooks.com User , 13 years ago
This is informative because the writer has taken a lot of time to investigate any traces of Zorasterism left in Central Asia. You learn more about what has influenced the people in Afghanistan and Iraq, and how their ancient history is still there despite the iron hands of the Muslim leaders. You go back through history with vivid imagery while getting a different perspective than most western history books will give. Easy read, and share it with an intelligent friend.

From Nietzsche to Zarathustra

Published by Thriftbooks.com User , 15 years ago
The ancient Persian prophet Zoroaster taught that the world was caught in a struggle between good and evil. He believed in one God, called Ahura Mazda, in a struggle with the forces of darkness. He was a theological monist and an ethical dualist. Human beings had the responsibility of working to bring about the good and eliminate the evil. The good would triumph in the end. Zoroaster was one of the first religious teachers to preach the afterlife. He founded a religion called Zoroastrianism which remains one of the fundamental religions of man and, although it has relatively few adherents, it survives today. Paul Kriwaczek has written a fine book which is travelog, political commentary, history, and study of Zoroastrianism all rolled into one. Mr. Kriwaczek was trained as a dentist but subsequently joined BBC as a specialist in Central and South Asian affairs. It is good to see a nonspecialist who can write on Zoroaster with enthusiasm and knowledge and convey something of both to his readers. The book is written in the form of a reverse chronology beginning with the present-day and progressing through successive chapters to the hazy early days (perhaps 1800 B.C.) of Zarathustra himself. We see many interesting figures along the way, and Kriwaczek is full of entertaining stories and digressions. This mostly makes the book a pleasure to read, but there are moments when the organization becomes confusing and the story gets a bit off track. Kriwaczek spends a great deal of time on Frederich Nietzsche and his famous work "Thus Spake Zarathustra." He explains well the sources of Nietzsche's fascination with the ancient Persian prophet and he discusses the advances in scholarship contemporary with Nietzsche that helped make Zoroaster accessible. The book continues with a mixture of travel, history, and philosophy through a discussion of the Albegensians, the religion of Mani, Mithraism, Cyrus the Great, and the Jews during the period of the Babylonian Exile and the Second Temple. There are outstanding color photograhps illustrating the places and sites discussed in the book. Kriwazeck's treatments make no pretense of being scholarly or complete. But they are, on the whole, eloquent and thought-provoking. I enjoyed particularly the discussion of Mani, a reformer of Zorastrianism who gave his name to Manicheanism. Kriwazeck's account is based in part upon a recent novel, "The Gardens of Light" by the Lebanese author, Amin Maalouf. Kriwazeck concludes that Zoroaster continues to have a great deal to teach. He sees Zoroaster has a predecessor of the "American religion" or "universal religion" (pp. 227-228) which emphasizes ecumenisism and toleration in a large society composed of individuals from diverse backrounds. Kriwazeck writes (p.228) that the Universal religion: "comprises a belief in good and evil, angels, the devil, heaven and hell, the coming of a Messiah, and an eventual end of the world. These are beliefs with which Jews, Christians and

Published by Thriftbooks.com User , 17 years ago
Lots of good reasons to read, including the fact that it's well-written and highly entertaining and very informative. I guarantee you'll learn a lot of things you didn't know and you'll be glad you did.

Know what it is

Published by Thriftbooks.com User , 17 years ago
This is a lovely little book tracing the influence and mythology of Zarathustra (Zoroaster) through time. Paul Kriwaczek quickly covers Nietzsche, the Cathars, the Manichees, the Roman cult of Mithras, and Zoroastrianism. More accurate and careful books have been written on each of those subjects, but none more enjoyable; and I'm sure this is the only time they have all been dealt with in a single book. Kriwaczek is an honest layman, enjoying himself as he travels across Central Asia, the Middle East and England, reading the works of scholars (and a novelist) and drawing his own conclusions, exploring the legacy of Zarathustra. He explores some of the most fascinating issues in the history of religion, and he entertains the reader with his description of modern rituals. This is not scholarly, academic history, and Kriwaczek admits it. But it's also not the kind of ridiculous stuff you find on the History Channel. Kriwaczek's several speculations are within the bounds of plausibility, and he most of the time he admits when he's speculating. I highly recommend this book because it is so entertaining and fairly accurate. If you wonder why people study ancient religions that no one believes in today, read this and you will know why. However, if you want to read a book about Zoroastrians, I highly recommend Mary Boyce's "Zoroastrians: Their Religious Beliefs and Practices." Finally, in case you wondered, this is exactly the same book as Kriwaczek's "In Search of Zarathustra: The First Prophet and the Ideas That Changed the World."

Very good, but a bit skinny on Zoroastrianim per se

Published by Thriftbooks.com User , 18 years ago
I purchased the book with the anticipation that I would learn more about Zoroastrianism and its practice. Instead, I found an engaging and well written book that disucsses the legacy of that ancient religion on Judiaism, Christianity and Islam. I also discovered quite a bit about pre-Islamic Persia.Kriwaczek does a masterful job of detalining the shadows of Zarathustra's teachings in the present, and the tremendous debt world civilization owes to Zoroastrianism as a belief system: for example, the concept of "good" vs. "evil" in a cosmic battle for universal supremacy; or the idea of a paradise in the "hereafter"; even angels and demons are remnants of the old Persian religion. Its simply a wonderful read, and gives one a deeper understanding of the Near East in general and Iran specifically.
Trustpilot
Copyright © 2022 Thriftbooks.com Terms of Use | Privacy Policy | Do Not Sell or Share My Personal Information | Accessibility Statement
ThriftBooks® and the ThriftBooks® logo are registered trademarks of Thrift Books Global, LLC