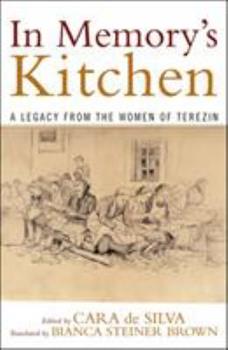 In Memory's Kitchen: A Legacy from the Women of Terezin

The sheets of paper are as brittle as fallen leaves; the faltering handwriting changes from page to page; the words, a faded brown, are almost indecipherable. The pages are filled with recipes. Each... This description may be from another edition of this product.

A testament to strength and work of love

Published by Thriftbooks.com User , 15 years ago
I first learned of this book when it was initially published and a small article about it was carried in The Parade Magazine appearing in The Boston Sunday Globe. What caught my eye was a recipe for roast goose (a weakness of mine) and then I read the accompanying piece -- I was moved to tears and tore out the recipe and placed it on my refridgerator under a magnet. A few months later, I was preparing New Year's Day dinner -- I got up at 5am to boil chestnuts for the stuffing ... and cursed my hangover as I was peeling the shells off and cutting up apples ... I followed the recipe and made the most delicious roast goose I have ever eaten ... and have cherished this recipe ever since. Then I had to search for the book -- and it is now one of my most favorite cookbooks. I use the recipes often and each time I turn to the book, I think of the women who passed on these gems ... it gives me great pleasure to know that they live on and remembered every time I cook ... I think it would make them smile to know that their history continues and I am teaching my daughters about their history as I teach them to cook. There is something wonderfully cyclical in that knowledge ... and it brings a smile to my lips as I watch my daughters stir and taste and know that they will teach their daughters in this same way.

Published by Thriftbooks.com User , 15 years ago
This book is a unique combination of scholarship, history, and memory. Although it contains recipes, this is not in any traditional way a cookbook. In Memory's Kitchen is the moving story of how during World War II the women of the Terezin concentration camp spent evenings writing down recipes that reminded them of their previous 'real' lives: when they lived with and cooked for families and friends. They substituted memory for food and in doing so kept their humanity alive. The 'recipes' were smuggled out of the camp and years later found their way to the surviving daughter of one of the 'cooks.' Definitely worth reading.

Published by Thriftbooks.com User , 15 years ago
This deeply moving book doesn't pretend to be either a history, or a cookbook. A previously unknown kind of Holocaust literature, it presents itself, as its title implies, as a form of memoir, with all the flaws (inaccuracy being chief among them) and virtues (a vivid evocation of states of mind) of the genre. And there isn't a more telling example of the ravages of the Nazi death camps than the fact that these hungry, terrorized women of Terezin could not remember accurately recipes they had prepared countless times in their lives. Nor is there a more poignant witness to the indomitability of the human spirit than the determination of these women, as they confronted annihilation, to preserve some part of their culture, their memories of the past, their dreams of the future, by writing these recipes down. What a testimony that was to the power of food to nourish the soul as well as the body, and to the force of hope, for defying logic and experience they believed this "cookbook" might survive. That it did is a gift to us all.

Some people don't get it, do they?

Published by Thriftbooks.com User , 17 years ago
To the reviewer who thinks this book is worthless as a historical document and a lousy cookbook: you're missing the point completely. This book moved me to tears-- in my family recipes passed down from mother to daughter are our memory and our inheritance. The women who dictated these recipes probably didn't get that chance, and that this book survived is amazing.

Published by Thriftbooks.com User , 19 years ago
This book is a testimony to the towering reaches of the human spirit. In the midst of the horrors of Terezin, surrounded by suffering, deprivation, and death, hungry women recorded recipes of warmth, comfort, and abundance. They remembered cooking delicious meals, serving delicacies and caviar, making aspic, cooking many varieties of dumplings. The hand-written cookbook they put together demonstrates that although the Nazis held their bodies captive, their spirits remained free, drawing strength and nourishment from their memories of happy days and fully-laden tables. Despite the wretched conditions of the camp, these women dared to hope for a time when they could return to their kitchens and once again rejoice in feeding their families. This haunting book will bless your life.
Trustpilot
Copyright © 2022 Thriftbooks.com Terms of Use | Privacy Policy | Do Not Sell My Personal Information | Accessibility Statement
ThriftBooks® and the ThriftBooks® logo are registered trademarks of Thrift Books Global, LLC