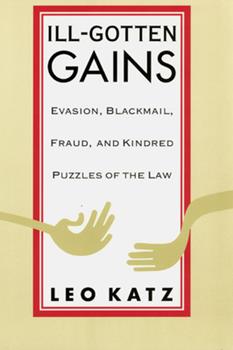 In Ill-Gotten Gains, Leo Katz describes the underlying principles that not only guide the law but also moral decisions. Mixing wit with insight, anecdotes with analysis, Katz uncovers what is really at stake in crimes such as insider trading, blackmail, and plagiarism. With its startling conclusions and myriad twists, this book will fascinate all those intrigued by the perplexing relationship between morality and law. An ambitious and well-written...

Published by Thriftbooks.com User , 21 years ago
I'm turning into quite a fan of Leo Katz. I was so impressed by his _Bad Acts and Guilty Minds_ that I picked this one up almost at once. And it's just as good.This time around, Katz's plan is to deal with what he calls "three related mysteries": the moral problem of "avoision" (i.e., what counts as morally bad evasion and what merely as legitimate avoidance); the moral nature of e.g. blackmail and insider trading (i.e., what, if anything, justifies our all but universal moral intuitions that these and other similar acts are genuinely wrong); and the problem of "undeserved glory" (and what's wrong with appropriating someone else's fame).I won't try to spell out Katz's examples and arguments under each of these headings, for I could not do so if I tried: his discussions are very well organized, but they pass from one subtopic to another with such rapidity and ease that I would have a hard time deciding just what to select. In general I shall say only that even where I disagree with him (as I sometimes do), his lively and provocative analysis is a sheer joy to read.His most prominent theme is also one of which I heartily approve. There are some lawyers, philosophers, and especially economists who think it is possible to be both a libertarian and a utilitarian. Katz forcefully disagrees (as do I). And one purpose of this volume is to hammer that point home.Himself apparently a libertarian, Katz argues repeatedly and at length that libertarianism requires a deontological foundation; utilitarianism is simply inadequate in every respect. Along the way he also mounts a striking _deontological_ defense of the role of the attorney (in helping clients to avoid malignant moral outrages by "capitalizing on the deontological properties of legal rules," p. 131; you'll have to read the book to find out just what this means). And in one brief passage that one could wish were longer, he follows Amartya Sen to a striking conclusion: libertarianism is _also_ incompatible with complete freedom of contract. As in his earlier book, Katz's own outlook seems to be a sort of self-critical intuitionism along the lines of Judith Jarvis Thomson (whose "trolley problem" also gets a further workout here).I wrote in my review of Katz's previous book that it was all but unique. I am happy to say that isn't entirely so; this book is a lot like it. Highly recommended.
Trustpilot
Copyright © 2022 Thriftbooks.com Terms of Use | Privacy Policy | Do Not Sell or Share My Personal Information | Accessibility Statement
ThriftBooks® and the ThriftBooks® logo are registered trademarks of Thrift Books Global, LLC