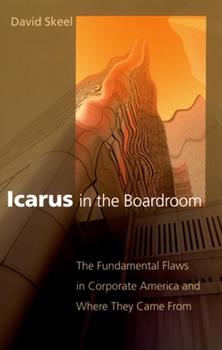 Icarus in the Boardroom: The Fundamental Flaws in Corporate America and Where They Came from

by David A. Skeel Jr.

Americans have always loved risktakers. Like the Icarus of ancient Greek lore, however, even the most talented entrepreneurs can overstep their bounds. All too often, the very qualities that make Icaran executives special-- self-confidence, visionary insight, and extreme competitiveness--spurthem to take misguided and even illegal chances. The Icaran failure of an ordinary entrepreneur isn't headline news. But put Icarus in the corporate boardroom...

I like this book b/c it is easy to read and useful!

Published by Thriftbooks.com User , 17 years ago
as one of the students of D Skeel's basic corporation's class, this book is one of our reading assignments. Generally speaking, I hate reading assignment but I do like this book. as a foreign LLM, I always find those JD peers "know" more than me about those names like "Jay Cookie", "Masha Steward","Enron case" or "Milken and takeover". Iracus actually helps me to catch up a little bit. It at least is a great book concerning the Amercian Corporate history. I perfer it to be a light reading before going to bed b/c it is short, easy to read for a foreigner and D S tends to amuze his readers rather than torture them. As for the scandal part, I think the three prong conclusion is a great idea b/c it does fit the history lesson neatly. I think it is a great book for both legal and non legal ppl who are interested in this book. Anyway, as DS says in his book, "nowadays, Corporation is us."

Three Growing Risks and How to Address Them

Published by Thriftbooks.com User , 17 years ago
America loves risk-taking CEOs, but when such behavior crosses over to boardrooms it could have massive consequences because of the growing scale of businesses and society's greater dependence on equity markets. Icarus in the Boardroom: The Fundamental Flaws in Corporate America and Where They Came From, by David Skeel draws on Greek mythology to present a candid warning aimed at corporate directors and anyone concerned with our economic future. Trapped in a labyrinth of his on construction, Dedalus made wings for himself and his son Icarus. He warned Icarus not to fly to close to the sun but Icarus got carried away, failed to heed the warning, and plunged to his death after the sun melted the wax that held his wings together. Similarly, the corporation is a powerful human innovation, but is dangerous if not used properly. But this book isn't about businesses being "socially responsible," in the normal sense of health, peace, or global warming. Instead, Skeel is concerned with the impact that corporate failures can have on the economy as a whole. From that standpoint, Icarus in the Boardroom offers excellent advice on creating a sustainable business climate, getting to the source of problems instead of the symptoms. He attributes several recessions and the Great Depressions to an "Icarus Effect," brought on by three factors: Excessive and sometimes fraudulent risks Competition (or, rather, tendencies toward monopoly) Increasing size and complexity The bulk of the book is devoted to a short history of the corporation followed by an excellent treatment of these three thematic factors and corporate failures though US history. He explains how government has responded to Icarus effects and how corporations have worked to first adapt, then often to circumvent or unravel government's attempt to save us from corporate excesses. In general, "the lobbying might of corporate managers, and the power of their political contributions, is too great for even relatively minor reform to succeed," he notes. However, the wake of financial scandals provides an opportunity to "change the political calculus." We witnessed such changes after the 1929 crash when reforms like creating the Securities and Exchange Commission stopped short of federalizing corporate law. More recently we enacted Sarbanes-Oxley to address the scandals of Enron, WorldCom and Tyco. Where did we stop short this time? Skeel advises that we partially addressed fraudulent risk but left the other Icarun factors largely untouched. Among Skeel's many recommendations: Conflicts of interest. Having auditors selected by a committee made up of "independent" board members does little; they'll still be reluctant to choose an auditor who will rock the boat. Stock exchanges should assign and police auditors. Securities analysts. "If exchanges were required to assign a securities analyst to every listed company - and pay the analysts from companies' listing fees - investors would know that there was at

Published by Thriftbooks.com User , 17 years ago
This book is a minor masterpiece of legal/business history. In slightly more than 200 pages, David Skeel tells the story of CEOs who took huge gambles with corporate assets in order to boost profits and share prices. Although the media and public idolize larger-than-life CEOs, Skeel shows how throwing the dice can often result in ruin for corporations and their employees and shareholders. His book ranges from 19th century railroad bankruptcies to the rise and fall of Enron, tying together economic history, financial theory, business law, and the politics of regulation. It's sophisticated but breezily written. I'd give it six stars if I could.

A Superb Book on Corporate Scandals

Published by Thriftbooks.com User , 18 years ago
This ambitious book takes on the "big picture" questions about the recent wave of corporate scandals: the increase in risk taking, the complexity of the modern corporation, and the limitations on shareholder governance. It offers intelligent advice for regulators, and warns average investors about the most extraordinary risks. In my judgment, this book is a must read for anyone who followed the recent scandals. Unlike many of the books written about the markets during the past few years, "Icarus" offers a fresh perspective on what happened and why. To mix a metaphor, I hope it catches fire. Specifically, the book recounts how technological and financial innovation made it so much easier for the 1990s corporate manager to take greater risks and manipulate how investors understood the corporation's business. The book's description of the split between perception and reality will be jarring to any investor. Professor Skeel's writing is accessible and pithy. He lucidly explicates the "Gordian knot of conflicts" in the modern financial enterprise, and even devotes important pages to derivatives and structured finance. But the strongest part of the book is its historical perspective. Today's reportage on the markets frequently ignores important eras, products, or schemes, and rarely understands how financial history repeats itself, or morphs in new and interesting ways. In contrast, this book ties together nearly every financial scandal during the past several centuries: the South Sea Bubble, Cooke, Gould, the Money Trusts, the S & L scandals, Milken, and so on. Of particular interest is Samuel Insull - readers who are not familiar with his schemes will find the material on the "House of Insull" unforgetable. "Icarus" is an important intellectual history, and a riveting read. If only every book on the markets could be this good.

Fascinating analysis of the causes behind corporate failures

Published by Thriftbooks.com User , 18 years ago
University of Pennsylvania law professor David Skeel's Icarus in the Boardroom: The Fundamental Flaws in Corporate America and Where They Came From presents an analysis of corporate scandals and catastrophic failures from the rise of the modern corporation through the present day. Skeel begins by analyzing the underlying causes of what he terms "Icarus Effect" failures, named for the mythological Greek Icarus whose hubris in flying too close to the sun caused his downfall. In Skeel's analysis, Icarus Effect failures occur as a result of three factors -- corporate executives willing to take excessive or fraudulent risks, the pressures of corporate competition, and the increasing size and complexity of the corporation. While not all corporate failures fit this definition, Skeel finds that the Icarus Effect underlies many of the most catastrophic and damaging failures in American business history. Skeel's investigation of corporate malfeasance and business failure covers a wide historical scope, from the birth of the corporation during the 17th century voyages of trade through the exploits of recent figures such as Ken Lay, Bernie Ebbers, and Dennis Kozlowski. Along the way, we meet a number colorful historical characters such as Jay Cooke -- the Philadelphia banker whose scheme for selling government debt helped to finance the Civil War and the growth of the U.S. railroads until his increasing risk-taking caused the collapse of this financial empire in 1873 -- and Samuel Insull -- who established a utilities empire with a complex web of corporate ownership until his overextended, debt-laden empire was brought down during the Depression. The most fascinating aspects of Skeel's historical analysis are the frequent parallels between the catastrophic failures of the past and those in recent headlines. Jay Cooke's dinners with President Grant are reminiscent of the friendly relationship between Present Bush and Enron's Ken Lay. And Samuel Insull's elaborate corporate structuring of his utilities holdings in the first decades of the 20th century are eerily echoed in the complex "off balance sheet" holdings of Enron in the final decade of the century. In the closing sections of Icarus in the Boardroom, Skeel provides a critique of recent attempts to curb corporate misbehavior such as Sarbannes-Oxley, and finds little that he believes is likely to retard the ongoing cat-and-mouse game between legal curbs on corporate behavior and clever techniques for evading them. In the final chapter, Skeel offers a number of his own recommendations for how America can strengthen oversight of corporate behavior. Icarus in the Boardroom is fascinating for both its historical perspective on corporate malfeasance and its analysis of recent headline events.
Trustpilot
Copyright © 2022 Thriftbooks.com Terms of Use | Privacy Policy | Do Not Sell My Personal Information | Cookie Preferences | Accessibility Statement
ThriftBooks® and the ThriftBooks® logo are registered trademarks of Thrift Books Global, LLC