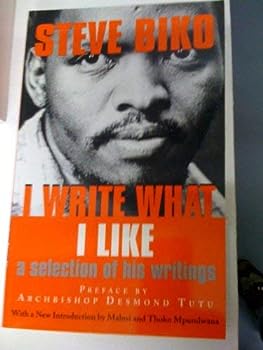 I write what I like: A selection of his writings

The most potent weapon in the hands of the oppressor is the mind of the oppressed. Like all of Steve Biko's writings, those words testify to the passion, courage, and keen insight that made him one of... This description may be from another edition of this product.

I Liked What He Wrote

Published by Thriftbooks.com User , 16 years ago
I enjoyed the book very much. Really gave me a feel for Steven Biko and his brilliance. Also gained some insight into South Africa and its politics during his time. Many of his thoughts are universal and can be applied to the world today. Two thumbs up.

Published by Thriftbooks.com User , 16 years ago
"I Write What I Like" was set on the backdrop of the thankfully defunct system of apartheid, but the parallels to our modern world remain both pertinent and poignant. While activists such as Desmond Tutu and Nelson Mandela fought apartheid on the political and economic front, Steve Biko fought it on the most basic psychological level. He rejected the fundamental premise that made racism and subsequent apartheid possible. The premise he rejected was "that one kind of man was superior to another kind of man". The questions he posed and the answers he gave made him the most dangerous man alive to the white minority government of South Africa. The movement Steve Biko helped found was called "Black Consciousness". Many decried it as a form of afro-centric racism. That characterization could not have been further from the truth. Black Consciousness differed sharply from other anti-apartheid movements in that it advocated the preservation and advancement of black culture from the individual level. Far from being reveres-apartheid, Biko called for blacks to have their own institutions, their own achievements, and preserve their own languages and cultural heritage - not to the exclusion of whites but with a clear assertion that their culture was valid, valuable and should be allowed to thrive and grow. Biko asked the questions that were too hard to answer for their simplicity. "How can one prevent the lose of respect between child and parent when the child is taught by his know-all white tutors to disregard his family teachings? Who can resist losing respect for his tradition when in school his whole cultural background is summed up in one word - barbarism?" Blacks struggling for equality in South Africa were labeled "terrorists" by the white minority government. This fact resonates ominous parallels with America today. As we rush to shred the rights enumerated in our constitution under the euphemistically titled "Patriot Act", we should be wary of this history. Surely people demanding equality for themselves by non-violent means were not terrorists. Yet this is how they were defined. Anti-terrorism laws, without an objective definition of "terrorism", can be turned against anyone the government finds... uncomfortable. Torture is another concept that is being openly discussed these days. The question "would we torture of this reason or that reason?" assumes on some level that torture is effective. Steve Biko had some very important observations on torture, as he was often the subject of it; "If you want to make any progress, the best thing is for us to talk. Don't try any rough stuff, because it won't work." - "If you guys want to do this your way, you have to handcuff me and bind my feet together, so that I can't respond. If you allow me to respond, I'm certainly going to respond. And I'm afraid that you may have to kill me in the process even if it's not your intention." Steve Biko died September 12, 1977. Authorities initially claimed that his

Good primer for a humanitarian revolution

Published by Thriftbooks.com User , 18 years ago
Steve Biko's "I Write What I Like" is an excellent look at ta voice who tried to articulate the struggles of his people and to provide workable solutions. The "Frank Talk" articles and his testimony in the court are highlights, but it is also interesting to read the manifesto of the effects of Christianity on African Religion. Very raw stuff of the Malcolm X school. Overall a very moving and inspiring read. Like Ghandhi and his contemporary Nelson Mandela, Steve Biko's writings are those of a revolutionary with a heart.

A compelling writer on enduring struggle for consciousness

Published by Thriftbooks.com User , 19 years ago
As a clear formulator of a useful, modern, Black Consciousness for South Africans, Biko is unimpeachable - his criticism of liberal whites is fundamentally sound, that a racist system, in its import, taints the actions of everyone who works within the system as racist. Biko is working out the nuts and bolts of his theory of African advancement and affirmation while working on the front lines of the struggle. The intensity of the struggle is captivating, because the risks are great and violence is imminent - but Biko should also be captivating because of what he represents as a modern, critical African intellectual. Criticizing Biko is hard because he was clearly interested, above all, in changing his own people's view of themselves, and re-instilling their necessary sense of self worth. How important to Biko is the cynicism of liberal whites in the present political culture that blacks "may not be doing a good job leading" (xxii)? Is his preferred, future "non-racial" South Africa something that other black leaders sympathize with? I think that we can link his popularity among young blacks inthe apartheid state with a new will to participate in the struggle. Because Biko was so courageous, it is perhaps a hard to get a clear idea of what he saw as the possible end games to the struggle. This book is non-rhetorical and pragmatic, and the fact that Biko's conception of, and motivation of countless blacks in South Africa around, the idea of Black Consciousness make what Biko is talking about here successfully revolutionary. At times blisteringly critical of black church leadrs who he beleive have acquiesced to apartheid, at times bravely courteous, as when he is being tried before a coutroom full of whites and white security officials and he maintains his awesome collectedness and cutting wit as he indites THEM for crimes. Biko is an exciting writer, and his influence on men like Mandela, as well as his model for grassroots political empoerment, make him an important theorist on what can and should happen to make a better future in Arica. His energy and creativity are still highly applicable, even in the new South Africa and beyond in 21st Century Africa.

Published by Thriftbooks.com User , 22 years ago
Steve Biko will always be remembered as one of the most outspoken leaders in South Africa's liberation movement. Martyred at an early age, Biko's refusal to keep silent about apartheid was a thorn in the side of an oppressive and immoral regime. We are privileged to have in our hands a rare collection of Biko's writings spanning from the years 1970 to 1979. They cover a wide variety of topics but the core of each one expresses the ardent desire to throw off the yoke of oppression in its varied forms. Biko gives us a detailed analysis of racism, its impact on Blacks and whites and its destruction of the moral fabric of the society in which it resides. He calls for a Black consciousness where Blacks respect one another and break off the yoke of inferiority. Since his death, the apartheid regime is gone but his words are just as relevent today as they were during his time. Ghosts of the past still haunt South Africa but the spirit of Biko's writings and liefe invoke a sense of hope and pride. Savor this young man's work and allow yourself to be guided by his spirit. This text outlines the philosophical, political and spiritual underpinnings of Steve Biko.
Trustpilot
Copyright © 2022 Thriftbooks.com Terms of Use | Privacy Policy | Do Not Sell or Share My Personal Information | Accessibility Statement
ThriftBooks® and the ThriftBooks® logo are registered trademarks of Thrift Books Global, LLC