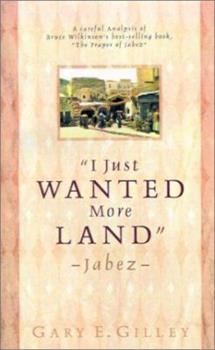 The meteoric rise in popularity of Bruce Wilkinson's compact book, The Prayer of Jabez, has taken the church, and the country, by storm. Having already sold millions of copies, it may become the best-selling Christian book of the last one hundred years. In this book, pastor and author Gary Gilley takes issue with Wilkinson's message. He believes the message, although well-meaning, is unbiblical and threatens to do incalculable damage to the church...

Published by Thriftbooks.com User , 16 years ago
Gary Gilley's book I JUST WANTED MORE LAND exposes the problems of Bruce Wilkinson's mega-popular THE PRAYER OF JABEZ. Gilley shows how the weakness of Wilkinson's book is that Wilkinson does not do a proper biblical exegesis of the passage as found in 1 Chronicles 4:9-10. Gilley shows how a proper understanding of the passage reveals that Jabez was praying for more land and how Wilkinson misuses the text to teach a false prosperity gospel not found in the Bible. The book is a solid resource for disciples that have had a hard time with fad trended church in America. First it was WWJD then came THE PRAYER OF JABEZ and now its Rick Warren and the whole Purpose-Driven fad. Instead of a steady intake of the inerrant Word of God (1 Peter 2:1-3), we are feeding on the popular culture. Gilley stays true to the text and does not allow popular American culture to interpret 1 Chronicles 4:9-10. I highly recommend the book for every serious disciple of Jesus (Luke 14:25-35).

Published by Thriftbooks.com User , 19 years ago
I read Wilkinson's "Prayer of Jabez" with an open mind and absolutely could not believe why such a piece of apostasy was a best seller. But the stock market was running wild in the late 90's, everyone was doing well, so in retrospect, maybe it was not quite a surprise at all.Wilkinson's exposition of four verses from Chronicles was beyond stretching. We may never know the real Jabez's motivation for his prayer. But remember his name means "pain." There are plenty of New Testament references cited by Mr. Gilley that clearly dispute Wilkinson's obnoxious "health and wealth", "name it and claim it" gospel. Jesus also clearly taught against repetitious prayers. C'mon Christians.....see through Wilkinson's garbage. Gilley is right on with his rebutting of Wilkinson's book. With the economy tanking right now, I wonder how many "Jabez" readers are now more than a little disillusioned? Thank you Mr. Gilley for your courage in writing a book that is against the Christian current, but right on !!

I just wanted a good book!

Published by Thriftbooks.com User , 20 years ago
With all the hype out there on "The Prayer of Jabez", it was frustrating not to have a good book on the market that dealt with it from a purely Biblical standpoint. "I Just Wanted More Land" does just that. Gary is concise, readable, and straight to the point in this little book. He uncovers the faulty exegesis behind the book's content, and then does something about it! The second half of the book is worth the price of the whole. Gary gives some basic information on Bible study and interpretation that is vital for the church in our postmodern days. This is a must read for all Christians, especially pastors and other Christian workers. I recommend this book highly.

Must Reading For Those Who Think

Published by Thriftbooks.com User , 20 years ago
If you've read (or even have heard) of the Prayer of Jabez, this book is must reading. Instead of following the crowd, this book carefully examines what the true meaning of Jabez's brief prayer is all about.Although critical reviews may not be popular at this time, this book moves back to a time when misguided application of God's word could be challenged without resorting to vicious personal attacks.Well worth reading if you would like to think deeper about The Prayer of Jabez.

Mine Was Not Intended To Be A Model Prayer

Published by Thriftbooks.com User , 20 years ago
As an example of rightly dividing the Word of Truth, in this little book Gary Gilley exposes the error that so fundamentally flaws Bruce Wilkinson's "The Prayer of Jabez". It is a refreshing analysis of two short verses that were, obviously, only intended to show that Jabez prayed for additional land (nothing more, nothing less) and God granted him that. (There's absolutely nothing there that can be construed to indicate that it should be seen as a "model" prayer that the Christian should follow today.)In the latter part of the book Gilley provides the reader a straight forward 3 step approach for studying the Bible; observation, interpretation, and application. Today, it seems to be so easy to publish and popularize blatant error and to draw undiscerning multitudes to it through a kind of The Emporer's New Clothes mentality. While some adherents to The Prayer of Jabez theme may expect to strongly disagree with Gilley's book, they should try to read it with an open mind and carefully consider whether Wilkinson's book really squares with Scripture.
Trustpilot
Copyright © 2022 Thriftbooks.com Terms of Use | Privacy Policy | Do Not Sell My Personal Information | Accessibility Statement
ThriftBooks® and the ThriftBooks® logo are registered trademarks of Thrift Books Global, LLC