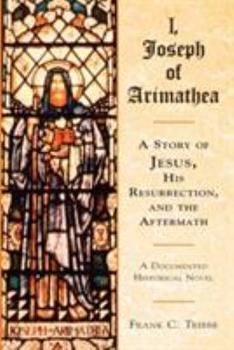 I, Joseph of Arimathea: A Story of Jesus, His Resurrection, and the Aftermath

The Biblical accounts of Jesus' life and the growth of Christianity in the following years leave much to the imagination. Frank Tribbe allows his imagination and serious scholarly research to fill in... This description may be from another edition of this product.

A thought-provoking work of meticulous and literate fiction

Published by Thriftbooks.com User , 21 years ago
In his richly textured historical novel I, Joseph Of Arimathea, author Frank Tribbe presents the story of the rich man from Arimathea named Joseph, a disciple of Jesus, and the person who laid Jesus' body in a tomb of rock following the crucifixion. Here is also related the experiences of the women most closely associated with Jesus and the encounter of those who met the resurrected messiah on the road to Emmaus. This vivid, engaging, highly recommended novel draws upon apocryphal New Testament texts (particularly the Gospel of Nicodemus) to recreate the life of Joseph of Arimathea, Jesus, the various disciples, Lazarus, Pilate, and others. The reader is treated to a fascinating account of the survival and earliest history of the Shroud of Turin; the "lost years" of Jesus before entering his brief public ministry as recorded in the Gospels; Joseph of Arimathea's role with respect to introducing Christianity to Britain and the west (before it reached Rome); as well as details of daily life in the first century, descriptions of travel, plausible reconstructions of ancient business practices, languages, literacy, education, and metallurgy. A unique, entertaining, and thought-provoking work of meticulous and literate fiction.

New insights on Jesus through facts and fiction

Published by Thriftbooks.com User , 22 years ago
For two thousand years Christians and historians have searched for more accurate descriptions of Jesus of Nazareth. Following Gutenberg's printing of the Bible in the 15th century, untold millions have been able to read the four gospels, Mathew,Mark, Luke and John as they seek for the true portrait. Inspiring as the accounts are, nevertheless, these descriptions of Jesus are not identical. While the first three show a fairly similar Jesus as a humble, itinerant preacher and healer walking about the countryside with a group of followers, the gospel of John portrays a majestic, from the beginning of time figure, of the very Son of God. Frank Tribbe, from a lifetime of Bible study and travels to countries significant for early church history, has written a refreshing narrative describing Jesus as he might have been seen through the eyes of Joseph of Arimathea. Tribbe acknowledges that to write his book, he has used fiction adding to the biblical accounts. Building on the friendship of Jesus and Lazarus, he suggests that Lazarus might have been the real author of John's gospel. Tribbe's precise details of Herod's scourging of Jesus and the final hours of the crucifixion are heart-rending. Tribbe is known for his devoted years of research to the shround of Turin, the garment provided by Joseph of Arimatha for wrapping the body of Jesus for burial. Far from just a book of fiction, I, Joseph of Arimathea builds on known data to give a moving account of Jesus of Nazareth and the earliest days of Christian history.
Trustpilot
Copyright © 2022 Thriftbooks.com Terms of Use | Privacy Policy | Do Not Sell or Share My Personal Information | Accessibility Statement
ThriftBooks® and the ThriftBooks® logo are registered trademarks of Thrift Books Global, LLC