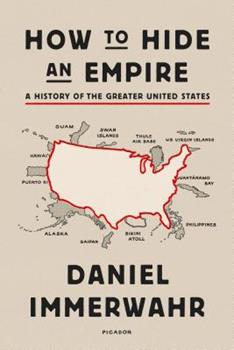 How to Hide an Empire: A History of the Greater United States

Named one of the ten best books of the year by the Chicago TribuneA Publishers Weekly best book of 2019 - A 2019 NPR Staff PickA pathbreaking history of the United States' overseas possessions and the true meaning of its empireWe are familiar with maps that outline all fifty states. And we are also familiar with the idea that the United States is an "empire," exercising power around the world. But what about the actual territories--the islands, atolls,...

Published by Walter Ko , 7 months ago
Prof. Immerwahr wrote this documentary on the Great American Empire from Daniel Boone. It is empire history 101 up to the present. American citizens are not aware of the American Empire status, only to find out on the Beijing Winter Athletes marching in the opening ceremony. In addition to the American Main Land team, groups from Puerto Rico, American Samoa and US Virgin Island marched on with their own flags. Professor pointed out they are under American Empire! He elaborated in much details in the Philippines, Cuba and other places that reader does not learn from American curriculum. The politicians now deviate from the American spirit and principles after taking over the British Empire after WW II. With the collapse of Soviet Union, American celebrates the triumphant in the mood of the end of history. With Trump came to the White House, he demanded government officials loyal to him not the Constitution. He put democracy into plutocracy into his own Empire. He waged trade war with China with a cold war mentality for a future war with a civilized state of four thousand years. Now America goes to second term of gerontocracy, with high China tariffs, inflation, crime rate, Covid-19 death toll, anxiety. With the deployment retreat in twenty years of American democracy from Afghanistan , known as the grave of Russian Empire and British Empire, American suffered loss of respect, prestige and dignity. Will the Great American Empire suffer the same fate as their Royal cousins?
Trustpilot
Copyright © 2022 Thriftbooks.com Terms of Use | Privacy Policy | Do Not Sell or Share My Personal Information | Accessibility Statement
ThriftBooks® and the ThriftBooks® logo are registered trademarks of Thrift Books Global, LLC