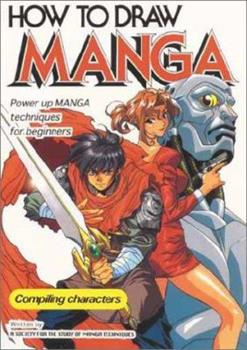 (Book #1 in the How To Draw Manga Series)

This is an authentic instructional book aimed at the advancement of magna and prepared by a group of assistant to popular magna artist Yu Kinutani. Volume one begins with the use of drawing utensils and covers character faces, full bodies, arms. lets, hair and more. The instructions are presented in an easy-to-understand block method.

We receive 20 copies every 6 months.

Published by Thriftbooks.com User , 13 years ago
Purchased it at Barnes and Nobles for $15.00, was not in stock here. This is the first book in the series. I have purchased the first 10 books along with tons of art supplies for a relative. He will be busy the rest of the year!!!

Published by Thriftbooks.com User , 16 years ago
I don't have the book but my best friend does and she shares it with me. You should see my before and after pictures! She normally points out errors to me,now once in a while i can point out some errors for her. I used to do "tomato" heads as ahe would call them,(just plain circles) but since i've read through the book I've gotten much better.I've learned how to position the head just right, i learned that the body is half the size of the legs, a chibi is 3-4 heads high,an adult is 7-8heads high,etc... This book is a great help for beginers and vetran drawers that want to renew their skills. since it comes in a series it will progress as you progress and help you along the way.You don't need to be an Anime and Manga geek like me and my friends to draw this different and very Unique style of art.

A great addition to "How to Draw Maga: getting startted"

Published by Thriftbooks.com User , 18 years ago
While "Getting Started" deals with the very basic aspects of How to Draw Manga, This book in the series seems to extend beyond the very basics and gets more in depth with the aspects of Drawing, character creation, and the elements of making a Manga comic.Though as an afterthought, this book, "How to Draw manga: Compiling Characters" could probably replace "Getting Started", as it does cover just about the same topics, in fuller detail. So if you don't feel like spending the $20 some odd dollars on "Getting Started", this one can easily take its place. but it certainly doesn't hurt to get both

Published by Thriftbooks.com User , 18 years ago
Excellent book, shows how to draw using blocks and lines.Mostly very easy to understand, with cute little characters showing you what to do ^_^Also showed some Japanese words and there meanings.This book had 2 or 3 wrong translations but was overall a really good book ^^

Published by Thriftbooks.com User , 18 years ago
This particular book of the "How to Draw Manga" series helped me a lot when I was starting out. I think this is one of the best books they've written and frankly I hope it helps others as much as it has helped me.
Copyright © 2020 Thriftbooks.com Terms of Use | Privacy Policy | Do Not Sell My Personal Information | Accessibility Statement
ThriftBooks® and the ThriftBooks® logo are registered trademarks of Thrift Books Global, LLC