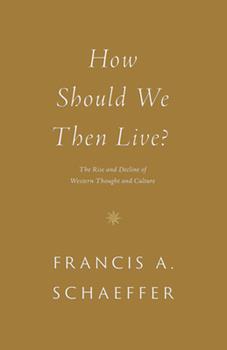 How Should We Then Live?: The Rise and Decline of Western Thought and Culture

by Francis A. Schaeffer

Francis Schaeffer's Classic Analysis of the Rise and Decline of Western Thought and Culture Civilizations throughout history have built societies around their own limited value systems including rulers, finite gods, or relativism--only to fail. The absence of a Christian foundation eventually leads to breakdown, and those signs are visible in present-day culture as well. Can modern society avoid the same fate? In this latest edition of How Should...

One of the very few books I like to reread.

Published by Jmn , 8 months ago
This book put into perspective the culture today and the road we took to get here. IMHO, a very good read.

Published by JCB , 3 years ago
Unfortunately the book that I ordered in very good condition was a mess so I have not read it. However I contacted customer service and was completely pleased with the service that they provided in making it right

Published by Thriftbooks.com User , 19 years ago
Not many people know that there was a 10 episode film series with the same title, and that there is a paper back study guide that compliments this book. I first read this book 22 years ago when I was trying to figure out why the world was going to hell in a handbasket. It answered a lot of my questions and made me ask more questions. I rate this as one of the 10 most important books I've read in my lifetime, and I'm getting to be an old lady now. I'm getting ready to read it again because I feel it has a new relevance for our time in light of the persecution of Christianity in the public arena. I also bring to your attention his book, A Christian Manifesto. If you seek true wisdom born of knowledge, this is your book!

Published by Thriftbooks.com User , 22 years ago
This has to be one of the best books on this subject available thus far. It's *very* easy to understand, and it's not long or drawn out. Basically Schaeffer divides man and his view on the world into two categories; belief in an infinite God vs. humanism (belief in the absence of an infinite deity). The first creates a solid basis for morales, ethics and right and wrong. Man has *meaning* and a *purpose* in the world, something to hold on to and develop a strong sense of direction from. The latter induces that the world is of random chance (the big bang theory) and that man is nothing more than a machine. Morales are subjective to each person, a personal decision. There is no base for right or wrong, or good or evil. Man loses his sense of direction and ultimately, he falls. Schaeffer also provides a deep analysis of how science, in it's infancy, was based on the belief of and infinite God and how the early scientists were almost all Christian, like Newton. He describes the failure of the humanistic scientist back then and it's defeat against the Christian science and it's transition into the vice-versa of modern day. A fantastic read!

The Intellectual Foundation of the Modern Christian Right

Published by Thriftbooks.com User , 24 years ago
If you want to understand the terms of the culture war, and why so many people are dedicated to restoring Christian values in our society, read this book. Schaeffer explains his world view in terms of a divinely inspired Bible, it's truths, and why they are true. There's more, too. Even for the skeptic, this book provides an excellent background (used as supporting evidence) in Western culture, arts, philosophy, music, and architecture from the Roman Empire days until present. Schaeffer, in his 40 years of study and skepicism himself found the truth of the Bible and God's revelation alive in just about all mankind does. An excellent book. An excellent reference. Schaeffer is in the same league as C.S. Lewis and "Mere Christianity".
Trustpilot
Copyright © 2022 Thriftbooks.com Terms of Use | Privacy Policy | Do Not Sell or Share My Personal Information | Accessibility Statement
ThriftBooks® and the ThriftBooks® logo are registered trademarks of Thrift Books Global, LLC