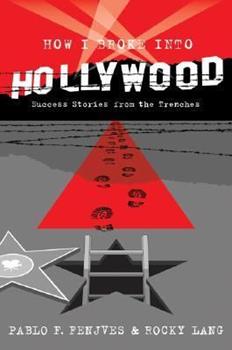 How I Broke Into Hollywood: Success Stories from the Trenches

Hollywood's survivors share their secrets to success -- where, they came from, how they made it, and how you can too In a heyday of reality television and overnight stardom, it's easy to forget that most players had to work hard to make it big. How I Broke into Hollywood brings together dozens of Tinseltown's greatest success stories, from legends Sydney Pollack and Lalo Schifrin to rising starlet Erika Christensen to ber-producer Gavin Polone. Icons...

Published by Thriftbooks.com User , 16 years ago
At first I thought this book wouldnt be that great because there are a lot of names that I didnt recognize when looking at the index of people interviewed. However, that is because a lot of the names are the behind the scenes people who may not be 'names' unless you study the credits at the end of movies. There are some very interesting stories here. There is one good interview where a guy indicates how he screwed people all the way to the top of his field and later himself was screwed by someone he trusted. Payback. Karma. I hated that guy, but Im glad he told the truth. Each interviwed person is shown in a photograph. This is a well crafted book, done in a simple way and it works.

Gathers dozens of Hollywood's greatest successes under one cover

Published by Thriftbooks.com User , 16 years ago
Major Hollywood stars had to work hard to break into the industry and make it big, but few places chart their stories under one cover. HOW I BROKE INTO HOLLYWOOD: SUCCESS STORIES FROM THE TRENCHES gathers dozens of Hollywood's greatest successes under one cover, including not just actors but writers, directors, designers and more to provide profiles of the best and how they worked to achieve their goals. Inspirational chapters profile nearly fifty such Hollywood success stories and will appeal to any interested in learning from experience. Diane C. Donovan California Bookwatch

Published by Thriftbooks.com User , 16 years ago
I loved this book, and highly recommend it to anyone interested in working in Hollywood, or to any creative type struggling to find career success. There are 67 first-person stories (from a variety of producers, actors, editors, lawyers, writers, etc.), and the interviewees have been incredibly generous in sharing not only their successes, but also their humble beginnings, self-doubts and failings. That willingness to show the true journey, warts and all, is what makes this book so inspiring, and such a gift. Many thanks to those who participated, and to the authors for making it happen. A word to the publisher: this book has all the hallmarks of a classic, but the cover art and title don't match the contents. I almost passed it over on the shelf because the graphic design looked low rent, and it seemed to just be the personal story of the two authors, whose names I didn't recognize (sorry, guys). When it comes out in paperback (which it should--promote this baby!), how about listing some of the well-known participants on the cover, and changing the title to How I Broke Into Hollywood, 67 Success Stories from the Trenches? This book is a winner!

Published by Thriftbooks.com User , 16 years ago
I thoroughly emjoyed this book, very readable, lively and interesting. The interviews flow like fascinating stories. The advice from those who made it will apply to almost any endeavor so the book should appeal to a wide audience.

Not for gossip-hounds, but great advice for those considering a Hollywood career

Published by Thriftbooks.com User , 16 years ago
If you are looking for some gossip-rag style tales of how Hollywood's biggest names got to where they are, then this isn't the book for you. There are a few big names in this book, Bernie Mac among them, but they are the exception rather than the rule. This book, rather, is a thoughtfully introspective look at how many of the behind-the-scenes people working in Hollywood accepted crushing rejection time and time again, dealt with monetary difficulties while pursuing their dream, the tips and tricks they used to become known and well-employed in Hollywood. Screenwriters, producers, actors, music supervisors, agents, and costume designers are featured, among other jobs, and their tales are inspiring and really helpful. Each person interviewed in this book really seemed to set aside their ego and talk truthfully about the times they doubted themselves and what could have made things go more smoothly in their journey to Hollywood elite. The advice given is really solid, and could benefit anyone in any career, but especially in the brutal film/ TV industry. I'd definitely buy this book for any friend considering trying to make it in Hollywood. The advice and stories are entertainingly given and would be valuable and interesting even if they didn't end up pursuing that particular dream.
Trustpilot
Copyright © 2022 Thriftbooks.com Terms of Use | Privacy Policy | Do Not Sell My Personal Information | Cookie Preferences | Accessibility Statement
ThriftBooks® and the ThriftBooks® logo are registered trademarks of Thrift Books Global, LLC