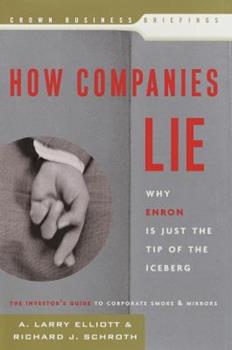 How Companies Lie: Why Enron Is Just the Tip of the Iceberg

by A. Larry Elliott and Richard J. Schroth

The questions investors need to ask . . . The answers corporate America must give about the true facts of corporate performance and value. During the 2001 baseball season, when games were played at Enron Field in Houston, a typical reaction was: "What the hell is Enron and what do they do?" Now we know more about the executives and inner workings of today's best-known rogue company than we ever imagined. But it turns out that Enron is just the most...

Published by Thriftbooks.com User , 19 years ago
In another era, we might have been tempted to shrug off How Companies Lie as just another polemic against corporate greed. In the wake of Enron, Global Crossing, Tyco and a host of other corporate scandals, however, we must (sorrowfully) admit that this book is as timely as it is insightful. Readers will gain much from the book's explanation of some of the actual accounting techniques that companies use to mislead investors, as well as its advice on how to spot telltale signs that a company might be cooking the books. While financial and accounting experts might find this analysis a bit basic, we from getAbstract recommend this book to all general business readers.

the crooks hire the cops

Published by Thriftbooks.com User , 19 years ago
This fortuitously timed book pulls no punches about the seriousness of the problem currently facing the stock market:"The scale and penetration of corrupting market processes is global....."According to the authors, investors have no choice other than to assume that everything corporations report or otherwise articulate is not all the truth. Investors must find ways to verify what is going on inside the corporations that hold their money, or they must decide that they have reason to trust the leadership team and place their bets on the people in charge.The authors point out that if financial planners and brokers are smart, they will begin to position themselves as "investor's representative" to the capital markets. Investors want to know more about the companies in their portfolio and how the professionals are making sure that money is not in the hands of the fakers. Investors may also want to see that their investment advisers have a little skin in the game as well.Here are some of the useful reforms suggested by the authors:1. If executive sells company stock, put 50% of proceeds in escrow for minimum of two years; audit companies would have to place 30% of their fees in same kind of account.2. Provide some kind of limited insurance (e.g. $100,000 maximum like FDIC) to protect individual investors from fraud, paid for by publicly traded corporations3. Have auditors report to SEC and paid through an "audit tax" (a pool of funds paid by corporations) rather than directly by corporations4. Have something like the Baldrige awards to recognize and reward companies based on the quality of their tools for verification of the financial data they report.5. Require financial reports to include, among other things:- all "off-balance sheet" debt, revenue, and taxes- all loans to customers, insiders and outsiders- measures to ensure employee ethics- measures taken by the audit committee of the board ensure that audits produce an accurate picture of company performance...

A Must Read For Many Investors

Published by Thriftbooks.com User , 19 years ago
This is a read not to be missed if you wander what is going on in today's corporations. Elliott and Schroth have come as close as anyone to date in looking at the entire problem facing todays corporations head on; not just all the accounting and finance problems. They don't mess around either in explaining their position. Agree with them or not, they lay out a very serious issue very simply and straight forward. What I find amazing is that WorldCom, Bristol-Meyers /Squibb, Nortel, Xerox are all discussed in this book. I found the Wharton review below the most helpful and probably the most credible of all the reviews on this book.

Published by Thriftbooks.com User , 19 years ago
Warning: This Corporation May Appear More Capable Than It Is At the very least, How Companies Lie: Why Enron is Just the Tip of the Iceberg should win an award for being first to market following the collapse of Enron, WorldCom and so many other companies. Authors A. Larry Elliott and Richard J. Schroth have written a pithy book that does not tell us much about the collapse of Enron that we didn't already know. Yet the book does us a service by standing firm in its conviction that this seemingly endless rash of corporate greed and stupidity at the highest levels is inexcusable and requires major structural changes in the business of business.Elliott and Schroth are consultants who are intimately familiar with the world of Fortune 500 companies. They believe that a new management science, one not taught at business schools, arose over the past decade as a result of the booming economy: "managed mendacity." The authors explain their term: "Lies and deception help the inner circle achieve personal goals of greed and cover up their incompetence as executives." And they argue that managed mendacity can be found in virtually every industry and every business. "The same processes are in play whether books are being cooked, tobacco executives are testifying that nicotine is not addictive, airlines are telling you that flights are really on time and that security is being improved, or Ford is telling you that those Explorers are safe..." Elliott and Schroth are firm in their conviction that the executives running companies that have failed should not have been in charge. The authors tell us that these men (and it is interesting that virtually all are men) were simply playing a game: "Gamesmanship has replaced business management competence as executives and their boards have focused on managing the stock first, the business second and strategic value last." We have come full circle back to Michael Maccoby's Gamesman of a generation ago, only the 1990s version seems to have no grounding in morals or ethics.The authors rightly take boards of directors to the woodshed, calling them an "underperforming asset" and pointing out that "very few people can tell you exactly how a board adds value to the corporation." It is the board that should provide oversight and review of all corporate practices and hold executives accountable. The always-prescient Peter Drucker wrote back in 1954: "A dishonest chief executive can fool an outside board, though not for long if its members demand the information they should be getting and ask the questions they should be asking." Elliott and Schroth argue that "boards should be one of the prime intellectual capital assets of the corporation, and their insight into the best practices in business should set a high standard for conduct at the executive level."The authors argue for much greater powers for the SEC to dig into a corporation's books and its accounting practices. They seem to place a great deal of stock in the ability of

A "Must Read" Book for the average investor

Published by Thriftbooks.com User , 19 years ago
Don't let the Publisher's Weekly review prevent you from reading this book. The reviewer didn't like it, but Publisher's Weekly has since named it " Book of the Day." Although this is published as a business book, it is not just for those in the corporate world. I found it a fascinating, insightful, informative, and very understandable book for those of us referred to as the "average" investor. We are the people now watching our retirement funds vanish and trying to figure out how all this happened, and why we weren't warned earlier about "the smoke and mirrors" of big business. The authors saw the current business crisis coming; as they noted, they wrote this book considerably before the Enron situation was exposed, and they warned of impending problems, not only with Enron, but with WorldCom, Xerox, Exxon, and a host of others. If they saw the coming debacle, one question that begs to be answered is why those who are supposed to safeguard investors' hard earned money did not also see and do something about it? The most important question remains - what should be done to prevent a crisis of this magnitude from ever happening again; this book has the answers.
Trustpilot
Copyright © 2022 Thriftbooks.com Terms of Use | Privacy Policy | Do Not Sell My Personal Information | Accessibility Statement
ThriftBooks® and the ThriftBooks® logo are registered trademarks of Thrift Books Global, LLC