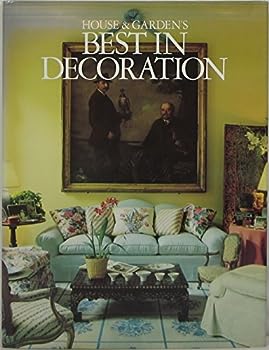 House and Garden's Best in Decorating

This extraordinary book features some of the most exciting work of the world's most talented and prestigious contemporary interior decorators. The selections are divided into two categories: work the decorators have done for clients and that which they have done for themselves. More than 250 full-color photographs.

Yes, They ARE Among the Best

Published by Thriftbooks.com User , 13 years ago
During Louis O. Gropp's tenure as editor of Conde Nast's "House & Garden", it was arguably the best shelter magazine of its day. And the 1987 book BEST IN DECORATION proves the point, showing stylish project after project by the big name decorators of the 1980s. There is some accompanying text, but the main feature is the color photography of the lavish interior spaces, mostly traditional U.S. residences, but some modern and European interiors are shown as well, with the book divided into two parts. PART ONE DESIGNERS AND CLIENTS shows the teaming of many great names such as Geoffrey Bennison for the Baron and Baroness Guy de Rothschild, Mario Buatta for Taki Theodoracopulos, Roderick Cameron for Anne Cox Chambers, Denning & Fourcade for Oscar de la Renta, Mac II for Bill Blass, Renzo Mongiardino for Elsa Peretti, and Parish-Hadley for Enid Annenberg Haupt, among others. PART TWO DESIGNERS AT HOME shows the homes of decorators such as Vincent Fourcade, Jacques Grange, Albert Hadley, Sister Parish, Renzo Mongiardino, John Saladino, and Henri Samuel, among others. With the exception of a cottage that is the Hamptons pied-a-terre for Joel Dean of the high-priced food market Dean & DeLuca, the interiors are far from strict representational examples for the average homeowner. But they are a treat for all who can interpret design philosophy and this is a great high style reference.
Trustpilot
Copyright © 2022 Thriftbooks.com Terms of Use | Privacy Policy | Do Not Sell My Personal Information | Accessibility Statement
ThriftBooks® and the ThriftBooks® logo are registered trademarks of Thrift Books Global, LLC