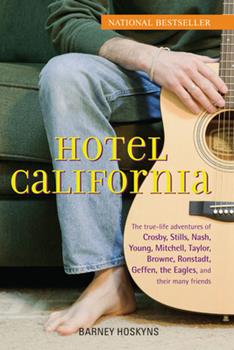 Hoskyns brings a genuine love as well as an outsider's keen eye to the rise and fall of the California scene. . . . This is a riveting story, sensitively told. -- Anthony DeCurtis, Contributing Editor, Rolling Stone From enduring musical achievements to drug-fueled chaos and bed-hopping antics, the L.A. pop music scene in the sixties and seventies was like no other, and journalist Barney Hoskyns re-creates all the excitement and mayhem. Hotel California...

Down, but not a downer.

Published by Thriftbooks.com User , 13 years ago
Hotel California is a great read. I have CDs by almost everyone in it so I am a little prejudiced.

Of Egos and Eagles

Published by Thriftbooks.com User , 15 years ago
A superbly involving narrative history of an extraordinarily fertile era for American popular music. Hoskyns examines the tension between creativity and commerce that was beginning to make itself felt big-time in the late 60s and clarifies the relationships - musical, business and personal (and the many and varied permutations thereof) - that existed during this remarkable period. I recognised all the names - Ronstadt, Souther, Mitchell, Browne, Mama Cass, The Byrds, Geffen, Young, Crosby, Stills, Nash etc. - but, until now, wasn't completely aware of how they all fitted in to the bigger musical picture. It's an extraordinary tale of monumental egos and of idealism turning sour: the sunshiny optimism of California in the 60s, when anything seemed possible, giving way to the darker cynicism of the 70s as the LA scene imploded, the Eagles stopped talking to each other, the men-in-suits seized power and punk reared its less-than-pretty head. Next stop for me: Hoskyns' "Waiting For The Sun"; Richie Unterberger's two books on folk-rock and John Einarson's "Desperados: The Roots of Country Rock"...and a lot of CDs. NB: The edition I have of this book is a UK paperback (with the somewhat briefer subtitle "Singer-Songwriters and Cocaine Cowboys in the LA Canyons, 1967-1976" (ISBN: 0007177054)) which contains additional material including an interview with the author and a re-printed newspaper article by Hoskyns on singer Judee Sill

Published by Thriftbooks.com User , 15 years ago
I just came back from Aruba and this book was my choice for reading on the beach. I chose wisely this book was great. I am a big fan of the whole country rock scene so it fed into and added to what I knew about all of the music being made back then. Pick it up you will not be disappointed.

Published by Thriftbooks.com User , 15 years ago
This is a guilty pleasure. I loved the music that came out of the LA country rock scene of the early '70's. This book revisits that scene with some "beyond the music" type perspective. Mr. Hoskins takes us into the legendary Troubador club, the drugged out parties and into the recording sessions of Ronstadt, Browne, the Eagles, CSNY, Joni Mitchell, and the incomparable JD Souther. Mr. Hoskins can cram more names into one paragraph than any writer I know. If you are not familiar with the names it might make for some tough sledding. Most of the material seems to come from interviews (most of which were conducted by Cameron Crowe - he should get co-author credit). It was a fun, easy read that took me back to a time when some of the greatest music ever was created. I found myself needing to listen to JD, Jackson, Linda, etc. while reading this fun book.

Published by Thriftbooks.com User , 15 years ago
The definitive book on the California sound from the Laurel Canyon 60s to the cocaine addled 70s, it's all here. Special emphasis is paid to David Geffen's venture from agent to music record company owner and his specific group of artists, Jackson Browne, Eagles, JD Souther and Linda Ronstadt. The rest of music history also is here like the singer/songwriter hangout, the Troubadour. This is a fascinating period that celebrates political upheaval and the influence of songs written with meaning vs. pop love songs. For anyone with an interest in popular music, American culture or Los Angeles specifically, this is worth the read and I strongly recommend it.
Copyright © 2020 Thriftbooks.com Terms of Use | Privacy Policy | Do Not Sell My Personal Information | Accessibility Statement
ThriftBooks® and the ThriftBooks® logo are registered trademarks of Thrift Books Global, LLC