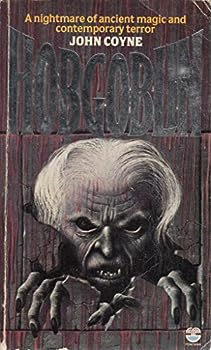 This description may be from another edition of this product. Ancient magic meets contemporary horror in this thrilling tale of a young man's obsession. Scott Gardiner is already shattered by the demise of his character in a sword-and-sorcery fantasy. When his...

Published by Thriftbooks.com User , 13 years ago
HOBGOBLIN Scott Gardiner is weird. He thinks the monsters in his fantasy game are real. He thinks he sees Hobgoblins at the castle where his mother works. He thinks his girl friend is being stalked by the Black Annis because of what happened to her in the graveyard. He thinks his high school is filled with blood-spewing Gorfs and flesh-hungry Groundbats from the darkness of Irish legend. Scott Gardiner is right. So he's throwing the biggest party of the year. ON HALLOWE'EN.

Published by Thriftbooks.com User , 16 years ago
I first read this book in 1982 and have read it again a few times. Each time I read it I am reminded of just how well it is written. Whether you are into fantasy role playing games or not, this book is a great escape story and a thoroughly enjoyable read. What a nice break from today's formula of retired/fired cop/lawyer/investigator called back to duty to solve the latest murder/kidnapping/white collar crime. The author integrates a unique story line that is easy to read yet intricate enough to hold a mature interest. Anyone from teenagers on up would enjoy this book.

Published by Thriftbooks.com User , 20 years ago
Written back in the days when Dungeons & Dragons was at it's most popular, this is a book about a teenage boy who gets caught up in the character he plays in a role playing game based on Irish mythology. It is a thrill of a book with many twists and turns. The lead character may just be a bit insane but he is not completely off his rocker. The things he sees may not be real but there is deffinately something strange going on in this town he and his mother have come to live in. John Coyne puts together a great tale of seemings and dreamings. What is real? What is fantasy? "Hobgoblin" comes to a close with a very satisfying end. All is explained, there are no loose ends. I highly recomend this book.

Published by Thriftbooks.com User , 21 years ago
Though this novel is now out of print, it is usually available at public libraries or secondhand paperback bookstores. It is an intriguing novel about a teenager whose perception of reality becomes blurred when his favorite hobby, a Dungeons & Dragons-type roleplaying game based on Irish mythology called "Hobgoblin", seems to intrude upon reality. When Scott Gardner, the teenaged protagonist of the novel, thinks he sees a Black Annis creeping around the woods of his new home, I guarantee that you will be hooked into reading this story. This novel came under some criticism, perhaps justifiably, when it was released because the lead character "matures" (?) by giving up role-playing games at the end of the novel. As a role-player myself, I found that the character's motivations were entirely plausible, and that this novel of horror and suspense would be enjoyed by a wide variety of people. The characters are uniformly well-drawn, and the fantasy world of Irish legend, as drawn by the author, is both inviting and sinister at the same time. When I first read this novel as a teenager myself, I very much identified with the main character. As an adult, my appreciation of HOBGOBLIN has not diminished. Though the novel may have its flaws, I can only say that I have read it several times, and I rarely re-read anything. It should not be be confused with the ignorant, tabloidistic "Mazes and Monsters" novel which also was published around the same time. There is no comparison between the two books.

A Rich Recipe of Gothic Horror and Fantasy

Published by Thriftbooks.com User , 22 years ago
I read this book when it first came out. I felt as lost and afraid as the main character, and his story touched my heart. It also scared me silly! I loved the gothic flavor of this novel, a taste that has stayed with me even 16 years later. This is perhaps one of my favorite books, ever!
Copyright © 2020 Thriftbooks.com Terms of Use | Privacy Policy | Do Not Sell My Personal Information | Accessibility Statement
ThriftBooks® and the ThriftBooks® logo are registered trademarks of Thrift Books Global, LLC