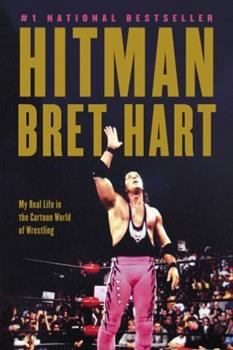 Hitman: My Real Life in the Cartoon World of Wrestling

Written without collaborators and based on decades of tape recordings he made throughout his career, HITMAN is Bret Hart's brutally honest, perceptive and startling account of his life in and out of... This description may be from another edition of this product.

Published by Amy , 5 months ago
Love to learn about how Bret made it as a wrestler good pictures are in the book too

History as taught by Bret Hart

Published by Thriftbooks.com User , 14 years ago
In this massive wrestling autobiography, Bret Hart took 7 years to compose this 550+ page tome, chronicling his life and his role in the wrestling business. I found this text could be broken into a couple of attitude categories. The first is the humble section in which Bret Hart tells of his early life and growing up in the Hart household among a dozen siblings, breaking into the business, and the struggling days of Stampede Wrestling. He talks of his friendships with the regular wrestlers from the territory such as Big Daddy Sika, Andre the Giant, Abdullah the Butcher and into his fledgeling beginnings with Tom 'Dynamite Kid' Billington, his brothers, Bad News Allen, Cuban Assassin and others. It is very heartfelt and, shall I say, realistic in that he quickly falls in love with the business and its perks. He then gets picked up by the WWF as part of a deal Stu Hart makes in selling Stampede. The second phase is Hart's journey through the mediocre rise of his character in the early days of his WWF career. Hart reminisces of his world travels and his infidelities, early drug use, and the beginnings of the Hart Foundation. We begin to get his opinions on established wrestlers and the up-and-comers. He then makes a statement about how the world champion belt holder tends to become tyrannical, demanding, and power hungry, often stepping on or ignoring the talent while never wanting to willingly relinquish his hold. Bret Hart claims this never happened to him but through his own words you can see the switch between Humble Bret and Arrogant Bret. Now, in his opinion, he's one of the only few good workers in the business and he always came up with great matches no matter who he had to work with. Hart also gives big breaks to new guys and claims to do whatever is right or good for the job and put anyone over that needs to be. He portrays himself as a savior for the business and without him, wrestling's popularity may not have climbed so high or developed such stars. He speaks highly of many incoming wrestlers like Shawn Michaels, Demolition, and Curt Hennig, while beginning his down views of the likes of Ric Flair, Hulk Hogan, and Ultimate Warrior whom he claims are non-workers and power hungry players. This era starts pretty much after he is given the title and runs through, you guessed it, the Montreal screwjob. The third attitude portion of this book begins the transformation from Arrogant Bret to Vengeful Angry Bret. It starts with Shawn Michaels' rise to superstardom and becomes full force with the Montreal screwjob. Enough has been written about that incident so I won't speak of it. From here, Bret falls out with McMahon and his now WWE. Hart heads to WCW to join former WWE employees and finds life to be miserable, unprofessional, and the storylines fall to the ridiculous as well as titles meaning nothing. He becomes angrier about the business and his career of bumps is finally starting to take its toll on his body. Then the news of Owen's dea

Sad eye opening story of my all time favorite wrestler

Published by Thriftbooks.com User , 14 years ago
The book alone was huge, well over 500 pages! Still I could not put it down. Bret did a great job of taking us through his life and had a lot to share with the readers. Here are my thoughts: First my cons: 1. He showed no remorse about all his affairs. I respect how open and honest he was about that part of his life. However I'm sure it had to hurt for ex-wife Julie to read about it. 2. I would have loved for him to write about working with Vince on his DVD project and what it was like to receive the Hall of Fame induction. Now the pros, and they are a lot of them: 1. I don't think we will ever truly get the whole story from Vince regarding the Montreal Screw job. That being said, I think Bret's version can be backed up by several sources, where Shawn's story seems like it was drawn out of the air. 2. I loved how he was able to be objective about most wrestlers. Honestly in parts of the book he was even nice talking about Shawn Michaels. It was interesting seeing the rise and fall of many great wrestlers. 3. He didn't sugarcoat or go out of the way to bash his family. I felt like Diana Hart Smith went out of the way to try to hurt the family. I thought Owen's widow at times did the same. Bret wasn't perfect, but I found him a lot more objective than 95% of his family. 4. I loved hearing about stories from the road as well as some of crazy nights out. I found it ironic that the heels tended to be the people that were genuine and nice, while some of the top faces were some of the biggest jerks you will ever meet. There was a story about the Ultimate Warrior that really got the point across. 5. I loved how he made it a point to talk about every wrestler he worked with. 6. He spared no expense talking about his late parents. I found that to be an enduring quality. You can tell that despite the craziness he loved both Stu and Helen Hart. 7. I completely respect the fact that he can own up to not being perfect. Sometimes I felt like he was writing a love letter to himself, then when I was convinced, he came out and talked about how he felt he didn't live up to being a strong father/husband. 8. I liked how he's not bitter in the end, but at the same time he doesn't tell us that he lives "Happily Ever After". I sincerely hope that life gets better for Bret and that he can have peace with his life. Also I hope that one day HBK will grow up and apologize, but I won't hold my breath. Overall, I think the only wrestler autobiography that is on par with this one is Mick Foley's. It's a must read.

Published by Thriftbooks.com User , 14 years ago
This book blew away my expectations. Having read many of Bret Hart's articles in the Calgary Sun, I already knew that the "Excellence of Execution" is one who writes with sincerity. However, when I purchased this autobiography, I didn't expect him to be this brutally honest! And that's a good thing. There is no question about it, this is an R rated book (if there is such thing), which, needless to say, is not suitable for children. Wild stories of sex, drugs, and violence are casually narrated all throughout the book. However, to be fair, this autobiography has much more substance than just a series of wild tales. Bret tells us a great deal about the Hart family, the feuds they had, the good times and bad times they shared. He writes about his childhood and early years working for his father's famous Stampede Wrestling promotion in Calgary. From there he takes us oversees to countries like Puerto Rico and Japan where he nonchalantly recounts some bizarre stories that range from prostitution to narcotics. Some of Hart's recollections are quite funny, actually. However, by the end of the book, it's the tragedies that stand out. Of course, Hart also elaborates on his illustrious career in the WWE where he became famous, and tells us about the friends he's made, the countries he's travelled to, the contracts he signed, his business relationship with WWE guru, Vince McMahon, and a whole lot more. Because of his many accomplishments in the ring, which he proudly writes about, I think certain readers will interpret that as being arrogant or narcissistic, especially when he writes about the loyalty of his fans and the many great matches he's had. Granted, when you look at it at face value it does appear like he's bragging about himself. But that's not the case. If you watch video footage of his fans' reception of him and the so-called "great matches" he's referring to, you'll see that he isn't bluffing at all. Indeed, many of his fans adored him a great deal and he did have many great matches. Personally, I found it surprising that Bret Hart reveals so many of his most personal experiences, such as drug use and infidelity, which he discusses very openly. In fact, he seems rather comfortable recounting all the various strip clubs he attended and all the women he's slept with (while still married). I couldn't help but to feel sorry for his ex-wife, who I'm sure has been through hell. And although he does express a small degree of regret and shame over his actions, for the most part, he's not too apologetic. If anything, there are instances where he actually excuses and justifies some of his old immoral conduct, which caught me off guard. But regardless, like him or not, you have to give him credit for being so sincere, instead of sugar-coating his lifestyle and exhilarating his self-image. This, in my opinion, is what makes this autobiography so genuine. I highly recommend it.

Published by Thriftbooks.com User , 15 years ago
I got this book shipped in from Canada because I couldn't wait and I'm thrilled to say that it is THEE best "wrestling biography" out there. It blows Michaels', Flair's and Foley's outta the water (and Foley's is a best seller). I got it earlier this week and am done with it. Bret's account of matches, oversea's tours, backstage politics and his bitter rivalry with Shawn Michaels are very well written. To read about all the sorrow and grief he encountered from Owen's death to his father's death will bring any wrestling fan to the brink of tears if not fully shed. I cannot stress how phenominal this biography is. Bret tells it like it is because the WWE didn't have their hands in it. I love how he has stayed loyal to himself just like he did his fans all those years. BUY THIS BOOK!

The New Standard for Wrestling Books

Published by Thriftbooks.com User , 15 years ago
Quite Simply this book may be the best there is, the best there was, and maybe the best there ever will be about a man's journey through the crazy world of Pro Wrestling. There are stories filled with Humor(Though if you are expecting something like Mick Foley's Book look elsewhere), Sadness, and Hardship. Bret is very open and honest about the world he lived in, and pulls no punches when talking about the drinking, drugs, and Affairs that went on in his life. You'll also get a close look with people that shared his journey along the way, Tom Billington(Dynamite Kid),Davey Boy Smith and members of the Hart Family. I cannot reccomend this book strongly enough.
Trustpilot
Copyright © 2022 Thriftbooks.com Terms of Use | Privacy Policy | Do Not Sell or Share My Personal Information | Accessibility Statement
ThriftBooks® and the ThriftBooks® logo are registered trademarks of Thrift Books Global, LLC